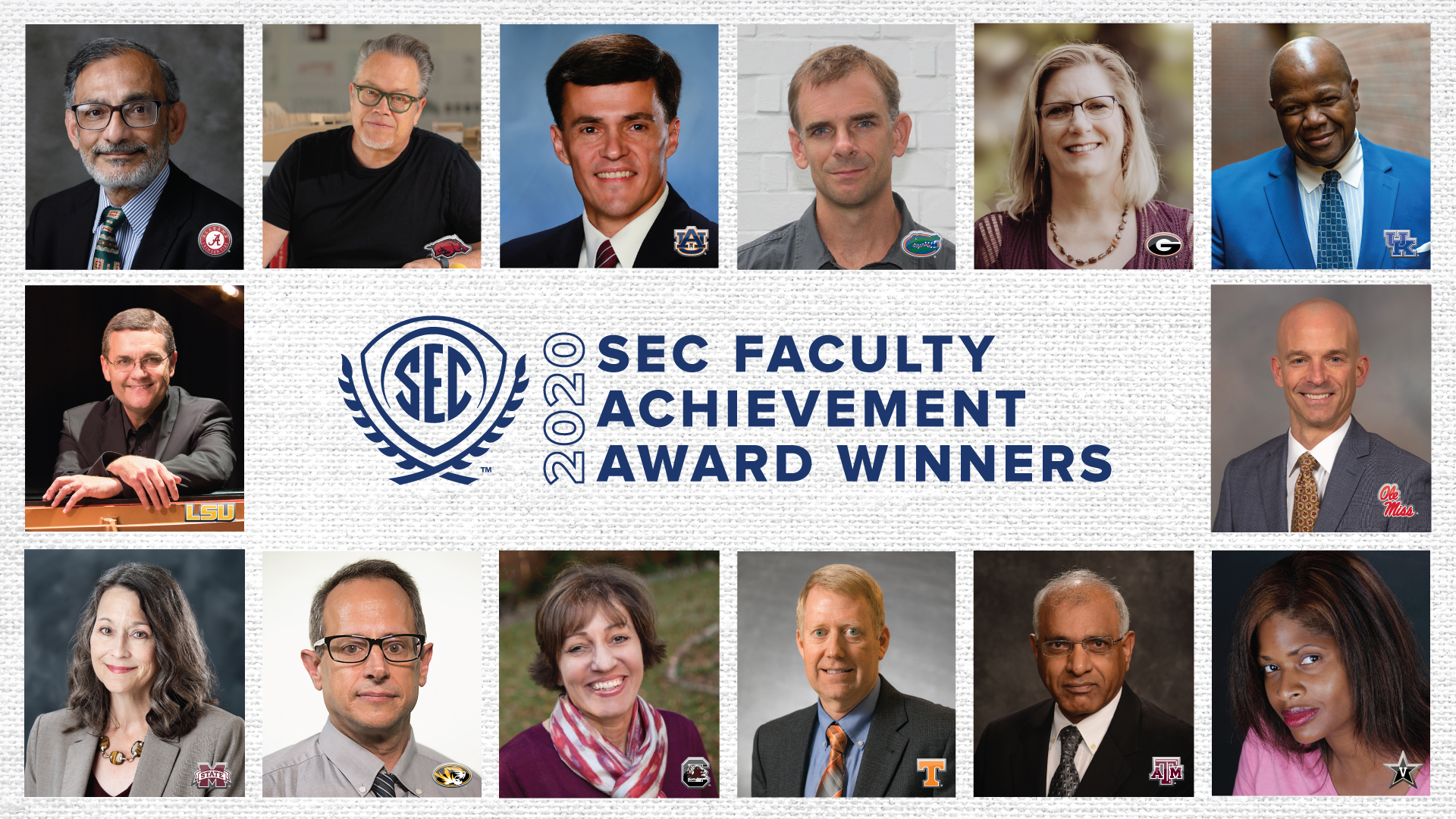 This spring semester hasn’t been easy on our teachers and researchers. But as expected, SEC faculty have responded with resilience, creativity and compassion in light of the upheaval brought upon by COVID-19.

Of course, it is not unusual for SEC professors to go above and beyond their standard calling, as evidenced by the decades of service and commitment demonstrated by the 2020 SEC Faculty Achievement Award winners.

The SEC Faculty Achievement Award was first presented in 2012 to shine a spotlight on one professor from each member university who has displayed excellence in teaching and research, particularly at the undergraduate level. Each winner receives a $5,000 honorarium and memento from the SEC while becoming his or her university’s nominee for the SEC Professor of the Year Award.

We are thrilled to give you a brief glimpse into this year’s group of recipients and their honorable work in classrooms and research laboratories around the Conference.

With four decades of commitment to the University of Alabama, Dr. Subha Chakraborti is a fixture on the Capstone. A Professor of Statistics in the Culverhouse College of Business, he’s co-authored two highly acclaimed books and published more than 100 journal articles, all while being praised for his mentorship on and off campus. His university honors include the Burlington Northern Faculty Achievement Award and the Burnum Distinguished Faculty Award.

Marlon Blackwell’s design mind has transformed the University of Arkansas’s Fay Jones School of Architecture and Design and his firm, Marlon Blackwell Architects. His trophy case is packed with educational and professor honors, but his latest award might be his biggest: Blackwell, a Distinguished Professor and the E. Fay Jones Chair in Architecture, recently received the 2020 Gold Medal from the American Institute of Architects, the Institute’s highest honor. And to top it off, he was selected as the 2020 SEC Professor of the Year!

Dr. Douglas Martin received his bachelor’s degree as well as his Ph.D. from Auburn University, so it’s only fitting that he returned to his beloved alma mater to continue his work, where he is currently Professor of Anatomy, Physiology and Pharmacology in the College of Veterinary Medicine. His research has been immensely beneficial, focusing on molecular therapy strategies to combat neurogenerative disorders like Tay-Sachs disease.

This recognition won’t be a surprise to University of Florida students since Dr. Charlie Hailey, Professor of Architecture, was honored as the university’s Teacher/Scholar of the Year in 2019. He is well known in the academic and design communities for research that draws connections between cultural landscapes and the human agencies that built them. And his books – Slab City and Campsite – have become important architectural texts during the last decade.

One of the most sought-after minds in her field, Dr. Lillian Eby, Professor of Psychology at the University of Georgia, has been acknowledged as an expert on mentoring relationships. She has conducted ground-breaking research on the potentially harmful aspects of mentoring, and it’s no wonder she has been a valuable mentor to her students. Dr. Eby’s latest accomplishment is becoming the first woman named editor in chief of the Journal of Applied Psychology.

As you might glean from his bio, Dr. Everett McCorvey is something of a Renaissance man in the world of music and performance — conductor, director, actor, producer, impresario, and of course, mentor and teacher. A Professor of Voice at the University of Kentucky, he has performed in Tony Award-winning productions, conducted a symphony in Prague, founded the American Spiritual Ensemble, worked on six PBS documentaries, and so much more.

Two decades of outstanding service recently earned Dr. Willis Delony LSU’s highest academic ranking, the Boyd Professorship. Although his mentorship of young pianists is his academic calling card, his influence goes far beyond Baton Rouge. As one of the world’s leading musical minds in jazz and classical genres, he’s composed numerous scores and recorded several albums, all while performing around the world.

When he’s not out on rounds, Dr. Alan Jones is building upon his stellar reputation at the University of Mississippi Medical Center. As a medical doctor focused on sepsis and life-threatening infections, he is a Professor of Emergency Medicine and has received more than $27 million in grant funding. In the classroom, he’s passed down his expertise by training and mentoring hundreds of students and future doctors.

Those who know Dr. Renee Clary know she stays busy. A Professor of Geology, she’s director of Mississippi State University’s Dunn-Seiler Museum, director of the 15 Degree Laboratory and co-founder of the EarthScholars Research Group. But her passion is in the classroom, where she teaches and mentors geology students with a focus on environmental geochemistry and paleontology. We’ve heard she has a dinosaur in her garage, too…

For more than two decades, Dr. Anthony Lupo, Professor of Atmospheric Science, has been a campus favorite at Mizzou, winning the University of Missouri Professor of the Year Award in 2010. A long-time member of the American Meteorological Society, his research and work on large-scale atmospheric dynamics and climate change — including serving on United Nations panels — have been valuable contributions in the fight to save the planet.

A virtuoso on the violin, Dr. Gail Barnes has performed with symphonies and operas, conducted orchestras, co-authored books and presented teaching clinics around the country. And for more than two decades, the Professor of Music Education has called Columbia home, teaching courses ranging from orchestra literature for undergrads to sociology of music education for grad students, all while serving as director of the nationally recognized USC String Project.

Dr. Leon Tolbert, Professor of Electrical Engineering and Computer Science in the Tickle College of Engineering, holds nine patents and is a registered professional engineer in the state of Tennessee. A founding member of CURENT, the National Science Foundation/Department of Energy research center for electric grid technology, he received the NSF CAREER Award and the University of Tennessee Chancellor’s Citation for Professional Promise in Research and Creative Achievement, twice.

As a member of the U.S. National Academy of Engineering and a foreign fellow in the Indian, Canadian, Chinese, Spanish and Brazilian academies, Dr. J.N. Reddy has shared his expertise around the world. And with 21 books in his bibliography — including several that are used as textbooks — this Regents’ Professor in Mechanical Engineering is a legend in the discipline and in classrooms at Texas A&M University, where he’s taught and mentored generations of future engineers.

Dr. Tracy Sharpley-Whiting, Gertrude Conaway Distinguished Professor of Humanities (African American and Diaspora Studies and French) at Vanderbilt University, is one of the busiest women on campus. She was named a top 100 young leader of the African American community by The Root, is a frequent guest on cable news programs and has authored or edited 15 books and three novels, including one on gender politics in hip-hop.