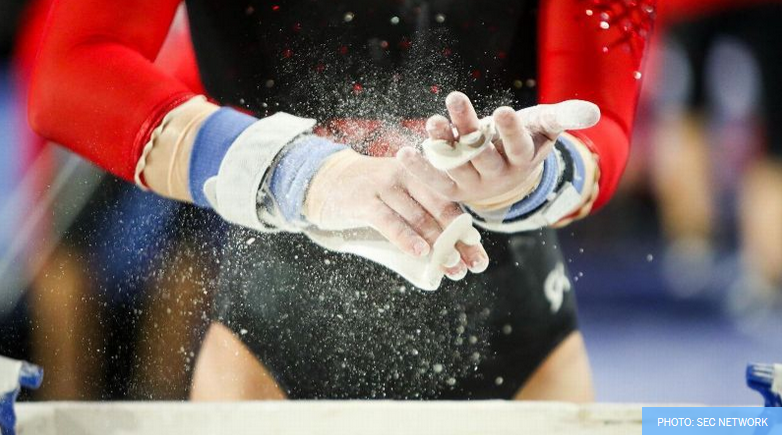 Alonza Klopfer, Junior, All-Around, Alabama
Klopfer leads the Crimson Tide in community service hours, giving of her time to Skyland Elementary Readers, the Crimson Tide’s Halloween Extravaganza, ReadBAMARead, Project Angel Tree, Alabama’s Thank-a-Thon and the RISE Center Holiday Party as well as helping guide the Tide’s community service efforts as a member of the Alabama Student-Athlete Advisory Committee’s Executive Board. A three-time Scholastic All-American and three-year member of the SEC Academic Honor Roll, she has been a mainstay of the Crimson Tide’s balance beam lineup throughout her career, with career-best scores of 9.9 coming multiple times during her career from the leadoff position. A President’s List (4.0 grade points average) and Dean’s List (3.5 or better GPA) student during her UA tenure, Klopfer also competes in the Tide’s floor exercise lineup, scoring a career-best of 9.850 on multiple occasions.

Savannah Pennese, Junior, Arkansas
Pennese has been one of the most active student-athletes at Arkansas this year, taking on community service opportunities time after time during the pandemic. She started participating in Zoom Chats with patients at Arkansas’ Children Hospital in May and continued to make an impact wherever she could, including writing letters to front line workers at Arkansas’ Mercy Hospital. Pennese also helped pack food items for the University of Arkansas’ on-campus food pantry, the Jane B. Gearhart Full Circle Campus Food Pantry. Since the fall semester, she has participated in holiday basket packing for the less fortunate at the local Boys and Girls Club as well as a Valentines for Veterans service event at our local Veterans Affairs Hospital in February.

Meredith Sylvia, Senior, Auburn
Sylvia has been a staple in the Auburn community since she arrived on the Plains in 2017. Most recently, she has spent many hours dedicated to the Lee County Humane Society. With the restrictions that came from the COVID pandemic, Sylvia sought out other ways she could help the community and became a foster home for animals from the local shelter. To this day, she has fostered animals that needed homes and provided relief to over-flowing shelters in the area. Sylvia has cared for over 20 different animals since the pandemic started last spring. Prior to the pandemic, Sylvia spent many hours with local elementary and middle school students. The aspiring middle school teacher worked with Our House, a non-profit that provides resources to underprivileged families, tutoring and mentoring middle school and elementary students by providing help with classwork. In addition, she encouraged positive behavior and excitement for learning. Sylvia had also served the community on many occasions with her team as well as the Student-Athlete Advisory Committee. With the team, she has participated in the yearly Auburn Downtown Trick or Treat event, where athletes greeted fans and passed out candy to kids. Sylvia has also spent time with local elementary students, showcasing gymnastics skills and encouraging the importance of exercise. She has been involved in a handful of Habitat for Humanity service projects through Auburn SAAC. She volunteered in 2017 and then served as the coordinator of the service project in 2019.

Florida
Gator gymnastics pledged in the summer of 2020 to bring awareness to social issues. With that in focus, team members participated in a peaceful Black Lives Matter march in Gainesville and in their home areas. Several were Gator Athletics founding members of the Black Student-Athlete Council. The BSAC worked with the Student-Athlete Advisory Committee (two gymnasts part of the Executive Board) for a Townhall Zoom. The Gator Athletics Pride Committee’s founders include Gator gymnastics team members and they played a big part in planning the team’s first Pride Meet. Temporary tattoos with messages of “Equality” and “Black History” were part of meet attire in 2021. Gator gymnastics was vocal on social media to get the message out for voter registration and voting as part of the #GatorsVote initiative. The team also held its annual Harvest Food Drive, participated in the Making Strides Against Breast Cancer Walk and joined a community clean-up for MLK Day of Service.

Rachael Lukacs, Junior, Georgia
For the third consecutive year, Lukacs stands out as Georgia’s leader in Community Service. With her bubbly personality and genuine heart for others, she goes above and beyond her call of duty to the UGA and Athens community. Lukacs is heavily involved with Extra Special People (ESP) and volunteers at swim practice at least two hours a week on top of hosting the Special Olympics Gymnastics group in the facility each week. She is involved with “Reading with the Stars,” reading to young children at a local elementary school. Lukacs has given her time to the animal shelter and the Food Bank of Northeast Georgia, donating and packing food, as well as volunteering at numerous marathons and those of the like around the Athens area. She is a devoted member of the Georgia and Athens community and her efforts will continue to spread as she grows as a student-athlete at UGA.

Raena Worley, Sophomore, Kentucky
Despite limited opportunities for community engagement due to health and safety protocols, Worley has dedicated more than twice as many community service hours as her closest teammates. The bulk of her hours were spent at Flip Fest Summer Gymnastics Camp, where she taught children the sport of gymnastics. Worley also spent time at a local elementary school, where she assisted students with reading and math. In addition to being an SEC All-Freshman athlete and two-time SEC Freshman of the Week honoree last season, she was also named a WCGA Scholastic All-American and SEC First-Year Academic Honor Roll student.

Olivia Gunter, Senior, LSU
Gunter has completed community service projects including McMain’s Wheels to Succeed, the Blue-Ribbon Soiree benefiting prostate cancer research and volunteer work at LA Key School and Gardere Elementary School. She has also helped organize and put on family-friendly events like the annual LSU Halloween Boozar and Spook ‘N’ Rowe. Gunter has volunteered for organizations like the children’s Knock-Knock Museum, Our Lady of the Lake Children’s Hospital, and the Big Buddy Program. She also participated in the St. Jude in-person and virtual walk and fundraiser. Gunter is a member of the Student-Athlete Advisory Committee as well as the team lead for Athletes for Hope. Through SAAC, she was selected for the 2020 NCAA Career in Sports Forum. Gunter was also named the student-athlete of the month for Athletes for Hope this past September.

Chelsey Christensen, Senior, Missouri
Christensen has been an active member of the Columbia community in her time at Mizzou. She has volunteered time with Playing 4 Hope, an organization that connects children in the hospital with collegiate athletes in the hopes of forming an everlasting relationship. Christensen has also spent time at local elementary schools, Ronald McDonald House, Voluntary Action Center, The Foodbank for Central and Northeast Missouri, Food Recovery Network, Caleb’s Pitch and with the Special Olympics.