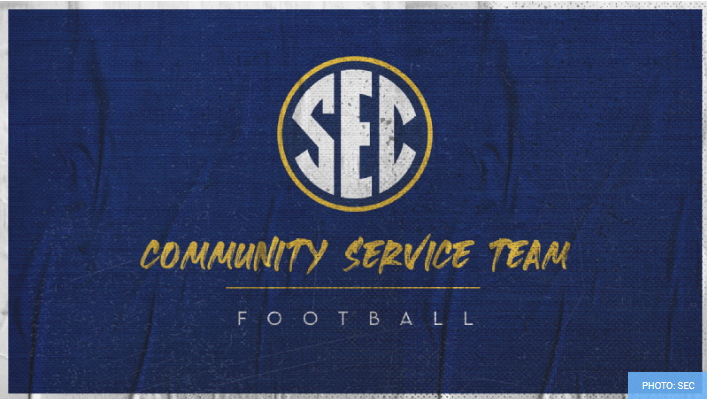 BIRMINGHAM, Ala. – The Southeastern Conference on Wednesday announced the Community Service Team for the sport of football prior to the SEC Championship Game to be played Saturday at Mercedes-Benz Stadium in Atlanta.

The SEC names a Community Service Team for each of its 21-league sponsored sports, looking to highlight an athlete from each school who gives back to his community through superior service efforts.

The 2022 SEC Football Community Service Team is as follows:

Emil Eikyor Jr., teamed up with Samaritan’s Feet to provide 25,000 students (aged four to 14 years old) in Alabama with a new pair of shoes before they returned to school in the fall of 2022. He also volunteered to work on the Nick’s Kids Foundation Habitat for Humanity House No. 18, spoke at the Tuscaloosa Juvenile Detention Center, volunteered at the Alberta Unity Project and read for students at various elementary schools around Tuscaloosa County.

Cam Little is involved with Down Syndrome Connection of Northwest Arkansas. For the second straight season, he is donating money for every field goal he makes. This season he is donating $20 per field goal. He also participated in the organization’s annual walk to raise awareness and funds. Last spring, a local company donated $25,000 live on Good Morning America to Down Syndrome Connection of Northwest Arkansas on Cam’s behalf due to his dedication to the organization.

Anders Carlson was a Bobby Bowden Award nominee (FCA) and is a frequent speaker to local FCA groups and rallies. He mentored high school kickers with both on and off the field topics. Other community service activities include: Team Ministries volunteer: Spreading the word and encouraging hope to families facing pediatric cancer challenges; Serve Day volunteer (2019-21) – Partnered with Church of the Highlands for serve projects in the local area (Laying sod, painting, cleaning, etc.); The More They Know (Mission Trip/2019) – Served the local communities of the Dominican Republic through food and service projects; Beauregard Tornado Relief (2019) – Severed alongside teammates to clear damage after tornado struck a local community; A2 Advancing Adolescents volunteer: After-school program assisting children in their pursuit of their activities and passions; Student-Athlete Advisory Committee team rep (2018) – Represented the voice of Auburn Football pursing excellence and equality; Church of the Highlands Parking Team Leader – lead college students to pursue the Lord deeper while facilitating the lot for weekly meetings; Dream Center event coordinator – Set up activity truck in less fortunate neighborhoods for games and a message; Kick It For Kids – pediatric cancer outreach and fundraising.

Dante Zanders has accumulated over 46 hours of community service while at UF. He has participated in numerous local elementary visits and served as a Gators Mentor for Williams Elementary.

Kearis Jackson is a 2022 Allstate AFCA Good Works Team member. Beginning when he was a student at Peach County High School and continuing to today, he has served as both a mentor to youth in the Middle Georgia area – kids in the “478” area code – and as a motivational speaker to football, basketball and track & field teams in his hometown of Fort Valley, Ga. He has served as a graduation speaker at the graduations of Byron Elementary School in Peach County and a middle school in Decatur, Ga., to motivate students as they move into the next phase of their educations. Other community service activities include: COVID Vaccine Ambassador – Served as an ambassador to demonstrate the benefits of receiving the COVID-19 vaccine and encourage eligible individuals to receive the vaccine; WiFi hotspots for Athens/Clarke County Schools – Helped lead a drive that raised approximately $100,000 for WiFi hotspots for local children since schools were conducted remotely for a majority of the 2020-21 school year; Winter Coat Drive – Assisted an effort by multiple UGA athletic teams that collected 437 new or gently used coats for local youth with the assistance of the Boys & Girls Club of Athens.

Growing up in a military family, Jalen Geiger attended six different schools from kindergarten through 12th grade and knows a thing or two about what it feels like to be the new kid in class and how hard it can be to make new friends. Because of his background, Geiger has a passion for helping people, especially elementary school-age kids. Geiger is now using his platform as a football player to help kids in need and in 2021, found a mentorship opportunity at Liberty Elementary in Lexington, Kentucky. He has visited the school on several occasions, playing with the kids and talking to them about anti-bullying, learning and trusting their teachers. In 2022, Geiger created the “Just. Inspire. Greatness.” initiative. Based on his initials, J. I. G. (Jalen Isaiah Geiger), his initiative hopes to inspire greatness in kids around the Commonwealth and his hometown community of Columbia, South Carolina. He used his own money to purchase wristbands with his mantra and he handed them out to the kids and teachers at Liberty Elementary on his last visit. He has volunteered to read to a group of first graders at Yates Elementary three times during the season.

Mike Jones is a team captain and LSU’s nominee for the Wuerffel Trophy. He graduated from Clemson in three years. His community service includes: Golden Harvest Food Bank where he provided meals and nutritional education to over 300 local families; Ravenel Elementary where he was a weekly mentor; Lebanon Blue Devils Youth Football Mentor where he mentored kids within the Lebanon Football Youth League; Participated in the McKinley Senior High School Literacy Fest.

KD Hill was the recipient of the prestigious Chucky Mullins Courage Award. He hosted a Thanksgiving meal for local community members in need and hosted a community event in fall 2022, providing food and speaking with students on perseverance, goal-making, leadership and confidence. Other community service activities include: Weekly visits to the Oxford Housing Authority and Boys and Girls Club of North Mississippi; Helped donate more than 45 cases of water to families in need in Jackson, MS in summer 2022; Spoke at FCA United event in March 2022; Visited children at Eufaula Youth Build (AL) in December 2021; Participated in the Reading with the Rebels program, the North Mississippi Adopt-A-Child Christmas program and the Thanksgiving Adopt-A-Basket program during all four of his seasons.

Austin Williams is a finalist for the Campbell Trophy (academic Heisman) and semifinalist for the Wuerffel Trophy and Witten Man of the Year Award. He is a two-time First Team CoSIDA Academic All-American in 2021 and 2022 and was chosen as the 2021-22 SEC H. Boyd McWhorter Scholar-Athlete of the Year, the highest honor an SEC athlete can earn in any sport. He is a member of the M-Club, the community service club for scholar-athletes. He is also a member of the Student-Athlete Advisory Committee, which represents and provides a voice for all student-athletes at Mississippi State University. He served on a mission trip to the Dominican Republic through Pinelake Church and visited the Batson Children’s Hospital & Palmer Home for Children to spend time with the children. Williams went to the Emerson Family School to read books and short stories to the children and served as a volunteer through Faithworks for Vacation Bible School with local elementary children.

MarShawn Lloyd has a heart for community service and has been involved in several projects, many of which are in his home state of Delaware. Locally, he has participated in the Shop With Jocks program, where he goes Christmas shopping with the kids from the Epworth Children’s Home. He has also been involved with a panel discussion regarding student-athletes and injuries, relaying his own experience of sustaining a season-ending injury and the mental and physical toll it takes to rehab and return to the playing field.

Jacob Warren is a team leader on and off the field for the Vols who was nominated for the 2022 Wuerffel Trophy. In November 2022, Warren helped spearhead a “Coats for the Cold” drive to collect thousands of coats for those in the Knoxville area in need. He has participated in numerous trips to the East Tennessee Children’s Hospital during his career. He is also heavily involved with his church, regularly volunteering his time at church events and other activities. Warren volunteered at the Boys & Girls Club through a church program and led Bible studies and engaged with kids playing sports, doing crafts. He earned his undergraduate degree in kinesiology in May 2022 and is currently pursuing a Master of Science degree in agricultural leadership, education and communication where he has maintained a 4.0 postgraduate GPA. Warren is a four-time member of the SEC Academic Honor Roll.

Layden Robinson has dedicated his time to the Brazos Valley Community on a number of occasions, including volunteering at Twin City Missions, serving meals, helping to clean up trash, wipe down walls and windows, while also helping to mop floors and clean flower beds. He has also participated in the Texas A&M Athletics Sports Day event, joining other student-athletes to volunteer with the local Boy and Girls Club and teach different sports and games to the children. Robinson helped create football activities for the children to participate in. Robinson is also in good standing in the classroom and is set to graduate in December of 2022, earning his bachelor’s degree in communications. He was named to the SEC’s first-year honor roll after maintaining above a 3.0 in his first year and has been honored by the Texas A&M academic staff.

In addition to returning to his on-field play, Bresnahan has continued to be a leader off the field. He has been one of the team leads with Turner’s Heroes, an organization founded in memory of late Vanderbilt football player Turner Cockrell. In addition to funding cancer research, the organization aims to celebrate pediatric cancer patients as the heroes they are, providing superhero capes at special events. Bresnahan has led the Commodores in connecting with patients at the Monroe Carrel Jr. Children’s Hospital at Vanderbilt, while also helping coordinate an annual Turner’s Heroes game for the Commodores where players where capes at Star Walk to raise awareness. In addition to Turner’s Heroes, Bresnahan has been the team lead for Dores Aligned, which takes Vanderbilt players to schools throughout Middle Tennessee to greet students at school drop-off, as well as an active volunteer with the Boys and Girls Club.