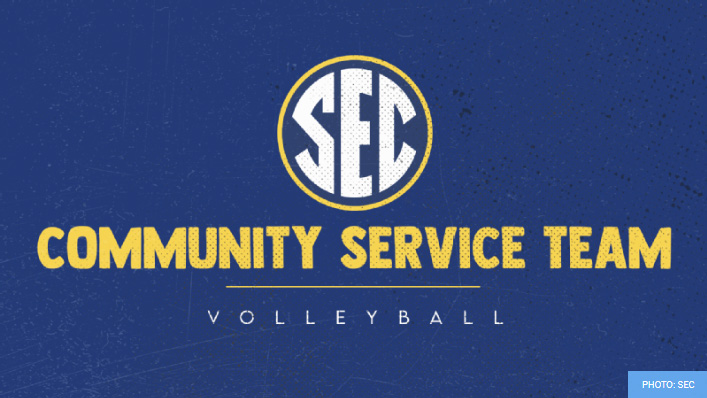 Wells has participated in a number of volunteer initiatives through the University of Alabama’s athletics department. She has participated in annual activities such as Halloween Extravaganza, Project Angel Tree and the Crimson Tide Foundation’s Thank-A-Thon. Wells organized the volleyball team’s involvement in a St. Jude charity Walk/Run and has helped with the Alberta Head Start program, reading books to preschool-aged children in the community.

Since her arrival at Arkansas in 2021 as a graduate transfer, Archibong has been heavily involved in many areas of student-athlete development. After serving as a Student Athlete Advisory Committee representative in her first year, she took on a greater leadership role as a founding member of BLAC, the Black Leadership Athletic Committee. The group, formed in 2022, aims to enhance the Black student-athlete experience through education, service, and fellowship. BLAC events provide a space for Black student-athletes to bond and connect, as well as starting conversations and engaging the entire student-athlete and university population. Recently, BLAC has hosted a “Winning Your Hair While Winning in Your Sport” workshop and Friendsgiving, both featuring community members who helped educate and speak on topics important to the Black student-athlete experience and beyond. Outside of BLAC, Archibong remains engaged with student-athlete development with activities like Trunk or Treat with UAMS and is a dedicated member of Arkansas’ Alpha Kappa Alpha chapter, all while keeping up with volleyball and her rigorous OT doctorate program.

Along with the Auburn Student Athletic Advisory Council, Barrett ventured to Birmingham to work with Habitat for Humanity. There, she and other Tigers spent more than 24 hours building a house. Over the course of this semester, Barrett has also assisted in making blankets with other SAAC members to donate to Ronald McDonald House. She has also led the charge in a separate black donation for local Children and Veterans hospitals. Barrett was also pivotal in organizing the SAAC campus food drive and has scheduled more food drives for HDFS to fight food insecurity. Accompanied by her fellow teammates, she volunteered time to teach girls the basics of Volleyball in Columbus, Georgia, has participated in multiple Car Hops, welcoming elementary school kids to calls and has taken the time to read to several different elementary schools. In total, Barrett has devoted over 75 hours of community service hours this semester alone. She was named to the 2021 SEC Fall Academic Honor Roll and the 2020-21 First-Year SEC Academic Honor Roll.

Hendrickson participated in hospital visits to sick children at Shands, and she was also a member of the Lunch Buddies program at Lake Forest Elementary. She assisted at the Blue Wave Summer Camp and helped out at four different Gators Read programs across Gainesville elementary schools. Along with that, Hendrickson helped out at the Chiles Carnival, assisting with different games and activities at Lawton M. Chiles Elementary School. She participated in both the Field Day at Noah’s Endeavor and the Night to Shine Prom, the latter of which gives those with special needs a night they won’t forget – walking down the red carpet and dancing at prom.

Powell serves the University of Georgia and Athens communities in several ways. She volunteers her time with iServe Ministries. With iServe, Powell aids in distributing groceries to families in need in Clarke County. Once a month, iServe brings an 18-wheeler full of food and the iServe team loads upwards of 300 cars for families most in need. Powell also volunteers her time with the Boys and Girls Club of Athens and Special Olympics at UGA through the annual Hometown Rivals baseball game. In 2017, she joined a mission trip to Uganda. Powell is one of the volleyball team representatives on UGA SAAC and was a 2019 inductee to the University of Georgia Leadership Education and Development (L.E.A.D.) program. She is a member of the SEC Academic Honor Roll and Dean’s List. She was a member of the 2021 SEC Volleyball Community Service Team. Powell graduated from the University of Georgia in May 2022 with her undergraduate degree in International Affairs and is now pursuing her graduate degree in Public Administration.

Berezowitz participates in God’s Pantry, where she helped pack sack lunches and deliver them to local elementary schools for distribution to underprivileged students. She has also spent time as an ambassador for My New Kentucky Home, serves as the President and Founder of the Financial Literary SubCommittee, a Student-Athlete Advisory Council (SAAC) representative for Volleyball and other UK endeavors. In her Finance major, Berezowitz serves as a member of the Finance Society, is a Wall Street Scholar and a Pelissier Scholar. Additionally, she is a camp coordinator for I Am Third and created a camp in her hometown of Burlington, Wisconsin, Train Like A Champion. A team captain for the 2022 season, Berezowitz is also an active member of FCA and a special education substitute teacher.

Bohnet is the Athletes for Hope – LSU Volleyball Community Service Representative. She contributed school supply donations for Thankful Tiger and made backpacks for foster kids filled with those supplies on the Thankful Tiger Service Day. Bohnet played a key role in painting and cleaning local and historical McKinnley High School, and assisted kids with disabilities who play baseball at The Miracle League Baseball Games. She is the elected President of the Student-Athlete Advisory Committee since 2021. Bohnet has already accepted a full-time position for Ovintiv as an engineer and will be stationed in Denver, Colo.

Schnitta helped lead a water collection drive for Jackson, Mississippi, and the surrounding area as the city faced a water crisis after storms and flooding this past September. She was able to help Ole Miss student-athletes donate over 10,000 bottles of water for those in need. Within the Oxford-Lafayette community, Schnitta has given back to children through initiatives such as Reading with the Rebels, visiting elementary classrooms to read to students and discuss her experiences as a student-athlete, Ole Miss’ annual Trunk or Treat event and Books and Bears where she helps collect books and toy donations during the Christmas holiday. She has also helped welcome students to school, participating in morning drop-off, and helped celebrate educators through the College Football Playoff’s Extra Yard for Teachers Week. Schnitta also leads the charge on Ole Miss’ annual Feed the Sip food drive, helping collect non-perishable food items to donate to elementary schools in Tunica and Quitman County. She serves as an executive board member of Ole Miss’ Student-Athlete Advisory Committee (SAAC), helping represent all athletes at the university and enhancing the student-athlete experience.

This season, Walk has served as a Partnership Middle School mentor, where she would greet the students with encouragement and walk with them from their cars to the classroom. She also gave her time to Henderson Ward Elementary School, where she would greet the kids as they arrived at school and had lunch with the students. Walk volunteered for the Salvation Army Red Kettle, where she would ring the bell to raise money for the Salvation Army during the holiday season. She represented Mississippi State volleyball at a soccer game to pass out candy to kids of the community that came dressed up to trick or treat. Walk is currently serving on Student-Athlete Advisory Committee as the volleyball team representative, where she attends summer meetings with other student-athlete leaders to vote on legislation, discuss problems in collegiate athletics and oversee and convey information to Mississippi State student-athletes. During 2021, she was named to the Fellowship of Christian Athletes Leadership Team, where she represents the volleyball team in meetings on spiritual leadership and organizes events to engage student-athletes in activities for fellowship.

During her four-year career, Mangual-Duran has surpassed 20 hours of community service. She has spent time volunteering in Columbia and her hometown, doing numerous community service projects. On the court, Mangual-Duran has spent time as a volunteer coach in her hometown of Rio Grande, Puerto Rico. She has also spent time working with the youth volunteering at local Columbia public schools where she spends time in the classrooms reading to the students.

Anadi already has 25 total hours of community outreach midway through her second year at South Carolina. She has focused most of her volunteer efforts on local schools, spending time as a pen pal and mentor at Columbia-area middle and elementary schools. Anadi also has participated in the Gamecocks Games – a field day event with special needs children – and with United Way’s reading events around Columbia. Anadi serves as the team representative on the Student-Athlete Advisory Committee and is the team coordinator for all community outreach efforts.

During her time on Rocky Top, senior Fingall has spent her time away from the court volunteering at Lonsdale Elementary, helping teach P.E. classes. In addition, she has assisted with Tennessee Athletics’ annual VOLoween night, which includes trick-or-treating around the athletic complex, face painting and playing games with children from the Knoxville community. Fingall was also a member of UT’s VOLeaders Academy, going on a service trip this past summer to Rwanda. She has been named to the SEC Academic Honor Roll for the last two years and earned a spot on the 2019-20 First-Year SEC Academic Honor Roll after her freshman year. She has also been named to the UT Dean’s List five times.

Fields has been an influential individual within the Bryan-College Station community who has tallied 88 hours of community service throughout her five years at Texas A&M. Specifically in 2022, she has been a key contributor in multiple areas, the first is being a leader in sports day for the Boys and Girls Club of Brazos County. Fields organized the children and helped them learn and play the game of volleyball, a program which came together under her leadership. She also takes elementary school students on tours of the Texas A&M campus as she educates them on traditions within the institution while talking about her story and experience. Fields was previously named to the 2021 SEC Volleyball Community Service Team.