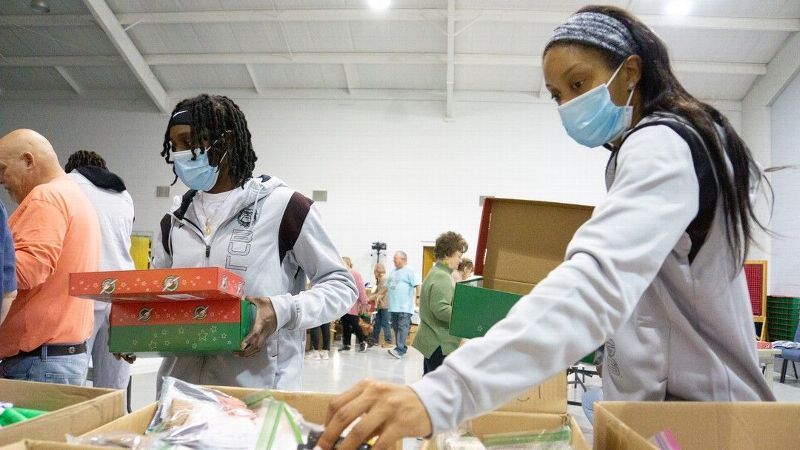 BIRMINGHAM, Ala. – In a continuing effort to recognize the accomplishments of student-athletes beyond the field of competition, the SEC once again highlighted a Community Service Team for women’s basketball for the 2021-22 season.

Megan Abrams • Alabama Graduate • Guard • Lafayette, La.
Megan Abrams co-founded a University of Alabama registered club, exclusive to Crimson Tide student-athletes, named Project I.D., which launched this February. The mission of Project I.D. is to create a safe space for student-athletes who identify with, or are allies for, minority groups, giving them the opportunity to voice their thoughts and ideas to create an inclusive student-athlete experience. Abrams and teammate, Jada Rice, have built the club from the ground up, including playing a key role in drafting the mission statement, creating a logo, marketing the organization and forming content for meetings. Abrams has also served time at the Catholic Social Services of West Alabama, Halloween Extravaganza, ReadBamaRead, Thank-A-Thon, VA Hospital, Alberta Head Start Reader and West Alabama Food Bank.

Rylee Langerman • Arkansas Sophomore • Guard • Norman, Okla.
A menace on the floor, Rylee Langerman proved to be just the opposite off of it. She spent time volunteering locally, including writing letters to Mercy Hospital staff, Miracle League athletes and First Responders. She also spent time at community engagement events at both the Potter House and with AAO. Rylee has also become quite the role model in just two years at Arkansas – she has attended youth games of Razorback fans and has been an inspiration for others that have Alopecia.

Kiyae’ White • Auburn Redshirt Senior • Forward • Macungie, Pa.
Kiyae’ White has participated in projects benefitting numerous local organizations. She has been involved with Our House, a local outreach program for children that live in public housing in Auburn, helping to clean their building, pack Halloween candy bags, yard cleanup, and delivering school supplies. She has worked with BraveHearts, a fine arts program that offers programs for youth and young adults with disabilities. She has also been involved with the Boys and Girls Club, the Auburn SAAC canned food drive, and Athletes Supporting Athletes.

Brynn Farrell • Florida Sophomore • Guard • Ortley Beach, N.J.
Brynn Farrell has found multiple ways to make a difference in her community while at Florida. The Ortley Beach, N.J., native has volunteered with St. Augustine Church to help the local homeless population by handing out supply bags. In addition to working with St. Augustine, Farrell has also volunteered at Shands Children’s Hospital, dropping off greeting cards and recording a special message for the kids at Shands.

Mikayla Coombs • Georgia Senior • Guard • Buford, Ga.
Mikayla Coombs has been actively involved in the community as a member of the Georgia Lady Bulldog basketball team. Her efforts have not gone unnoticed as she was tabbed to serve on the NCAA Competition Committee and was elected vice chair of the SEC Leadership Council. The Buford, Ga., native led in helping the Lady Bulldogs distribute needed water bottles to the Boys and Girls Club of Athens. She has been involved with Operation Christmas Child, helping pack shoe boxes for needy children. She was instrumental in Team Impact and routinely kept in touch with the team’s adopted member, Randi. Coombs also gives of her time at Stroud Elementary, where she reads to children. She has already earned her undergraduate degree in sport management and is pursuing a master’s in the same subject. She boasts a 3.82 grad GPA, has been a member of the Athletic Director’s Honor Roll every semester of her college career and has twice placed on the SEC Academic Honor Roll.

Olivia Owens • Kentucky Junior • Center • Albany, N.Y. Olivia Owens has been active in the Lexington community since arriving on campus. She has volunteered her time at the Kentucky Children’s Hospital, visiting with patients to uplift their spirits. She also has worked with God’s Pantry Food Bank, packing food bags for students and delivering them to local elementary schools. She has spent time mentoring and interacting with students at RISE Academy Elementary School and Williams Brown Elementary and spent time at the Irvine Nursing and Rehabilitation Center, Calvary Baptist Church and The Nest.

Khayla Pointer • LSU Graduate • Guard • Marietta, Ga. Khayla Pointer has volunteered her time to many organizations. She has worked with LSU’s Tiger Pals, exchanging letters with elementary school children each week to help improve their reading and writing skills. As well as visiting Our Lady of the Lake Children’s Hospital, Live Well Ascension, YMCA of Baton Rouge and Southside Gardens Retirement Community. She participated in activities at the Greater Baton Rouge Food Bank and LSU’s Halloween Boozar. She’s also engaged in different educational activities with children at the Knock Knock Children’s Museum.

Mimi Reid • Ole Miss Redshirt Senior • Guard • Bronx, N.Y.
Mimi Reid assisted with the collection of items for the Feed the Sip Food Drive, donating nonperishable food items to elementary schools in Tunica and Quitman County. She helped assemble baskets for families throughout the Oxford community through the Adopt A Basket program, donating over 70 boxes to local families. Reid spent time at local elementary schools in Oxford at the morning carpool greet. She also worked to gather school supplies prior to the school year for the Boys and Girls Club. The redshirt senior spent time at the Boys and Girls Club of Oxford to present supplies and gathered baby supplies for new mothers for a local pregnancy center in Oxford.

Charlotte Kohl • Mississippi State Sophomore • Forward/Center • Giessen, Germany
Charlotte Kohl has participated in Camp with a Mission, helping students with disabilities learn basketball; Starkville Get Swept UP, where all of Starkville was involved in cleaning up Starkville before the first football game. We move next to Moving You Into MSU, where our athletes helped the freshmen students move back to campus at the beginning of the semester; Voll-O-Ween – Happy Halloween to all the little ones as they came out to enjoy a game of volleyball and trick-or-treat; Next we walked for all who had/have Cancer in our annual Pink Dawg Walk for Cancer; Bag ‘Em up Bulldog, was a collection of bags to help the homeless; and then Charlotte became a Pen Pal for students at the elementary school this year. Charlotte also participated in the Salvation Army Red Kettle Campaign this year.

Haley Troup • Missouri Redshirt Senior • Guard • Gadsden, Ala.
Haley Troup has participated in a variety of community service activities since joining the Mizzou program. Troup has spent extensive time helping with Tiger Paw Day, Mizzou Women’s Basketball’s program that allows the players to interact with children through various activities and as “pen pals.” She has also spent time serving with the Coyote Hill Children’s Home, the Boys and Girls Club, Salvation Army and the Special Olympics. She and her teammates served at a local housing authority by painting and deep cleaning the facility, organizing its storage areas, and repairing various items before returning to read and spend time with the children. Troup was a part of the Tigers’ Hoops for a Cause event, partnering with the local Boys and Girls Club.

Laeticia Amihere • South Carolina Junior • Forward • Mississauga, Ontario, Canada
Laeticia Amihere has taken on leadership roles in several service projects this season. In addition to volunteering at Transitions homeless shelter, she organized a Fall Basket Drive for student-athletes and Athletics Department staff to donate non-perishable food items, toiletries and other new or gently used fall essentials for the homeless community. She worked with Prisma Health Children’s Hospital to organize a Teddy Bear Toss at a women’s basketball game this season; and also distributed bears from the event to local schools and other organizations. Laeticia coordinated gathering and distributing Black History Month facts videos throughout February at men’s and women’s basketball games and on social media. She took part in the Athletic Department’s MLK Day of Service event, delivering meals to the homeless in downtown Columbia and organized events for a local women’s shelter in honor of Women’s History Month in March.

Tamari Key • Tennessee Junior • Center • Cary, N.C.
Tamari Key trained and traveled as part of the VOLeaders Academy summer immersion experience to Belize in 2021. She participated in community engagement around Belize City and spent three days working with the Hearts of Christ Children’s Ministries in the village of Roaring Creek. While there, she took part in a day painting multiple school buildings and enjoyed two other days playing sports festival games with children at the facility and volunteering with the YMCA of Belize. She also participated in the Adopt-A-Family program, joining with team members to purchase and deliver gifts at Christmas, volunteered at the Race for the Summitt 4-Miler in September, and shared her time sorting produce and serving neighbors in Knoxville at the FISH Food Pantry. Other activities Tamari has taken part in include reading to children virtually with the Boys & Girls Club and as part of the Knox County School “Read to Lead” program, making sandwiches for lunches with the Salvation Army, and writing cards to those served by Knox Area Rescue Mission (KARM). She also has spent time assisting with the SAAC’s annual Voloween and Community Holiday Meal initiatives.

Sahara Jones • Texas A&M Sophomore • Guard/Forward • San Antonio, Texas
Sahara Jones participated in AggiesCan this fall, which is the largest student-athlete volunteer run canned food drive in the nation. AggiesCan helps in collecting non-perishable food and monetary donations to benefit the Brazos Valley Food Bank and the 12th Can. Jones was a Peer Mentor in A&M’s CSTAT Program (College Summer Transition and Acclimation Training) which helps new student-athletes transition to Texas A&M. Currently, she is the Chief Marketing Officer for the B.L.U.E.print. The organization stands for Black Leaders who Undertake Excellence – and is a student-athlete led organization that provides leadership opportunities and a sense of community while empowering Black individuals to use their voice.

Bella LaChance • Vanderbilt Sophomore • Guard • Davie, Fla.
Bella LaChance has assisted in many nonprofit organizations, some of which are Team Impact, Dancing Dores, and HopeKids. These organizations support and include children with life-threatening or chronic illnesses with the hopes of building lifelong bonds and life changing experiences. Bella has formed relationships with individuals in each of these organizations and has gone above and beyond in connecting and serving the community. She has also been consistently involved with the Special Olympics through Vanderbilt University service days by playing soccer, assisting stretches and cheering on the athletes participating in the events. She has also spent time at Harvest Hands Food Shelter preparing and handing out meals for some of the homeless communities in the area. Throughout the season Bella has also helped collect toiletries from each of our hotels to make snack and hygiene bags to donate to Nashville Rescue Mission for the homeless in the Middle Tennessee area. Her hopes are to join SAAC and continue serving her community in as many ways as she can.