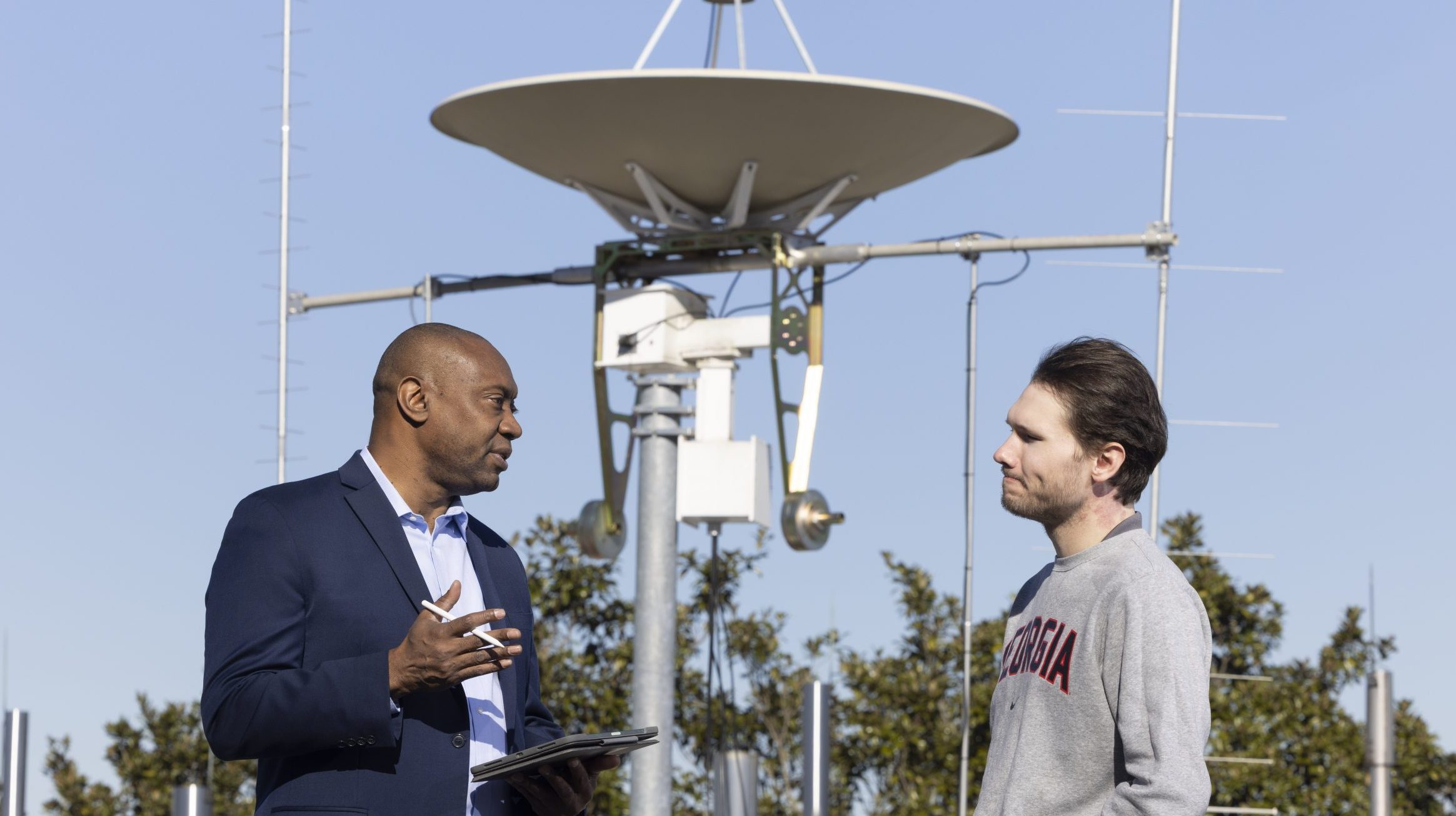 Dr. Marshall Shepherd knows when he walks into a room, he might be the only person of color and the youngest person there. He knows some people assume he is in the wrong place. But Dr. Shepherd is in the right place, and he is redefining how those rooms look and feel for the next generation of scientists.

It’s not always intentional with Dr. Shepherd, the University of Georgia Athletic Association Distinguished Professor of Geography and Atmospheric Sciences. His very presence dismantles stereotypes associated with faculty in general and African American faculty in STEM disciplines in particular. Consider, Dr. Shepherd loves sports and listens to music from a range of artists from the Atlanta area, where he was raised. Second, he believes research should be translated for everyday use and accessible to all, both in who is presenting the science and who is consuming it; and he teaches that way as Director of Georgia’s Atmospheric Sciences Program.

“I enjoy conveying knowledge, and I have a style that reaches people where they are, even with a complex subject like atmospheric sciences,” Dr. Shepherd said. “I pride myself on being able to make things accessible and relevant. I enjoy seeing the light bulbs go off, and now I am a proud ‘academic father.’ You see your students working for the federal government at NASA or with the national weather service or as a broadcast meteorologist, and you know you are having an impact on the next generation.”

Dr. Shepherd has been “academically parenting” at Georgia for 16 years, but none was more gratifying than 2021. In a string of firsts, he was elected to the National Academy of Sciences, National Academy of Engineering, and the American Academy of Arts and Sciences, all within the span of a few months. He became the first person at the university to be elected to all three distinguished associations and certainly the first to do it in the same year. Election to an academy is the highest professional honor a faculty member can receive. It is an incredibly selective (and secretive) process in which existing members nominate and vote on new members. In other words, it is an award from your peers.

“The vast majority of scholars will never be elected to one, and to learn that I was elected to the top three is humbling,” Dr. Shepherd said. “The first was the National Academy of Engineering, and I thought it was a joke, so much so that I emailed the Academy and asked if it was spam because I am not an engineer. A few months later I found out about the National Academy of Sciences, and that felt more natural since I am a scientist, but I was still stunned. It means a lot to me because my mission is being acknowledged.”

Dr. Shepherd is intentional about making his research available broadly and engaging beyond the academy, once viewed as less-than-serious scholarly activities. He does TED talks, and they have been viewed nearly three million times. He hosts “Weather Geeks” on The Weather Channel, which has won awards, and he regularly speaks to non-academic media outlets like Forbes magazine and the Today Show, all in an effort to bring atmospheric sciences to the masses.

“Dr. Shepherd is a celebrated teacher and scholar who has shaped a generation of atmospheric scientists, and his professional leadership and public engagement – in Georgia and nationally – are unrivaled,” said Jere W. Morehead, President of the University of Georgia. “He is deeply committed to fostering diversity in climate-related fields, as evidenced by his personal recruitment and mentoring of African American students in his department. Dr. Shepherd combines extraordinary instruction with pioneering scholarship and an unwavering commitment to applying his expertise for the benefit of communities across the nation and beyond.”

There are few things that could rival Dr. Shepherd’s “Big Three” national academy elections, but he admits one is receiving the SEC Professor of the Year Award, which is given annually to one SEC faculty member whose record of teaching and research places him or her among the elite in higher education.

“It is the Big Four now because this SEC professorship is right up there with those honors,” Dr. Shepherd said. “People understand what it means to win the SEC Professor of the Year Award. Outside of higher education and some aspects of government, no one really knows what the national academies are. Everyone knows what the SEC Professor of the Year is without explanation, and to be recognized by an organization that has so many people who qualify for the honor is humbling.”

There is little else Dr. Shepherd can earn or add to his crowded trophy case, but he has years of career left, and he has a plan for that time. He says, “There weren’t scientists who looked like me when I was coming through the ranks, but my children can see me and my friends now. We are accessible to them, and the mentorship that we provide might be a motivator for a young person to go into the field, and that is what I want to see.”