Academic Excellence is Part of the Culture for Gamecock Cross Country 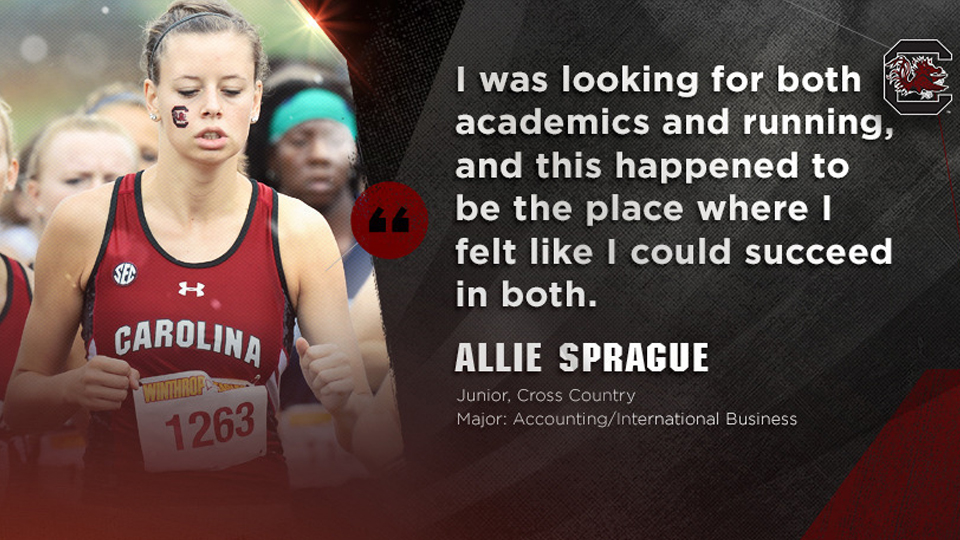 The South Carolina cross country team has a reputation of putting up some impressive numbers, and not just on a 5K or 6K course of grass, hills and sand. The Gamecocks have ranked among the nation’s best in the classroom over the last several years, and with 11 cross country student-athletes members of South Carolina’s prestigious Honors College, which has been ranked No. 1 in the country since 2012, there is no slowing them down in that regard either.

“When I first started applying to colleges, academics was my first priority, and it still is,” said redshirt junior captain Martha McCoy, who is a biology major. “So when I got into the Honors College, South Carolina became more of a top choice for me.”

“I was looking for both academics and running, and this happened to be the place where I felt like I could succeed in both,” said junior Allie Sprague, who is studying accounting.

“I had heard so many good things about the Honors College since it’s always one of the top ranked in the country,” said sophomore Allison Mueller, who is studying pharmacy. “Academics are definitely important because when I’m done with running, I want to get a good job and be well prepared for life after college. I definitely have the opportunity to have a quality academic and athletics experience here. I don’t have to choose one over the other.”

Last year, the South Carolina cross country team earned the second-highest grade point average across the three NCAA divisions and earned All-Academic team honors from the U.S. Track & Field and Cross Country Coaches Association. It marked the fourth-straight season the team has ranked in the top 10 among cross country programs nationally in combined GPA, and the Gamecocks were only .004 percentage points from being just the third program in the award’s history to own the top GPA in the nation in back-to-back years after taking top honors the previous year.

“We had a team grade point average of 3.79 two years ago and went up to a 3.82, but went down from first to second place,” said cross country head coach Andrew Allden. “As far as our Honors College being No. 1 in the nation, that’s something I mention in recruiting every chance I get. I tell people that it is smaller classes taught by some of the best professors at the university.”

“Our students are just like other students in one sense,” said Steve Lynn, Dean of the Honors College. “What separates them is that they take 45 credit hours of honors courses, and we offer over 500 honors courses with an average class size of 14 to 17. These are taught by research active faculty. Our students are in classes where they are more engaged and more interactive.”

“Honors students obviously have very good test scores, but they are interviewed for outside activities, motivation and their leadership potential,” said chemistry professor Scott Goode. “All of these student-athletes have demonstrated great academic skills and great leadership potential. That distinguishes them.”
The Gamecock runners in the Honors College note that the class size is a huge draw, and the relationships they have with the faculty also make a difference.

“The smaller classes really let you get to know your professors better,” Mueller said. “It’s also easier to get to know the other people in your classes so you can work together. You have more opportunities for class participation.”

Up and down the roster, the Gamecocks are also taking on some of the most challenging majors, including chemical engineering, accounting, international business, biochemistry and molecular biology.

“These are students who like to be challenged,” Lynn said. “Our students do a lot of research, too, even as freshmen and sophomores. They are involved in the kinds of things you might expect graduate students to be doing.”

“The student-athletes that I teach take their classes seriously, and they take their sports seriously,” Goode said. “In addition to that, they are completely well-rounded individuals. They are amazing to me. I couldn’t spare four hours a day (with sports) and pass my courses when I was in college. They’re spending that amount of time and excelling in some of the most challenging courses we have at the university.”

“We’re surrounded by all of these successful people on our team, so when you surround yourself with successful people, it helps you,” Sprague said. “When we’re traveling and missing some class, we go to the lobby of the hotel we’re staying in and study together. I think we are more student-athletes, with emphasis on the ‘student.’ ”

While the runners are indeed focused on improving their times on the cross country course as well as for their distance events with track and field in the spring, the student-athletes are also focused on their long-term goals for life after running.

“We all realize that it’s hard to make a living out of running,” Sprague said. “That’s why we’re all in difficult majors because we want to be able to go somewhere in life when we’re done running. My time management skills have definitely improved. That’s something a lot of employers look for. We have to utilize the time that we do have to do homework and study for exams.”

“I think we’re all individually motivated,” McCoy said. “I think that’s what makes us good distance runners, and that translates into schoolwork. When you have less time, it becomes more precious. There’s a learning curve when you first get here, but we seem to figure it out pretty quickly.”

Having such academically talented student-athletes can relieve some worries of coaches as far as academic casualties.

“Individuals who work hard in school are very disciplined and regimented,” Allden said. “That discipline can certainly translate into a very disciplined lifestyle. We’ve established a standard where we’re generally in the top ten nationally academically, and we want to keep that up. It’s certainly a matter of team pride.

“A lot of what I deal with is depressurizing people as opposed to pressurizing them. They put enough pressure on themselves with a lot of the classes and labs they take each semester. With some of them, I joke around and tell them that maybe a double-major is just fine instead of a triple major. I’ve got kids with a 4.0 who are worried about getting into medical school.”

Allden admits he sometimes has the unique problem of having student-athletes not finishing their athletics eligibility, not because of a professional career in sports, but because they are able to finish their coursework ahead of schedule.

“One of the biggest challenges I face is that a lot of our best runners have graduated in three or three-and-a-half years,” Allden said. “The only way I can get that last year of eligibility out of them is if they go to graduate school. The good news is they’re all graduating. The bad news, for me, is that they’re graduating at an accelerated rate. I’m in a sport where maturity matters, and I’m not going to have many fifth-year seniors, but they are students first.”