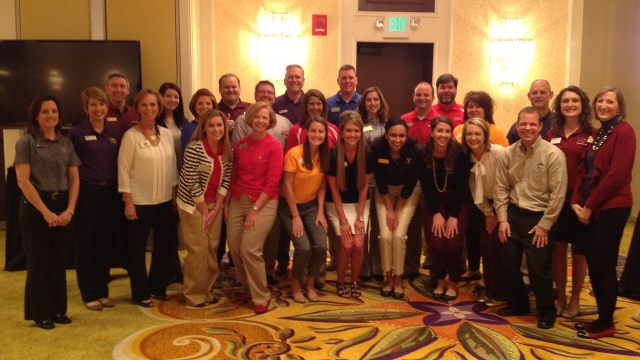 BIRMINGHAM, Ala. – When the Southeastern Conference (SEC) announced the creation of the SEC Network, ESPN President John Skipper said ESPN believes the SEC has national appeal. Of course Skipper was considering the league’s broad and extensive sports fan base, but the same could be said for its academic vision. Just like intercollegiate athletics, academic recruiting is increasingly national in the Southeastern Conference.

Since 2009, the admissions offices from each SEC institution have used an SEC College Tour to introduce the country’s best and brightest high school students to the SEC university academic experience. And with the recent reorganization of the SECU academic initiative, the SEC is more involved in this unique effort.

“The purpose of the SEC College Tour is to get the word out about the schools in the Southeastern Conference because people know us athletically, but we have really phenomenal academic programs,” said Stephen Barnett, Associate Director of Admissions at the University of Kentucky. “It is a chance for us to showcase our universities to areas that may not be as familiar with what we offer academically.”

The SEC College Tour is held each spring and is centered around admissions administrators from each SEC university traveling together to a geographic area outside of the SEC’s 11-state footprint to host college fairs for high school students and breakfasts for high school counselors in that region.

The 2013 tour traveled to Parsippany, N.J., Stamford, Conn., and Hauppauge, N.Y. The event debuted in Columbus, Ohio, and Chicago in 2009. Other past destinations included the Washington, D.C., area, south Texas and the Pacific Northwest.

In 2014 the SEC College Tour is scheduled to take place in southern California.

“When we visit areas of the country where they are not necessarily familiar with the schools of the SEC, when we come in mass, we show a big picture,” said Cindy Singley, Director of University Recruitment at Auburn University. “We don’t have to spend as much time identifying our region because our region is self-defined by the Southeastern Conference.”

An evening college fair is arranged at each tour site, and it allows high school students to interact with SEC admissions professionals in one place. Several student attendees said they had heard of some of the SEC schools before coming to the college fair, but they came out to get more information and being able to do so in the fair format was more efficient and less expensive than visiting the SEC campuses individually.

In addition to the fair, each tour stop also includes a breakfast for causal interaction between SEC administrators and local high school counselors. The goal of each breakfast is to inform counselors about SEC universities and prepare them to answer questions from students regarding SEC schools.

“The counselor breakfast is important because these are the people who influence where students go,” said David Kurpius, Associate Vice Chancellor for Enrollment Management at Louisiana State University. “If we arm them with information about SEC schools academically, they can talk about how students can be academically successful there, including enjoying the big spirit all our schools bring.”

One high school counselor said the SEC College Tour allows them to learn about the academics of each institution from experts.

After five years, the SEC College Tour’s success is best measured by the growing number of people across the country who now have a greater awareness and understanding of the academic mission of SEC institutions.

“When we talk to students or we talk to a counselor and it’s all focused on helping students be successful in what they’re dreaming of becoming,” Kurpius said. “As long as we’re building student success and providing opportunities, it’s great. The tour provides a platform to share opportunities for success with students.”