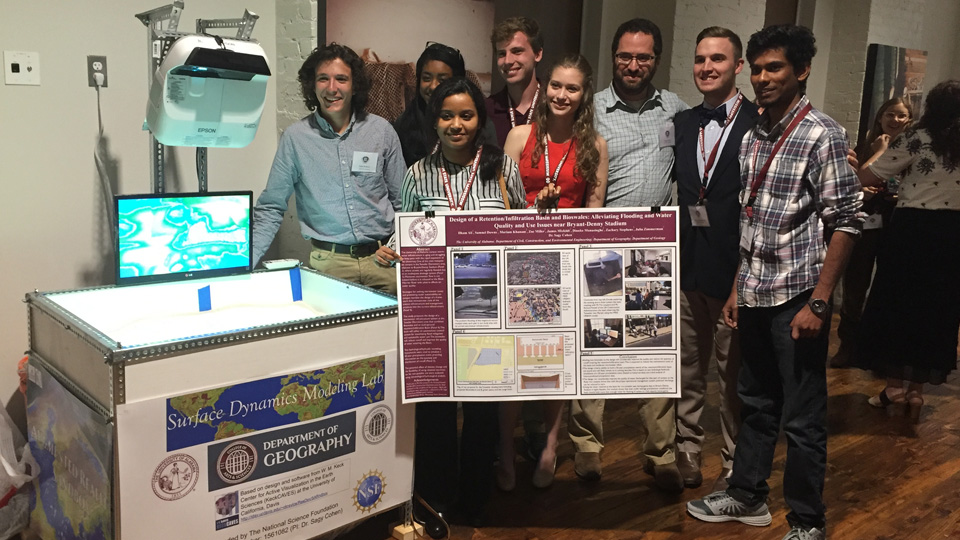 Members of the University of Alabama team pose with their project during Monday night's reception.

STARKVILLE, Miss. – The University of Alabama won first place in the Campus Water Matters Challenge at the 2017 SEC Academic Conference, the SEC announced on Monday. The winning team was comprised of the following students: Ilham Ali, Samuel Downs, Mariam Khanam, Zoe Miller, James Misfeldt, Dinuke Munasinghe, Zachary Stephens and Julia Zimmerman. The title of the team’s project was Design of a Retention/Infiltration Basin and Bioswales: Alleviating Flooding and Water Quality and Use Issues Near Bryant-Denny Stadium, and Sagy Cohen served as their faculty advisor.

The goal of the competition was to engage students at SEC universities in designing sustainable water resource solutions on their respective campuses. The challenge was modeled after the Environmental Protection Agency’s Campus Rain Works Challenge.

Auburn University finished second in the competition, followed by the University of Florida.

The competition was part of the two-day SEC Academic Conference hosted by Mississippi State. The event, entitled “The Future of Water: Regional Collaboration on Shared Climate, Coastlines, and Watersheds,” concludes tomorrow afternoon.

The SEC Academic Conference showcases SEC faculty and student research in an area of significant scholarly interest to a range of academic, legislative and other stakeholders. It is one of the ways the SEC promotes and advances the collaborative academic endeavors and achievements of its students, faculty and administrators.

A list of the top three teams, its members and project titles is below.