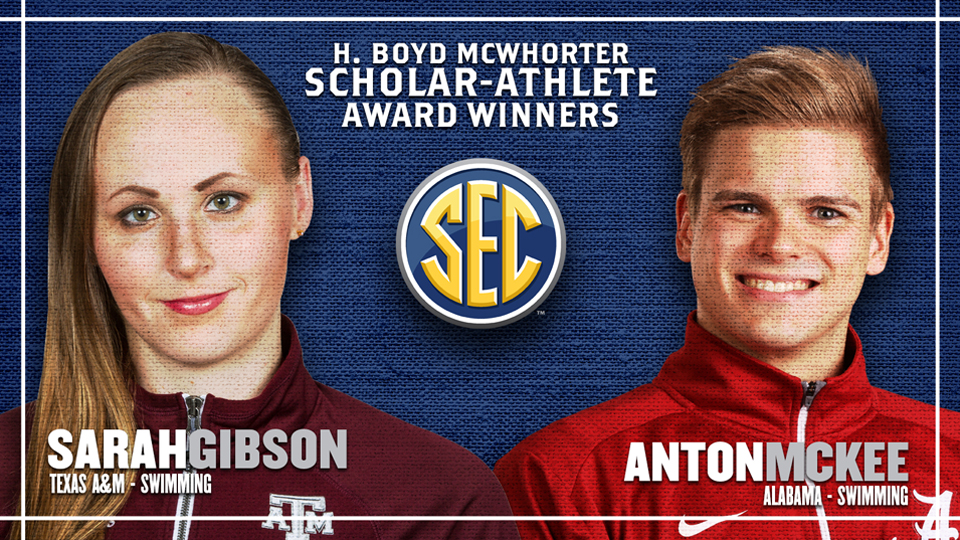 The two were chosen by a committee of Faculty Athletics Representatives from SEC universities and each will receive a $15,000 post-graduate scholarship, provided by AT&T, an SEC Corporate Sponsor.  McKee and Gibson will be honored at the annual SEC Awards Dinner during the SEC Spring Meetings in Sandestin, Fla., in early June.

“Anton and Sarah are amazing young people who are an inspiration for their commitment to the complete student-athlete experience of success in competition and excellence in the classroom,” Sankey said.  “Each of them are All-Americans in the pool and 4.0 students in the classroom, making them the ideal recipients of the H. Boyd McWhorter Award, the highest individual honor a student-athlete can achieve in the Southeastern Conference.  Anton and Sarah personify the highest of standards in the SEC for their combination of academics and athletics and I congratulate them and the institutions they proudly represent.”

An 11-time All-American for the Crimson Tide, he was the 2017 SEC champion in the 200 breaststroke and the NCAA runner-up in the same event.  He helped lead Alabama to three consecutive NCAA top-10 finishes, marking the first time Alabama has posted a trio of top-10 finishes in a row since 1981-83.

McKee set the SEC record on the way to winning the 2014 SEC 200 breaststroke title and is the Alabama record holder in the 100 and 200 breaststroke as well as the 200 individual medley and as part of the 400 medley relay.

Gibson, a Biomedical Engineering major who will graduate in May with a perfect 4.0 GPA as a President’s Endowed Scholar at Texas A&M, is a three-time College Swimming Coaches Association of America Scholar-Athlete, four-time member of the SEC Academic Honor Roll, a first-team Academic All-American, a seven-time SEC Champion and 15-time All-American.

Named the 2017 SEC Co-Scholar-Athlete of the Year in women’s swimming and diving, she won the Swimmer of the Meet Award and the SEC Commissioner’s Trophy as the high point scorer at the 2017 SEC Championships, taking individual titles in the 100 and 200 butterfly and 500 freestyle.

In international competition, she earned three medals at the 2016 FINA Short Course World Championships in fall of 2016, including golds with Team USA’s 200 and 400 medley relays.

McKee and Gibson were selected from a pool of candidates made up of nominees from each of the SEC’s 14 institutions.  The 26 remaining male and female finalists for the award will receive a $7,500 post-graduate scholarship.