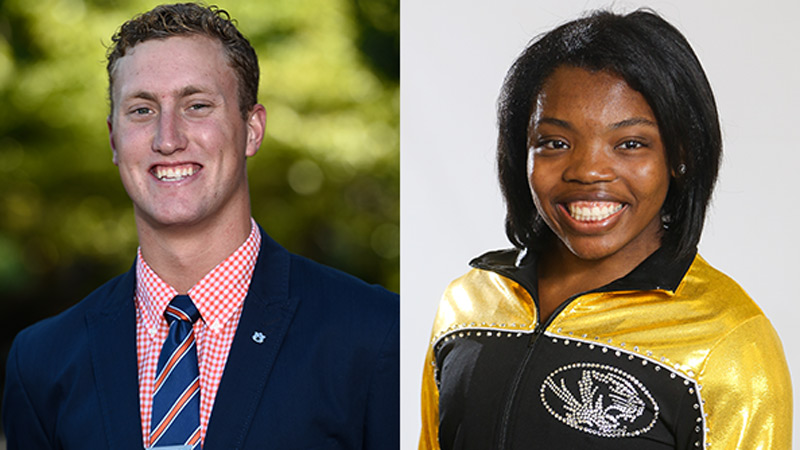 Schenk and Harris were selected as exceptional student-athletes who have shown outstanding leadership among their peers, institutions and communities

Auburn University swimmer Grant Schenk and University of Missouri gymnast Kennedi Harris have been selected to represent the Southeastern Conference at the NCAA Student-Athlete Leadership Forum Nov. 10-13 in Baltimore, Md.

Schenk and Harris were selected as exceptional student-athletes who have shown outstanding leadership among their peers, institutions and communities.

The NCAA Student-Athlete Leadership Forum was created in 1997 and has hosted approximately 5,000 student-athletes since its inception. Student-athletes who attend the forum are taught leadership skills and given the chance to explore the relationship between personal values, core beliefs and behavioral styles. The forum also aims to give attendees a thorough understanding of the NCAA as a whole, the different divisional perspectives and the valuable role of Student-Athlete Advisory Committees.

“We received several applications from very talented and bright student-athletes who represent their institutions and the conference very well,” said Misty Brown, the SEC’s Director of Student-Athlete Engagement. “Since we could not pick them all,  we selected two individuals who have proven to be exceptional students, athletes and have shown outstanding leadership among their peers, institutions and in the community.”

A junior from San Diego, Calif., Schenk serves as vice president of Auburn’s Student-Athlete Advisory Committee. He is an international business major and a two-time member of the SEC Academic Honor Roll. Schenk recorded the fifth-fastest 1650 freestyle in program history, and he also competed in the Olympic Trials in the 400 free and 1500 free.

“I was honored to even be nominated for such a prestigious event as the NCAA Leadership Forum, let alone selected out of all the worthy candidates in the SEC,” Schenk said. “I am so looking forward to attending the event in November in Baltimore and enhancing my leadership skills and experience. I am excited to learn many new things and meet some amazing people.”

A native of Atlanta, Ga., Harris is a member of the Missouri Student-Athlete Advisory Committee and the SAAC Student Engagement Committee. In addition, she is a University of Missouri Diversity Scholar and the psychology major was a scholastic All-America honoree in 2015 and 2016. She placed second on floor exercise at the 2016 NCAA Minneapolis Regional.

Said Harris: “I am very honored and humbled by my selection to represent the Southeastern Conference at the upcoming 2016-17 NCAA Student-Athlete Leadership Forum. I look forward to this incredible leadership opportunity to learn and grow alongside other student-athletes, coaches, faculty and administrators in this amazing organization.”

Each NCAA Division I and Division II conference office selects student-athletes from among their respective institutions to represent their conference at the NCAA Leadership Forum.