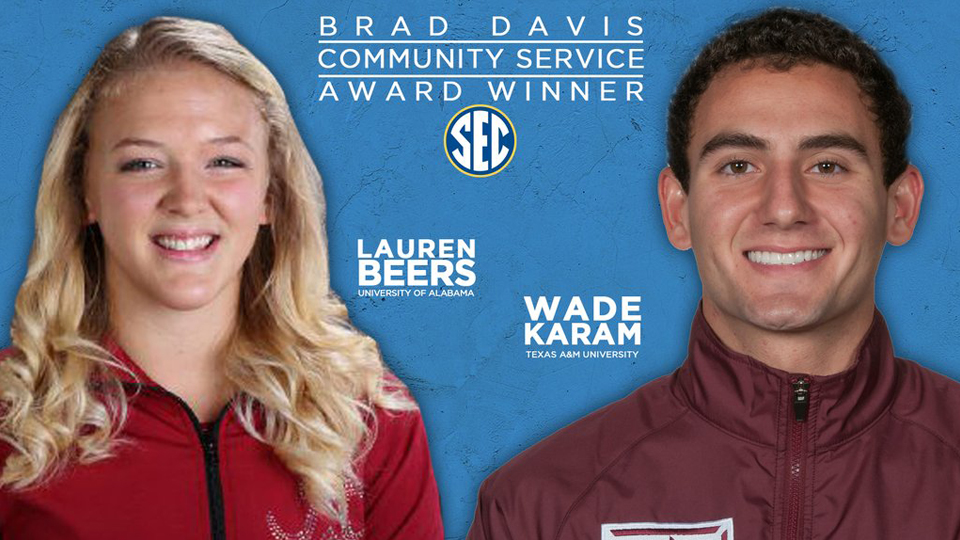 Beers and Karam were chosen by a committee of Faculty Athletics Representatives from SEC universities. Each will receive a $10,000 post-graduate scholarship, provided by the SEC.

“SEC student-athletes are as active in their communities as they are accomplished in athletic competition and academic endeavors,” said Sankey.  “Lauren Beers and Wade Karam epitomize the commitment to a well-rounded college experience and they truly represent all that can be achieved by student-athletes in the Southeastern Conference.  I congratulate them and the universities they represent on this prestigious recognition.”

The SEC Community Service Post-Graduate Scholarship is named for former Associate Commissioner Brad Davis.  Davis succumbed to cancer on March 2, 2006.  He had been a member of the SEC staff since 1988, first serving as an assistant commissioner until 1994 when he was promoted to associate commissioner.

In addition, the recipients for the Brad Davis SEC Community Service Award from the other Conference schools will receive a $5,000 scholarship, provided by the SEC.

• RISE Center Volunteer – hosted children in gymnastics facility to allow them to play on equipment
• Project Angel Tree – gymnastics team point of contact for purchasing gifts and a night of snacks and games
• Druid City Regional Hospital Cancer Center – spent time with cancer patients while they received treatment
• ReadBAMARead – promoted childhood literacy by engaging students at reading events
• Shut Out Human Trafficking Campaign – participated in video campaign to bring awareness to this issue
• Northport Funeral Service Day – interacted with children and their parents for the afternoon
• The Color Run 5K – participated in setup, assisted during the event and helped with tear down
• Verner Elementary Reader – volunteered for afternoon of reading and spending time with kids
• Habitat for Humanity – helped build homes for less fortunate individuals
• Soup Kitchen – served food, engaged in conversations with the homeless and helped clean facility
• Sprayberry Elementary – read to children and provided encouraging message about reading and growing minds
• “Suds for Sully” – washed cars to raise money for medical bills for a child with physical disorders

The SEC Community Service Post-Graduate Scholarship was first presented in 1996. Past Leaders of the Year include: