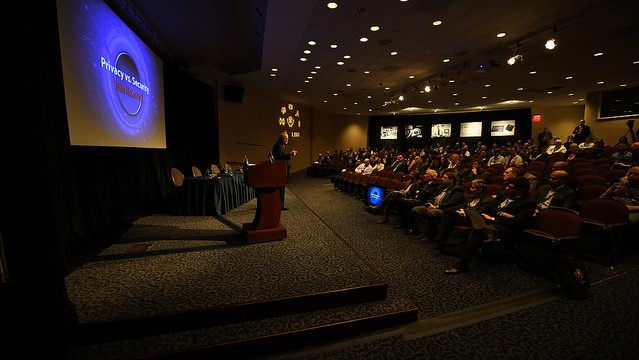 McConnell was among the keynote speakers at the 2018 SEC Academic Conference hosted by Auburn University. The conference, which is ongoing through Tuesday, is focused on the topic of “Cyber Security: A Shared Responsibility” and brings together representatives from the SEC’s 14 member universities along with industry experts in the area of cyber security.

McConnell is encouraging the use of ubiquitous encryption as a solution for stronger data protection.

“As we go to the cloud…ubiquitous encryption of some sort would be used so that if anybody accessed that data, you can’t read it. If you’re moving [the data] from point A to point B, it scrambles so you can’t read it,” he said.

McConnell understands that stronger data security can come at a cost for others, including law enforcement who may need to access data within a device during a criminal investigation.

“What I’m arguing is the greater need for the country is a higher level of [data] security. If that’s the greater need, then some things of lesser need have to be sacrificed. So when I say ubiquitous encryption, that’s what I’m attempting to describe. It is protecting the data that is the very lifeblood of the country,” McConnell said.

McConnell also addressed how academia can help in securing the nation from cyber attacks.

He urged universities to move more quickly on coming to a consensus so they can get certified and accredited to start producing students who can fill those jobs.

Glenn Gaffney, executive vice president at In-Q-Tel, also spoke to the role higher education institutions can play in cyber security during his keynote address at the conference.

“It is at the university level where we don’t have to take a top-down approach,” Gaffney said, adding that universities can work together, through research and student involvement, to create proactive solutions to cyber security. “This is where the next generation of leaders will be developed. It’s here that these dialogues must begin. This is the opportunity.”

Ray Rothrock, CEO and chairman of RedSeal Inc., was the day’s third speaker, presenting on the topic of “Infrastructure: IoT, Enterprise, Cyber Physical.” Rothrock also held a signing for his new book, “Digital Resilience: Is Your Company Ready for the Next Cyber Threat?”

Attendees at the conference are exploring computer and communication technology; the economic and physical systems that are controlled by technology; and the policies and laws that govern and protect information stored, transmitted and processed with technology.

Students at each SEC member university participated in a Cyber Challenge and presented posters displaying their work in the area of cyber security.

The conference continues Tuesday, April 10, with speeches by Mike Fey, president and chief operating officer of Symantec; Andrew Case, director of research at Volexity; and Bill Newhouse, deputy director of the National Initiative for Cybersecurity Education and security engineer at the National Cybersecurity Center of Excellence. More information on the speakers and the topics they will cover is available online at http://ocm.auburn.edu/sec/.