‘Dores Planning for the Future 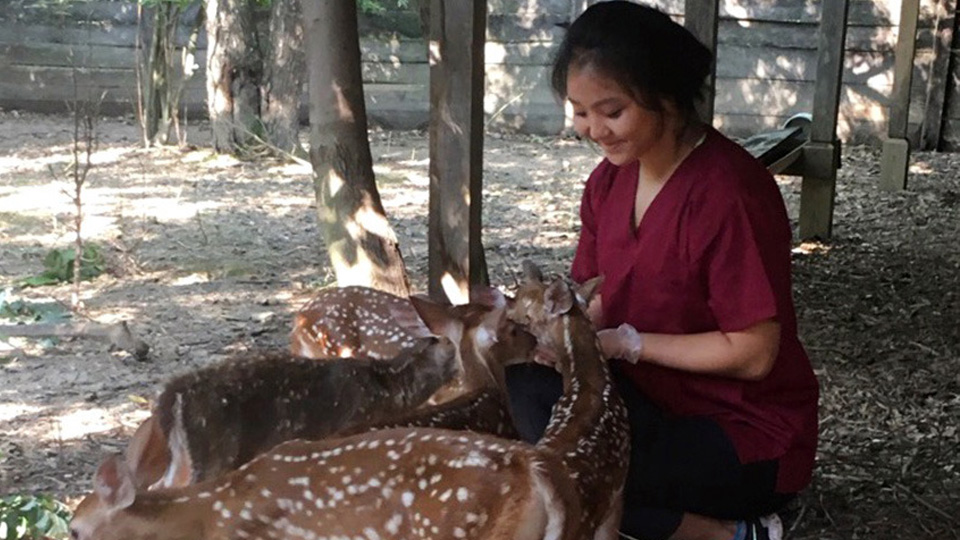 Adam Butler prefers not to think about it: the garbage, the litter, the bevy of forgotten items that often lay strewn along the side of the road. Trash doesn’t just disappear, he says, and yet the Vanderbilt senior is rarely surprised at the general public’s apathy towards the great outdoors.

Butler, a defensive tackle on Vanderbilt’s football team, wants to one day shake up that status quo. As a freshman he took a course taught by Dr. Lily Claiborne called “Volcanoes: Impacts on Earth & Society”, which cultivated Butler’s newfound passion for the environment. Butler went on to create his own major — environmental communications – with the help of the university’s interdisciplinary major program, and this summer he held an internship with the Tennessee Environmental Council in Nashville.

At the TEC, Butler – all 6-foot-5, 295 pounds of him – participated in a creek restoration project in Maury County, Tenn., linking with the local Boys and Girls Club to study and clean a nearby creek. The group would then present the project to students and teach the importance of maintaining the environment. Butler was tasked with filming the entire process, and by the end of his internship he had produced two videos depicting a pair of restoration projects.

Butler hopes that experience will one day land him a job with a similar nonprofit, a chance to follow his passion of studying and impacting the environment. It’s experience he knows will pay off once his football career ends. “This is one of the reasons why I came to Vanderbilt,” Butler said. “In all likelihood, your sport is going to end one day. You can’t do this forever. I was really sold on that idea, and Vanderbilt has really upheld that standard.”

The program has its origin under David Williams, Vanderbilt’s Vice Chancellor for University Affairs and Director of Athletics, who encountered a common issue when speaking to graduating student-athletes.

“Student-athletes would come to me and say, ‘I have this great degree from Vanderbilt, but I don’t have any work experience,’” Williams said. “So we thought, how can we go about getting kids — who are already graduating from this great university – work experience and internships on their résumé?”

Two summers ago, Vanderbilt football and head coach Derek Mason instituted a pilot program that placed student-athletes in paid summer internships. But it turned out those students couldn’t afford housing and meals with money from their internships alone. That became a problem, since Vanderbilt wasn’t allowed to provide room and board for student-athletes unless they enroll in summer school, under NCAA rules. The NCAA normally considered that an extra benefit.

In the spring of 2015, Vanderbilt’s administration decided to change that. Williams and deputy athletics director Candice Lee applied for a waiver from the NCAA, requesting to provide housing and meals to student-athletes who stay on campus and take part in summer internships. Vanderbilt submitted its request in March 2015, and by the start of summer sessions the NCAA had given the university the go-ahead. “Once they understood our objectives and the scope of our program, it was easy for the NCAA to support it,” said Lee, a former basketball player at Vanderbilt. “They ultimately said, how can we not allow schools to do this?”

Last summer 62 student-athletes across nine sports participated in internships. In 2016 that number jumped to 69, including Kate Sborov, a senior on the women’s golf team who interned at the Monroe Carell Jr. Children’s Hospital at Vanderbilt. A medicine, health and society major on a pre-med path, Sborov participated in clinical research within the neurology department at Children’s Hospital. She sifted through patient records to find trends and irregularities in surgeries, which would later add to the hospital’s studies.

In the end, Sborov’s clinical research earned her co-authorship of two published papers, which adds a feather in her cap as she approaches medical school. “That’s something very few students get,” Sborov said. “It’s huge to put on a medical school application.”

Sborov once worried that a career as a student-athlete wouldn’t allow for a pre-med path at Vanderbilt. But the university’s internship program has given her necessary experience unique to student-athletes across the country. Today, when Sborov meets opposing student-athletes at tournaments, they are surprised to learn about her studies. “I tell them I’m pre-med, and they’re like, ‘No way! How do you do that as an athlete?’” Sborov said. “I tell them Vanderbilt is really accommodating. With this internship they allow us to do a lot of things, and they work with our individual schedules. I don’t think student-athletes at a lot of other schools get that opportunity.”

To participate, Vanderbilt student-athletes apply and take part in an “interest survey” to tell administrators what kind of experience they need. The athletic department then hosts a career fair in the spring for Nashville-area businesses. Student-athletes can interview for positions and network with potential employers at the fair. On Fridays the athletic department teams with Vanderbilt’s Career Center and hosts career development workshops for interns, teaching network tips, job-search strategies and more. Interns then finish their summer with a “capstone presentation” to their peers and Vanderbilt’s administration.

Alison Wenzel, Vanderbilt’s assistant athletics director for student-athlete development, said the city of Nashville is key to the program’s success. While other SEC schools reside in small towns – and thus often offer in-house work experience – Vanderbilt has a booming commercial economy at its disposal. “We are really lucky in Nashville,” Wenzel said. “We have so many business partners who have wanted to be a part of this, and they have welcomed our student-athletes with open arms and offered incredible opportunities to do something they normally couldn’t do.”

Alan Young understands the true benefit of student-athletes in the real world. Young, a former defensive lineman at Vanderbilt, is CEO of Nashville-based security firm Armor Concepts. His company was one of the first to host a Commodore student-athlete in the internship program, and this summer Vanderbilt safety Emmanuel Smith spent his internship at Armor Concepts. Smith helped the firm with social media and marketing and used the experience for a project for a business class, as well.

But while the experience is important to student-athletes, Young recognizes just how valuable it can be to local employers. “The curriculum Vanderbilt has put in place makes it beneficial to the employers to want to have a student-athlete,” Young said. “It makes it beneficial to both sides. That’s the general failing of many internship programs: there’s no real structure. But Vanderbilt’s internship program is structured… I think it’s a model that a lot of [schools] should follow, if they aren’t following it already.”

Student-athletes such as Courtney Clayton take full advantage of the program. This summer the senior middle distance runner on the Commodores track and field team took part in two internships: One at Ibis Communications, a local public relations firm, and another at The Next Door, a nonprofit organization that offers transitional housing to women who were formerly incarcerated and/or overcoming addiction.

A sociology and communications major, Clayton has yet to narrow her potential career path; she often dreams of working for the FBI and, thus, might pursue law school. But Clayton is just as interested in fashion marketing. This summer Clayton spent 10 hours per week at Ibis and helped plan parts of L.A.’s Fashion Week in October. She also worked 20 hours a week at The Next Door, shadowing counselors who advised formerly convicted women on reintegrating into society with job training, etc. The latter is a carry-over from an internship Clayton held in 2015 with Corrections Corporations of America, where she earned clinical hours for her sociology major

“For a lot of student-athletes, it can be really hard to go out and get an internship that can take up 20-30 hours of your time in a week,” Clayton said. “Vanderbilt has provided us with a huge opportunity.”

That opportunity is already permeating throughout the Vanderbilt athletic programs. Plenty of Commodores have begun to realize that graduating with a degree is often only part of the equation. “It’s sort of rippled down through the teams,” Sborov said. “My teammates saw me do an internship, and now a lot of them are interested in doing internships next summer.”

When David Williams first decided to spearhead this effort, he sat down and asked himself, What is my purpose at Vanderbilt? Two years later he hopes this internship program becomes the new norm – and not just at Vanderbilt. According to Wenzel, other athletic departments have already contacted the Commodores and asked how they, too, can incorporate comprehensive off-field opportunities for student-athletes. Years from now, Williams envisions student-athletes across the country expecting work experience as a complement to their athletic careers.

And it all started right here at Vanderbilt.

“When they sign here, they enter into a mutual agreement,” Williams said. “They’re going to come here and give their best for four years. And we at Vanderbilt are going to put them in a situation where the rest of their life is changed. But we weren’t doing that; at least, we weren’t doing as much as we could.

“People ask me all the time, ‘What do you do?’” Williams continued. “I say, ‘We change lives and we save lives.’ That’s what we should be doing. We should utilize this platform we have and give student-athletes everything that’s going to make their lives better.”