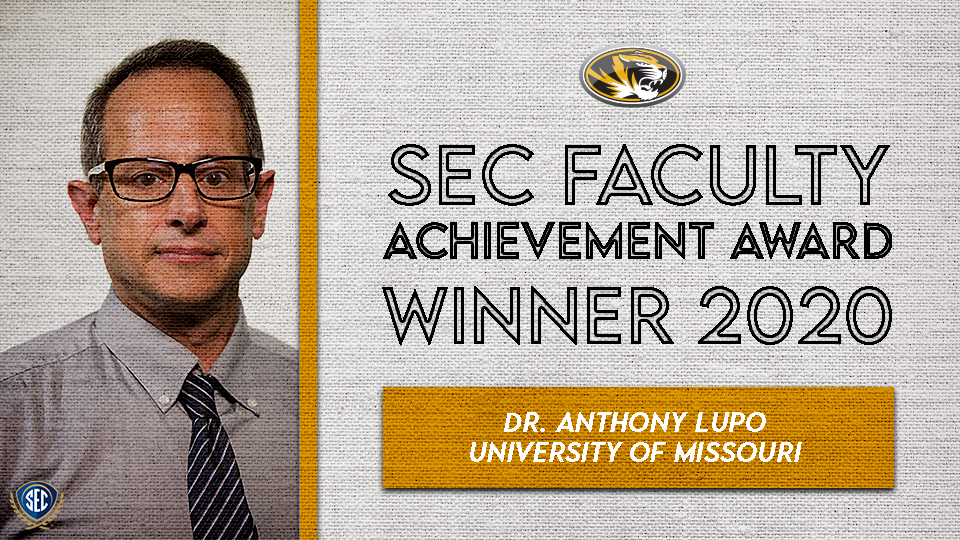 BIRMINGHAM, Ala. – Dr. Anthony Lupo, Professor of Atmospheric Science in the College of Agriculture, Food and Natural Resources, has been named winner of the 2020 SEC Faculty Achievement Award for the University of Missouri, the SEC announced Monday, April 13.

Dr. Lupo is a long-time member of both the American Meteorological Society and the National Weather Association. He researches large-scale atmospheric dynamics and teleconnections, climate dynamics and variability, tropical meteorology and climate change. A two-time Fulbright Scholar, Dr. Lupo has served on panels for the United Nations and edited or contributed to two books on hurricanes. He received the Most Distinguished Scientific Achievement Award by the Missouri Academy of Science in 2009 and was named the University of Missouri Professor of the Year in 2010.

“Dr. Lupo is a scholar and a teacher who is enthusiastic about his work and the ways in which we can connect our research to our public mission to serve,” said Latha Ramchand, Provost and Executive Vice Chancellor at the University of Missouri. “During his more than 20-year tenure at Mizzou, he has engaged in significant service and outreach for the university, for organizations abroad and for the entire meteorological scientific community. Further, he serves as mentor and brings a spirit of collaboration to every one of his classrooms.”