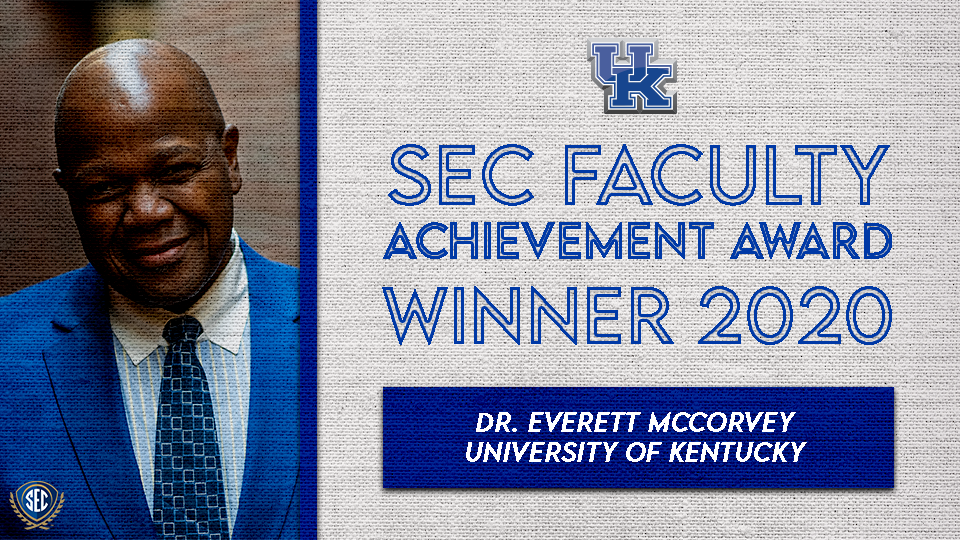 BIRMINGHAM, Ala. – Dr. Everett McCorvey, Professor of Voice in the School of Music, has been named winner of the 2020 SEC Faculty Achievement Award for the University of Kentucky, the SEC announced Tuesday, April 7.

Dr. McCorvey is a highly accomplished tenor who has performed in iconic venues both nationally and internationally, including the Metropolitan Opera, Kennedy Center and Radio City Music Hall in the U.S., and the Teatro Comunale in Florence, Italy and Queen Elizabeth Hall in London. Vocal excellence is the hallmark of his work with choirs and singers in concerts, master classes and workshops around the world. Dr. McCorvey received the UK Libraries Medallion for Intellectual Achievement Award and founded the American Spiritual Ensemble, a group of singers who perform spirituals and compositions of African American composers.

“With a true gift in musical arts, Dr. Everett McCorvey has brought our campus a deep and revitalized sense of culture, as well as a broader understanding of the field of music and how it contributes to a healthier, more constructive society,” said Dr. David Blackwell, Provost at the University of Kentucky. “He is the epitome of what it means to be a servant leader – what it means to be a member of the University of, for, and with Kentucky.”