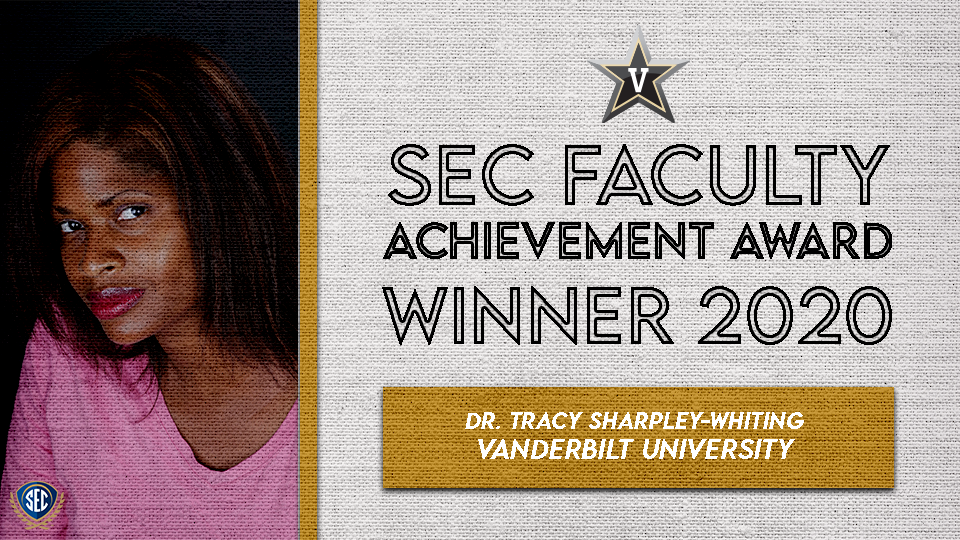 BIRMINGHAM, Ala. – Dr. Tracy Sharpley-Whiting, Gertrude Conaway Vanderbilt Distinguished Professor of Humanities (African American and Diaspora Studies and French) in the College of Arts and Science, has been named winner of the 2020 SEC Faculty Achievement Award for Vanderbilt University, the SEC announced Friday, April 17.

Dr. Sharpley-Whiting, named a top 100 young leader of the African American community by The Root, teaches and researches comparative diasporic literary and cultural movements; 18th– and 19th-century French narratives; critical theory and race; and film and black popular culture. She has written or edited 15 books and three novels, and she is currently drafting  the monograph, Men I’d Like to Have Known: The Adventurous Lives of a Revolutionary Romantic, A Contraband Soldier, An Africanist Auteur, and A Peripatetic Painter. Dr. Sharpley-Whiting has testified before Congress, lectures widely nationally and internationally and has offered commentary on a range of issues for C-SPAN2, Fox News, MSNBC, NPR, CBS News and Oprah Satellite Radio.

“As a prolific and renowned scholar, Professor Sharpley-Whiting has distinguished herself as a leading international authority on race and gender in Europe, the French Atlantic world and comparative black cultural movements,” said Susan R. Wente, Interim Chancellor and Provost at Vanderbilt University. “She is a dedicated member of the Vanderbilt community, multi-faceted intellectual and sought-after commentator whose interdisciplinary and transnational work influences our university, academia and the public domain.”