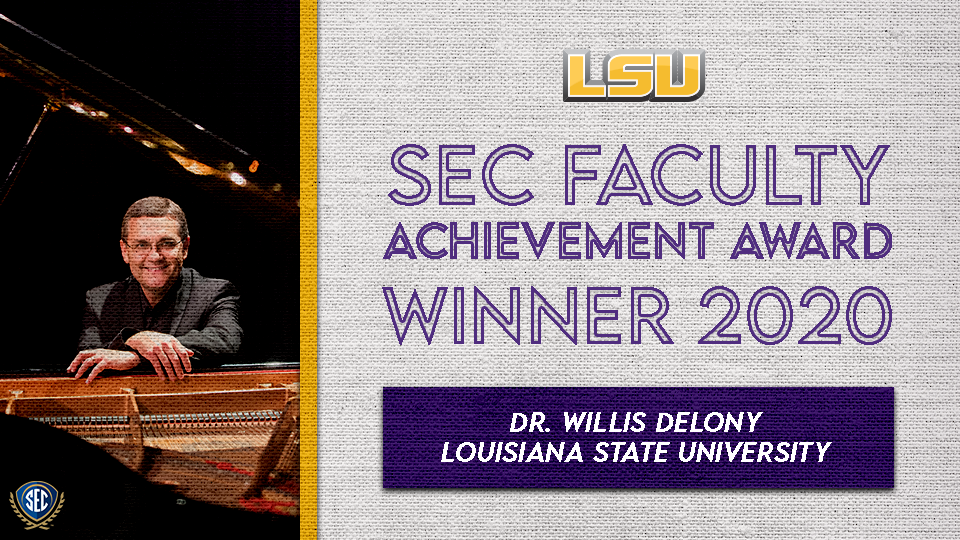 BIRMINGHAM, Ala. – Dr. Willis Delony, Boyd Professor of Piano and Jazz Studies in the School of Music, has been named winner of the 2020 SEC Faculty Achievement Award for LSU, the SEC announced Wednesday, April 8.

In a career spanning more than four decades, Dr. Delony has won acclaim as one of the nation’s leading classical/jazz crossover artists. He has been a member of the music faculty at LSU since 2000 and was recently awarded the highest and most prestigious academic rank at the university – the Boyd Professorship. Dr. Delony has appeared as a piano soloist, guest pianist/arranger, or conductor with orchestras in the U.S., Canada, the former Soviet Union and China. As a solo and collaborative recitalist, he has performed classical and jazz concerts around the world.

“Dr. Delony is a renowned pianist with a unique skillset that deftly crosses over between classical and jazz idioms. There are only a handful of people in the world who are as comfortable in a symphony orchestra as they are in a jazz trio, and he is one of them,” said Dr. Stacia Haynie, Executive Vice President and Provost at LSU. “Although he performs frequently around the globe, he continues to recruit ad mentor young pianists at LSU and beyond.”