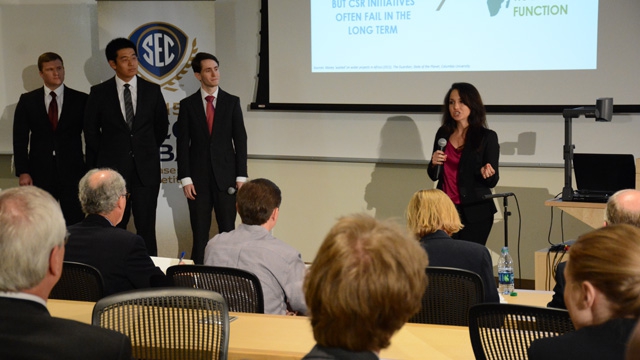 One unique aspect of the SEC Symposium is its consideration of student participants, both graduate and undergraduate. This year, in keeping with the theme of innovation and entrepreneurship, students will participate in a team pitch competition judged by SEC alumni.

The 2015 SEC Symposium entitled Creativity, Innovation and Entrepreneurship: Driving a 21st Century Economy, will take place Sept. 20-22 at the Hyatt Regency Atlanta and features the pitch competition on Monday.

Teams representing each of the SEC’s 14 universities will present their innovative ideas to a set of judges in two preliminary rounds. The top three teams will move on to the final round later that day where they will present their plan to a different set of judges and all SEC Symposium attendees. The winners will be announced during the SEC Presidents, Chancellors and Provosts Reception.

The annual SEC Symposium is part of SECU, the academic initiative of the Southeastern Conference. For more information on the event and to register, visit www.SECSymposium.com.

Below is the list of SEC alumni judges, along with their universities and biographies.

Edward Birchfield, Jr. – Auburn University
Edward Birchfield, Jr., is a partner with TechCXO and a founder of The Sales Leadership Forum. Birchfield’s focus is on sales effectiveness and sales productivity, with expertise in sales strategy, customer segmentation, and channel strategy, among others. He co-founded ADTRAN, a designer and manufacturer of communication equipment. Under Birchfield’s leadership, ADTRAN’s sales organization grew to more than $90 million. He earned a B.S. degree in finance from Auburn University and his MBA from the University of Georgia.

Fred Carl, Jr. – Mississippi State University
Fred Carl, Jr., served as Chairman, President and Chief Executive Officer of Viking Range Corporation until his retirement in 2013. Viking Range Corporation, which Carl incorporated in 1984, is an industry-leading manufacturer of upscale kitchen appliances. He was inducted into the National Kitchen and Bath Association Hall of Fame in 1994 and was selected as the Mid-South Entrepreneur of the Year in 1996. Carl served as co-chair for the Housing Committee on the Governor’s Commission on Recovery, Rebuilding and Renewal in the wake of Hurricane Katrina. He currently serves on the Advisory Board of Mississippi State University’s College of Architecture.

Brad Courts – University of Mississippi
Brad Courts is Vice President and Director of Atlantic Investment Company (AIC) and a partner with Colony Capital Management. Courts concentrates on growing the Colony Capital platform and researching long-term investments for AIC. In 2004, he played a key role in creating Pointer Capital, the registered investment adviser arm of AIC, and initiated the acquisition of Colony Capital in 2012. Courts holds the Certified Financial Planner designation and the Series 65 license and is a licensed real estate broker in Georgia. He earned his B.A. degree from the University of Mississippi.

Cynthia Day – University of Alabama
Cynthia Day is Chief Executive Officer and President of Citizens Bancshares Corporation and Citizens Trust Bank. Citizens Trust Bank is a leader in the financial services industry and one of the largest minority-owned financial institutions in the nation, offering a full range of quality business and consumer products and services. Before joining Citizens Trust Bank, Day served as an audit manager for KPMG. Since 2011, she has been an Independent Director at Aaron’s, Inc. Day serves on the Board of Directors of the National Banker’s Association and is a member of the Georgia Society of CPAs. She earned a B.S. degree from the University of Alabama.

Tim Faber – University of South Carolina
Tim Faber is Managing Partner of Faber Products, LLC. Based in Tucker, GA, Faber Products is an e-commerce-based personal care products company. Mr. Faber has been involved in more than nine startups in such areas as orthopedic distribution, systems integration, executive recruiting, wholesale bakery and commercial playground equipment. He has extensive experience working with private equity groups and has played a variety of roles raising venture capital. Faber earned a B.S. degree in computer science from the University of South Carolina. He and his wife, Karen, endowed $1 million to South Carolina to start the Faber Entrepreneurship Center at the Darla Moore School of Business.

Bill Frerking – University of Missouri
Bill Frerking is Vice President and Chief Sustainability Officer at Georgia-Pacific. Frerking oversees the company’s overall sustainability efforts, including working with Georgia-Pacific’s business units and procurement and staff groups to develop and implement sustainability strategies, goals, measurement and reporting. He represents the company in sustainability discussions with customers and other groups. His legal background has allowed him to work as an environmental compliance attorney in private practice and with other organizations. He earned his J.D. degree from the University of Missouri.

Brian Henley – University of Arkansas
Brian Henley is Executive Vice President of Corporate Development and Mergers at Magnitude Software. Based in Austin, TX, Magnitude Software develops enterprise information management software that is used by more than 600 customers in more than 100 countries. Henley is responsible for developing and executing strategies and plans to acquire businesses and establish strategic revenue-producing partnerships. He has more than 20 years of experience in building successful technology businesses. Henley’s experience spans the business spectrum from large corporations to early stage ventures, including building two startups that were acquired by public companies. He earned a B.S. degree in industrial engineering from the University of Arkansas.

Rhonda Holt – University of Florida
Rhonda Holt is Principal Executive and Vice President of Engineering and Operations at TrustedCare, Inc., a health technology start-up in its early stages of development. Prior to starting TrustedCare, Holt served as Senior Vice President of Digital Media Technologies for Turner Broadcasting Systems. A graduate of the University of Florida, Holt continues to support her alma mater. In 2008, she established the Rhonda D. Holt Endowment for Academic Excellence to support freshmen engineering students in the College of Engineering’s STEPUP (Successful Transition through Enchanced Preparation for Undergraduates Program), as well as graduate students who participated in the program who are now a part of the Florida Institute for Development of Engineering Faculty.

Jamie Leddin – University of Kentucky
Jamie Leddin is the founder of Wedgewood Group, a boutique management consulting firm. Leddin’s vision was to create an effective partner for both public and private sector organizations. Under her leadership, Wedgewood Group experienced double-digit revenue growth each year and Inc. 5000 named the firm to its “List of America’s Fastest Growing Privately Held Companies”in 2011. Leddin serves as the board co-chair for the University of Kentucky’s Innovation Network for Entrepreneurial Thinking (iNET). iNET provides entrepreneurial minded students the unique opportunity to work with faculty and business professionals, live in an entrepreneurial focused dormitory, incubate business ideas and receive coaching and mentorship.

Jake Rohn – University of Georgia
Jake Rohn has spent his entrepreneurial career focused on software solutions for business professionals. Rohn was a founder of Capiche, a software company that specialized in language interpretation products. In 2014, Capiche was sold to Stratus Videos. The company currently provides on-demand interpreter services in more than 175 spoken and signed languages. Prior to Capiche, Rohn founded Albridge Solutions, a business management platform for financial advisors. By the time the company was acquired by PNC Bank in 2007, it managed more than 40 million investment accounts. Rohn earned his B.B.A. in finance from the University of Georgia.

David Stevens – University of Tennessee
David Stevens is a private investor who focuses on providing capital to lower-middle market growth companies in the healthcare services industry. Prior to becoming a private investor, Stevens was the founder of Accredo Health, a leading provider of pharmacy services to the biopharmaceutical manufacturing industry. He served as Chairman of the Baord and Chief Executive Officer until Accredo was acquired by Medco Health Solutions in 2005. He currently serves on the Board of Directors for two public companies, Allscripts Healthcare Solutions and Wright Medical Group. Both companies are listed on the NASDAQ exchange. Stevens earned his B.S. in accounting from the University of Tennessee.

Chris Valletta – Texas A&M University
Chris Valletta is a co-founder of Mission Athletecare, which creates innovative products for high-performance athletes. In the company’s first full year, distribution expanded nationwide to more than 10,000 locations. After playing three seasons in the NFL, Valletta launched a real estate company that merged a growing trend in the Texas real estate market with the same direct-response selling tools utilized in electronic media, resulting in transactions of more than 20 single-family residential homes in the first year of operation, with values in excess of $4 million. In 2005, he and his company were selected to appear on NBC’s reality show “The Apprentice.” Valletta earned his B.A. in speech communication, rhetoric and political science from Texas A&M University.

Rick Wolfert – Louisiana State University
Frederick “Rick” Wolfert has more than 30 years of experience in global commercial finance and banking. Most recently, Wolfert served as Vice Chairman of Commercial Finance at the CIT Group in New York City. Prior to joining CIT, Wolfert was President and Chief Executive Officer of GE Healthcare Financial Services. He also served as chairman-elect of the Equipment Leasing Association of America (ELA), a national leasing industry trade organization representing more than 800 member companies. Prior to joining GE, Wolfert was Chairman, President and Chief Executive Officer of KeyCorp Leasing Ltd., where he was responsible for the company’s $5 billion leasing group. He earned his B.S. in business administration from Louisiana State University.