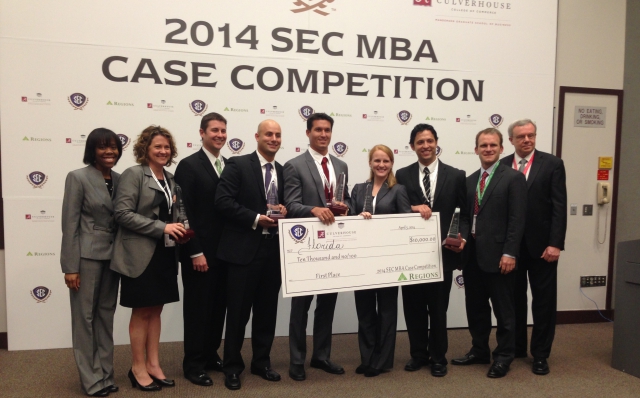 TUSCALOOSA, Ala. – The University of Florida repeated as the winner of the 2014 SEC MBA Case Competition on Saturday afternoon. The competition, in its second year, was hosted by the Culverhouse College of Commerce at the University of Alabama.

A team of four MBA students from every SEC university was presented a business case from Regions Bank, the event sponsor, on Friday morning. The teams, who were separated into four divisions, proposed their solutions to a panel of business executives on Saturday morning in divisional rounds. The top four proposals moved on to the final round that determined the winner of the competition.

“We are very honored to win amongst a field of very accomplished MBA programs,” said Jason Rife, Associate Director of MBA Career Services at the Hough Graduate School of Business at the University of Florida. “Our students put in a lot of hard work and we’re very proud.”

“Our team knew this was the last time we would compete together and I’m very proud of how we prepared and executed,” said Escue.

“We were honored to be this year’s host of the SEC MBA Case Competition,” said J. Michael Hardin, Dean of the Culverhouse College of Commerce. “The SEC is not only the best conference for competitive sports, but I believe we have some of the best and brightest students, and they are here representing all 14 SEC universities.”

The 2015 SEC MBA Case Competition will be held at the University of South Carolina in Columbia.

A full list of winners from the 2014 SEC MBA Case Competition is below.