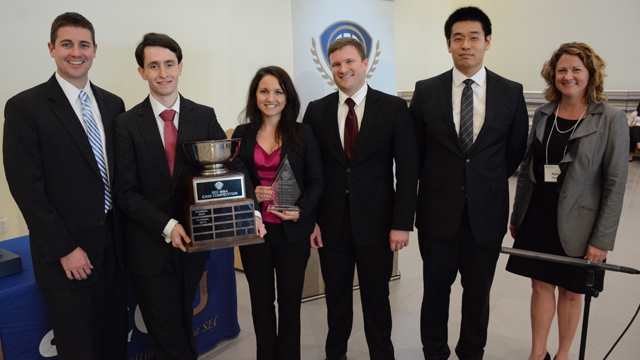 COLUMBIA, S.C. – The University of Florida took first place in the 2015 SEC MBA Case Competition held at the Darla Moore School of Business at the University of South Carolina on Saturday. The win is Florida’s third consecutive at the event.

“It is a great honor to be part of Warrington’s MBA program and a relief to uphold the tradition of winning this competition,” said David Price, a member of Florida’s team.

A team of four MBA students from every SEC university was presented a business case centered on the sustainability of an African mining company on Friday morning. The teams, who were separated into four divisions, proposed their solutions to a panel of business executives on Saturday morning in divisional rounds. The top four proposals moved on to the final round that determined the winner of the competition.

“We were especially excited to have students focus on a case which challenged them to find a strategic solution to an endeavor which, framed in a global context, mirrors many of the challenges regional, national, and global organizations face today,” said Marcelo Frias, Managing Director of Full-Time MBA Programs at the Moore School of Business. “Doing so within the context of sustainability also creates a perfect platform for these groups of MBA students to exercise their strategic problem solving skills.”

The 2016 SEC MBA Case Competition will be held at the University of Arkansas.

A full list of winners from the 2015 SEC MBA Case Competition is below.