For SEC Professor of the Year, Teaching is in the Genes 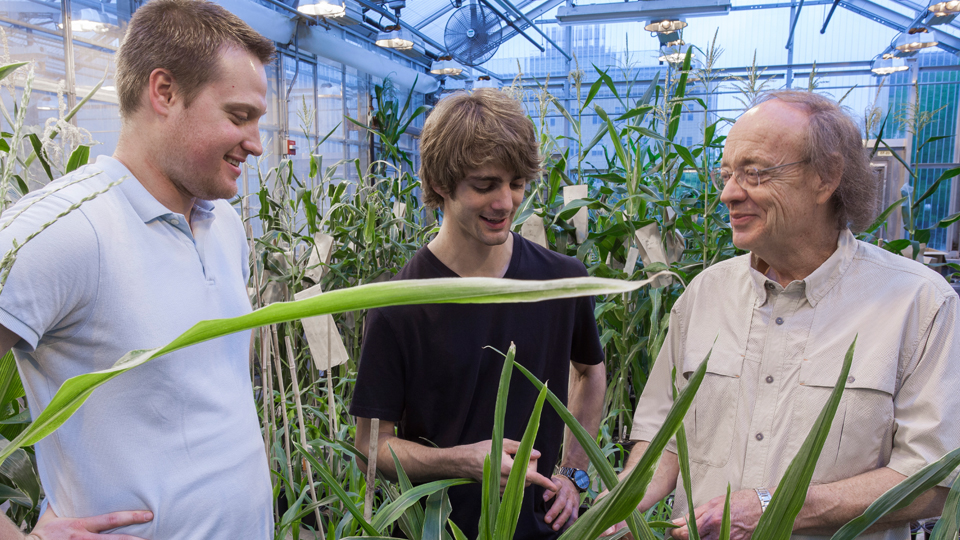 Developing relationships with students has always been a priority for Dr. Jim Birchler, the 2017 SEC Professor of the Year.

Children are often asked, “What do you want to be when you grow up?” While it’s usually meant to gauge their interests or just for fun, some children will give a direct answer based on professions they are aware of through their family. And if you asked a young Jim Birchler what he wanted to be, he probably would have answered, “A teacher.”

Birchler’s journey to becoming a world-renown geneticist and the 2017 SEC Professor of the Year started in Sparta, Ill. His father taught high school physics and chemistry while his mother, who grew numerous plants in their home, taught first grade. Birchler’s family, including his sister, lived on a farm where they raised cattle and grew corn, soy beans and wheat.

“Looking back, I always had an inclination for scientifically-oriented issues,” said Birchler. “So developing my passion for this field of work was a natural progression.”

Birchler’s curiosity about science was evident at an early age, even when he was unable to fully comprehend the subject matter.

“My mother subscribed to National Geographic and she can recall many occasions when I would thumb through the magazine as a young child,” said Birchler. “Although I couldn’t read at the time, she said I showed a lot of interest in the content.”

His passion for science and nature continued to develop. He was involved in numerous science fairs and took any science course he could in high school. After high school, Birchler majored in botany and zoology at Eastern Illinois University.

Birchler loved research and thought he would focus on science. But fate intervened in the form of his professors.

“Initially, being a college professor was never a goal,” said Birchler. “But because Eastern Illinois had a cap on the number of students per class, I was able to develop personal relationships with my professors and several of them suggested that I go on to graduate school. That encouragement is the reason I’m sitting in this chair today.”

Developing relationships with students has always been a priority for Birchler. While this may be an easy feat when mentoring upper-level students, it can be a challenge in an undergraduate course with more than 350 students. But Birchler has a technique to help him get to know his students.

“I reserve the 16 seats on the front row for students who are selected as that day’s ‘Sweet 16,’” said Birchler. “Those students will have their names projected on the screen when they walk into class and they know to come to the front and find their reserved seat and name tag. I will introduce myself before class starts and they can ask a question about the lecture or genetics in general and I will respond on the course’s website. This allows me to get acquainted with each student over the semester, gather feedback on the class and structure future lectures.

I feel sorry at times for students at large universities who don’t get to know their professors, but I do the best I can to create an opportunity with my students.”

While Dr. Birchler puts an emphasis on getting to know his students, it’s easy for his students to remember him. As a postdoctoral student, one of Birchler’s professors would impersonate famous figures in biology during lectures. This inspired Dr. Birchler to use a similar tactic involving Gregor Mendel, widely known as the father of modern genetics, in his intro to genetics course.

“I thought one way I could make the subject more entertaining would be to impersonate Mendel performing his experiments when he formed the elementary laws of genetics,” said Dr. Birchler. “Since Mendel was a monk, I went to a local costume shop to find a monk’s abbot to complete the look. I’m sure there are plenty of pictures and videos online of these lectures.”

Dr. Birchler’s teaching style has not gone unnoticed. He has received numerous awards over the years, including being recognized as a “Teaching Legend” by Mizzou magazine in 2003. But it is the gratitude from his students that he takes to heart.

“Many years ago, I went to my mailbox and found a rejection letter for a paper I submitted to a publication. As I continued to look through the mail, I found a lengthy thank you note from a student. I kept the letter on my desk for a while to help pick me up and I eventually received another nice note. I placed those in a folder in my filing cabinet and I continue to save notes from my students. The folder is now a few inches thick.”

When you take a look at the accolades Dr. Birchler has earned over the years, it is safe to say he was born to make a lasting impact as an educator. And if you ask Dr. Birchler and his sister, who also happens to be a teacher, their love for teaching ran in the family.

“As a geneticist, I always joke that all of this is just genetic.”