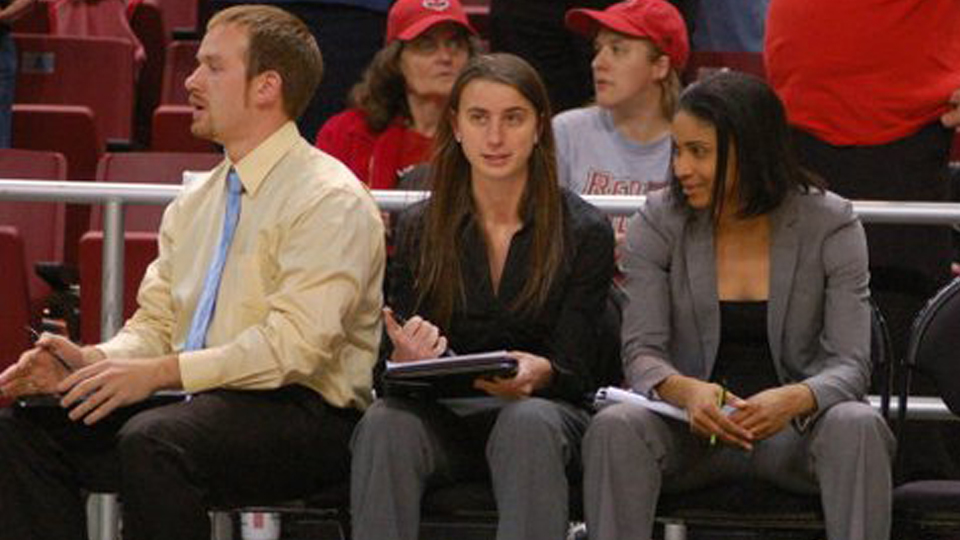 Leslie Larsen (center) was an assistant coach for the Arkansas State women's basketball team before pursuing her Ph.D. at the University of Tennessee

Five years ago, Leslie Larsen was living her dream as a women’s basketball assistant coach at Arkansas State University. The former student-athlete had earned her master’s degree in Kinesiology with an emphasis on Sport Psychology, and she was passionate about coaching.

“I loved building that coach-athlete relationship with my players and watching them develop as people and athletes,” said Larsen.

After several years on the bench, however, Larsen began to notice a discouraging trend in her profession.

So after being an assistant coach for three years, she decided to step away from coaching to pursue academic research in that area of personal interest to her.

“I thought I could have a broader impact on the system as a researcher than as a coach,” said Larsen.

In 2013, Larsen enrolled in the Sport Psychology and Motor Behavior doctoral program at the University of Tennessee in Knoxville after meeting Dr. Leslee Fisher, an Associate Professor of Sport Psychology there.

“I met Dr. Fisher at a conference and we really clicked,” said Larsen. “She is one of only a few scholars researching the topics of women, LGBT and racial concerns in the field of sport psychology.”

In the context of her studies, Larsen heard about the NCAA’s Graduate Student Research Grant. Although the program called for proposals centered around student-athletes, Larsen believed her research into the coaching profession was relevant. In January, she was selected as one of five recipients of the NCAA grant.

“After looking at how African American coaches can be great mentors for African American student-athletes, it was easy to make a case for this study being worthy of NCAA support,” said Larsen.

Her proposal, entitled More Than Recruiters: The Experiences of African American Female Assistant Coaches in NCAA Division I Women’s Basketball, studies how African American coaches are being developed for head coaching positions.

Currently, the Southeastern Conference (SEC) is home to half of all African American female head coaches in the Autonomy Five conferences, which include the Atlantic Coast Conference (ACC), Big Ten Conference, Big 12 Conference and Pac-12 Conference.

“I want to help improve the head coaching development process of African American females,” said Larsen. “I got into coaching to inspire other women and I believe I can continue that through my research.”

Since its inception in 2007, Larsen becomes the seventh graduate student from an SEC member university to receive the NCAA Research Grant. Previous winners have included the University of Alabama’s Chan Park, who studied the impact of adaptive athletic programs on student-athletes with physical disabilities; the University of South Carolina’s Amber Falluca, who studied the perception of a university’s faculty senate of college athletics; and Vanderbilt University’s Willis Jones, who studied the relationship between athletic expenditures and team on-field success.