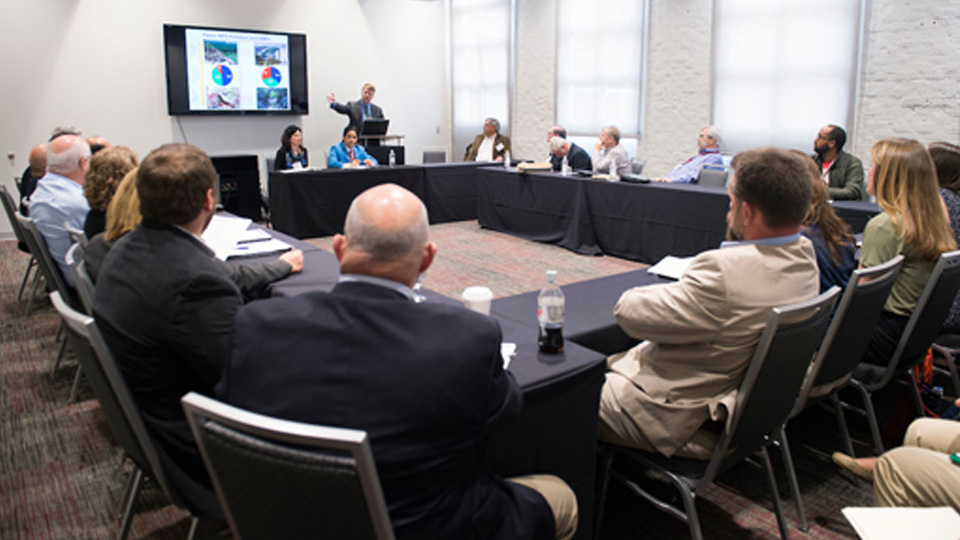 STARKVILLE, Miss. — A collaborative conversation on a simple topic – water – is yielding discussions that literally could change the world, and researchers are saying that change is critical for meeting increased water needs around the globe.

About 200 participants gathered March 27-28 for the 2017 SEC Academic Conference hosted by Mississippi State University. The conference focused on “The Future of Water: Regional Collaboration on Shared Climate, Coastlines and Watersheds.” With an emphasis on research collaboration, the conference highlighted how water, in its simplicity as the earth’s most life-giving resource, poses some of the world’s most complex scientific and social challenges.

In addition to researchers, academic leaders and students from all 14 SEC universities, governmental organizations including the National Oceanic and Atmospheric Administration, U.S. Department of Agriculture, U.S. Geological Survey, the Environmental Protection Agency and Mississippi’s Delta Council, among others, were represented.

MSU President Mark E. Keenum, who also is serving a term as president of the SEC, said research, technology and innovation are keys to making progress in water utilization issues.

“It won’t happen without a serious commitment to science, research and innovation. It will be through universities like Mississippi State and all of the universities represented here today,” Keenum said Monday [March 27]. “We have no choice as human kind. We have to be looking for ways to survive and do it in the most efficient and effective ways possible. That’s why this conference is so important.”

“This conversation is incredibly important. As we go forth, we bring you together not simply for 36 hours of conversation, but hopefully to facilitate collaboration across our 14 great universities,” Sankey said. “The service, research, education and, quite frankly, the leadership that we need on these and other important social issues comes from our campuses,” he added.

Torie Johnson, executive director for SECU, the academic initiative of the SEC, said the SEC Academic Conference represents an expanded slate of academic programming currently supported by the Southeastern Conference.

“Ideally, the conference is the beginning of a conversation that continues indefinitely involving these important topics,” Johnson said.

Throughout the presentations, the expert speakers repeatedly conveyed urgency, noting the rapid depletion of ground water, increased demand for water in conjunction with population growth, and concerns about climate variability issues.

“The shortage of water is no longer a scientific concern – it’s a societal concern,” said Venkat Lakshmi of the University of South Carolina during a talk on “Hydrological Extremes from Space.”

Catie Dillion is an MSU master’s student in agricultural and biological engineering interested in sediment transfer related to coastal change—an issue impacted by sea level rise. Dillon said the conference offers students a chance to step out of the traditional classroom setting to hear from additional experts who “drove home” the significant nature of problems she has been hearing about for some time.

“We’re all working toward the same goal, which is to make things better and make sure we’re doing the best we can so future generations don’t have to face an even worse situation,” Dillon said. “That’s what scientists do—they prepare for the future, and they give to the next generation.”

James Dobrowolski, national program leader for water for the USDA’s National Institute of Food and Agriculture, said attending an event like the SEC Academic Conference helps him gain a better understanding of regional water issues.

“In some cases, they’re quite local, and if you don’t get out and see some of those issues and understand them, then they’re really pretty academic,” he said, also explaining that he likes meeting project managers working with various USDA grants. He said the conference promotes education and recruitment of new scientists in agriculture and related fields.

“Plus, I’m an old professor, so I enjoy meeting the graduate and undergraduate students,” said Dobrowolski, who spent 16 years in academia before moving into government. Now, he manages $42 million in competitive grants for the Water for Agriculture Challenge Area launched by USDA in 2014.

As a Tuesday [March 28] speaker, Dobrowolski discussed how improvements to wastewater management are key to sustainable development. He said more than 80 percent of the world’s wastewater is released without treatment, but rapid technology developments over the last few years have made it possible to effectively treat wastewater to safe, clean potable levels that exceed drinking water standards. He said several countries, particularly those in arid areas, are recycling water at high rates.

Around the world and in the U.S., raising public acceptance and social awareness of wastewater reuse is an issue, he explained.

“They are looking at all aspects of how the issues affect communities and the environment, including biological, ecological and economic perspectives,” Ryan said, noting that academic leaders must pursue solutions.

“We have to take a lead, and we have to be quite aggressive about it,” Ryan said.

SECU is the academic initiative of the SEC, serving as the primary mechanism through which the collaborative academic endeavors and achievements of SEC universities are supported and advanced.