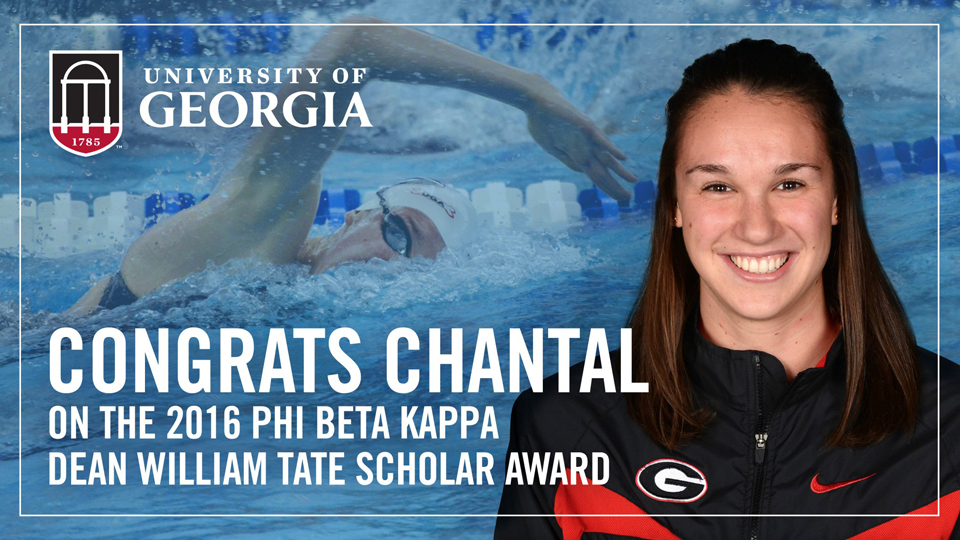 The Dean William Tate Scholar is an award given annually to an outstanding inductee of Phi Beta Kappa, having earned a perfect 4.0 in his or her field of study. Van Landeghem, a senior studying psychology, is Georgia’s first-ever student-athlete to receive the award.

During the ceremony, the Olympic bronze medalist, nine-time SEC champion and one-time NCAA champion, gave remarks to the newly inducted Phi Beta Kappa class and was presented with a Phi Beta Kappa key.

“Today means so much,” Van Landeghem said. “I’ve always taken my academics very seriously and they’ve been a top priority for me. To be recognized for that today and to be able to congratulate all the inductees was a huge honor. Today definitely ranks very high (in all my accomplishments).”

In her remarks to newly inducted members, Van Landeghem reflected on her swimming career and the successes and failures she has faced throughout her lifetime. She challenged fellow inductees to pursue what they are passionate about and use grit and determination to reach their goals.

Humphreys is a junior from Athens studying biochemistry, molecular biology and Spanish. He was chosen for the SEC Academic Honor Roll during his freshman and sophomore years and serves as one of the swimming and diving representatives on the Student-Athlete Advisory Committee.

“It means a lot to me, as well,” Humphreys said. “Like (Van Landeghem), I take my academic studies very seriously. It was nice to be recognized for that today. I always want to try and represent Georgia swimming and diving as best I can.”

Finsness, a senior from Wellington, Florida, is studying biology. She was named the 2015-16 SEC Rider of the year on Equitation on the Flat and was named First-Team NCEA Academic All-American.

Phi Beta Kappa is a highly selective, merit-based organization that honors the best and brightest students in sciences and liberal arts at their respective colleges.