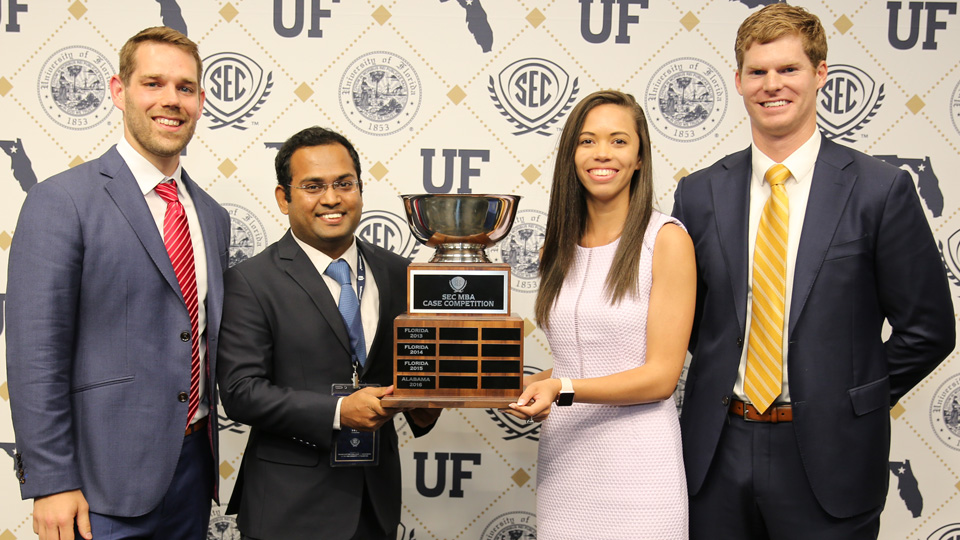 Members of the Georgia team pose with the competition's traveling trophy.

GAINESVILLE, Fla. – The University of Georgia won first place in the 2017 SEC MBA Case Competition held at the Warrington College of Business at the University of Florida on Saturday. The winning team was comprised of Rohit Banerjee, Matthew Green, Desiree Sullivan and Noah Winterer.

A team of four MBA students from every SEC university was presented a business case by Nationwide on Friday. The teams, who were separated into four divisions, proposed their solutions to a panel of judges on Saturday morning in divisional rounds. The top four proposals moved on to the final round to determine the winner of the competition.

“Winning this competition is so rewarding because we gave so much effort and stayed up late into the night,” said Sullivan. “We put together a bold strategy and it took a lot of endurance to prepare our presentation.”

“Our team was well-prepared because we knew we would be going against some of the best business schools,” said Anne Cooper, Georgia’s team advisor. “But I felt confident because they are all great presenters.”

A full list of winners from the 2017 SEC MBA Case Competition is below.