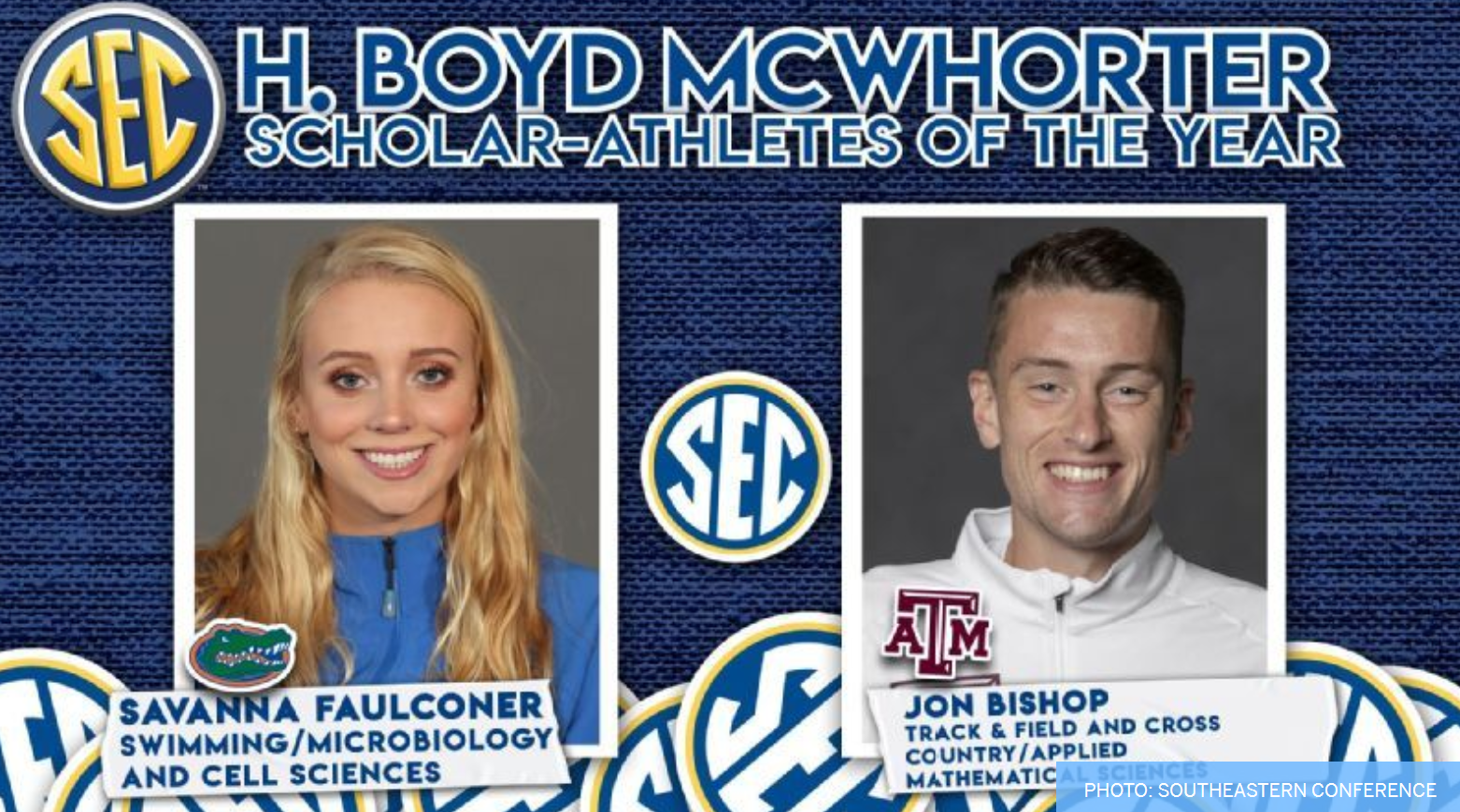 The two were chosen by a committee of Faculty Athletics Representatives from SEC universities and each will receive a $20,000 post-graduate scholarship.

“Savanna and Jon are outstanding representatives of student-athletes from across the SEC. They both achieved excellence in their competitive and academic pursuits, which represents the highest level of success through their experiences as student-athletes,” Sankey said. “The H. Boyd McWhorter Award is the highest honor earned by a student-athlete in the SEC and I congratulate both of them along with their families and universities on their outstanding achievements, especially during the unique circumstances presented by the last 14 months.”

The McWhorter Award adds to a long list of academic and athletic achievements for Faulconer, a Greenville, S.C., native. Faulconer, who majored in microbiology and cell science with a minor in educational sciences and pathogenesis, boasts a 3.93 grade-point average and graduated with Cum Laude honors earlier this month. The swimmer, who plans to attend medical school, currently serves as an intern with Shands Clinical Microbiology Lab and credits that experience as the reason for desire to become a pathologist. During her time at Florida, Faulconer was a four-time CSCAA First Team Scholastic All American and was named to the SEC Academic Honor Roll all four years she competed with the Gators (2017-2020). She was ranked in the top 16 at nationals in the 400 IM and was awarded All-American status in 2020. Additionally, she was awarded the UF Swimming and Diving Most Valuable Player Award after she placed 19th in the 400 IM for the Gators at the 2017 NCAA National Championships. Her fastest 400 IM time came at the 2019 SEC Championships, where she placed first in the B-final and ninth overall with a time of 4:06.59. That time ranks sixth on UF’s All-time list. In her final year with the Gators, Faulconer was team captain and helped lead UF to a second-place finish at the 2020 SEC Championships.

Bishop has been a success story on the field of competition and in the classroom. The College Station, Texas, native was the 2020 SEC Indoor and Outdoor Scholar Athlete of the Year. He also earned USTFCCCA Academic All-America Second Team honors. In total, he has been named to

the SEC Academic Honor Roll on six occasions. In competition, Bishop was a NCAA Cross Country Championships qualifier in 2017. He is a two-time All-SEC finisher, once in the indoor 3000m and once in cross country. Bishop has four Texas A&M all-time top-12 marks to his name, including the fourth-best indoor 3000m at 8:06.53. Already a graduate with his bachelor’s in Applied Mathematical Sciences, Bishop is currently pursuing his master’s in computer science.