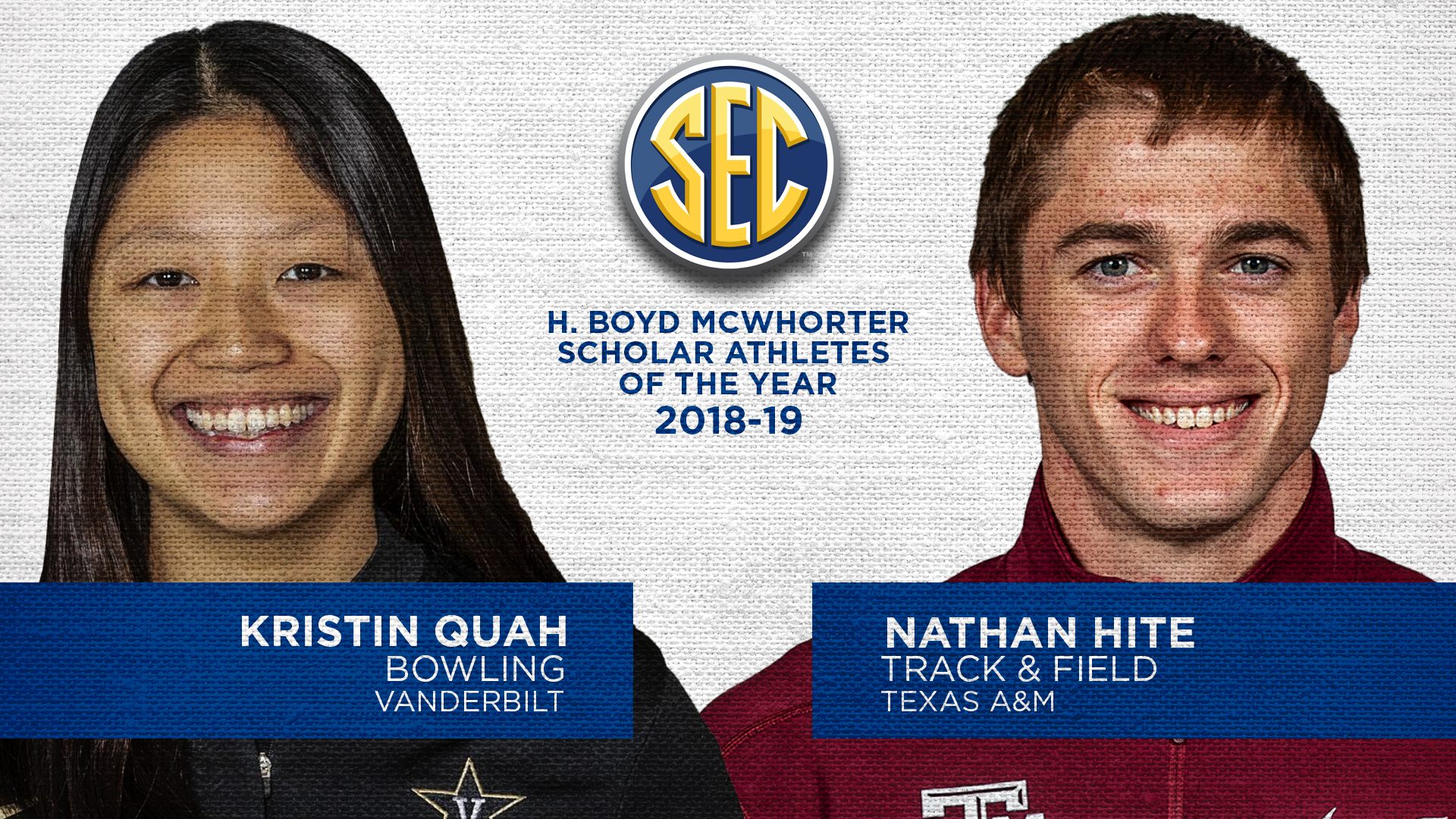 The two were chosen by a committee of Faculty Athletics Representatives from SEC universities and each will receive a $20,000 post-graduate scholarship, provided by AT&T, an SEC official sponsor. Hite and Quah will be honored at the annual SEC Awards Dinner during the SEC Spring Meetings in Sandestin, Fla., the last week of May.

“Kristin and Nathan are representative of the focus, determination and success of SEC student-athletes in competition and in the classroom,” Sankey said. “These young people are committed to the total student-athlete experience and it is reflected in the elite level of their academic and athletics accomplishments. The H. Boyd McWhorter Award is the highest honor earned by a student-athlete in the SEC and I congratulate Kristin and Nathan along with their families and universities on their outstanding achievements.”

Hite, a Mechanical Engineering major with a 3.974 grade point average at Texas A&M, twice received the NCAA Elite 90 Award for having the highest cumulative grade-point average among athletes competing in the NCAA Track & Field Championships. He placed first in 2017 CASMART Challenge (Consortium for the Advancement of Shape Memory Alloy Research and Technology), a semester-long interscholastic competition between undergraduate teams to create and test a shape memory alloy with specified properties for use in creating a space habitat.

He earned USTFCCCA All-Academic honors in 2017 and 2018 and was named Bill Erwin male Scholar-Athlete of the Year among all sports at Texas A&M in 2018 and 2019.

Quah, who is majoring in Biomedical and Electrical Engineering, has maintained a 3.95 cumulative grade point average while being named All-American on three different occasions. As one of nation’s best spare shooters, she helped the Commodores win the Southland Bowling League in 2017 before playing a key role in Vanderbilt’s NCAA title in 2018. She was named to nine all-tournament teams during her career, winning four times. Prior to Vanderbilt, Quah was a member of Singapore’s national team from 2011-2015.

She is a two-time winner (2008, 2019) of the NCAA’s prestigious Elite 90 Award at the NCAA Bowling Championship for having the highest GPA (3.95) of all competitors 2018, 2019. Quah is seven-time honoree on the Vanderbilt dean’s list, a three-time SEC Academic Honor Roll recipient and won the Biomedical Engineering Society’s Undergraduate Student Design and Research Award in 2018.

Quah is a member of Tau Beta Pi and IEEE-ETA Kappa Nu Honor Societies as well as a Vanderbilt Undergraduate Littlejohn Summer Research Scholar. She is an active participant in SAAC at Vanderbilt and taken part in the group’s holiday party and field day, which benefit Nashville-area elementary schools. She has volunteered with Feed the Children and served as a department tutor at the School of Engineering at Vanderbilt. Next year, Quah will pursue her Ph. D. while doing MRI research at Stanford University.