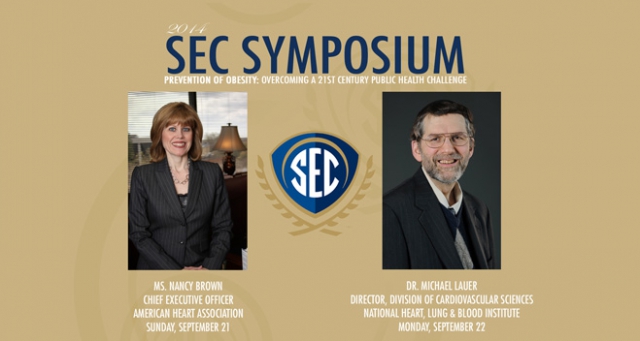 Ms. Nancy Brown and Dr. Michael Lauer will be the keynote speakers at the 2014 SEC Symposium

The featured speakers, announced by the SEC on Thursday, are Nancy Brown, Chief Executive Officer of the American Heart Association, and Dr. Michael Lauer, Director of the Division of Cardiovascular Sciences at the National Heart, Lung, and Blood Institute. Ms. Brown will deliver her keynote address on Sunday, September 21, while Dr. Lauer’s keynote address will take place on Monday, September 22.

Obesity prevention and treatment are popular topics among media, lawmakers and healthcare professionals. While the subjects have gained attention during the past decade, the U.S. has not seen a significant reduction in population-level obesity rates over the same 10-year span.

Researchers at the 2014 SEC Symposium hope to identify ways to markedly reduce America’s obese and overweight populations. Presentations will focus on a variety of topics, including early-life, genetic and environmental influences on weight status, workplace strategies for obesity prevention and technology-based interventions to prevent obesity.

Designed to address a significant scholarly issue utilizing the range of disciplines represented by the SEC’s 14 member universities, the 2014 SEC Symposium is led by the University of South Carolina.

“We are thrilled Ms. Brown and Dr. Lauer have agreed to deliver keynote addresses for our second SEC Symposium,” said Torie Johnson, Executive Director of SECU, the SEC’s academic initiative. “In 2014 obesity-related conversations are inescapable, and to have them both commit to our program focusing on obesity prevention is significant given their expertise and work in comprehensive heart health.”

In addition to her work with the AHA, Brown serves as the 2014 chairperson of the National Health Council and co-chair of the Steering Committee of the Coalition to Transform Advanced Care. She also is a member of the Executive Committee of Research!America, and on the Boards of Directors of the Campaign for Tobacco Free Kids, the Alliance for a Healthier Generation, and the Valentin Fuster-Mount Sinai Foundation for Science, Health and Empowerment.

Dr. Lauer leads the National Heart, Lung, and Blood Institute’s program for research on the causes, prevention and treatment of cardiovascular diseases. He received education and training at Rensselaer Polytechnic Institute, Albany Medical College, Harvard Medical School, Harvard School of Public Health and the NHLBI’s Framingham Heart Study. He spent 14 years at the Cleveland Clinic as Professor of Medicine, Epidemiology, and Biostatistics.

During his tenure at the Cleveland Clinic, Lauer led a federally funded, internationally renowned clinical epidemiology program that applied big data from large-scale electronic health platforms to questions regarding the diagnosis and management of cardiovascular disease. Since coming to the NHLBI in 2007, he has promoted efforts to leverage big data infrastructure to enable high-efficiency epidemiology, comparative effectiveness research, and clinical trials.

This academic conference-type event will include keynote presentations, small-room discussions on topics of current research interest and poster presentations. In addition, SEC Symposium attendees will be able to visit the SEC University Showcase and attend the SEC Presidents, Chancellors and Provosts Reception, while undergraduate students will vie for the Excellence in Student Attendance award.

For complete information on the 2014 SEC Symposium, log on to www.secsymposium.com.

SOCIAL MEDIA AND OTHER WEBSITES

About SECU
Using its SECU academic initiative, the Southeastern Conference sponsors, supports and promotes collaborative higher education programs and activities involving administrators, faculty and students at its fourteen member universities. The goals of the SECU initiative include highlighting the endeavors and achievements of SEC faculty and universities; advancing the merit and reputation of SEC universities outside of the traditional SEC region; identifying and preparing future leaders for high-level service in academia; increasing the amount and type of education abroad opportunities available to SEC students; and providing opportunities for collaboration among SEC university personnel.