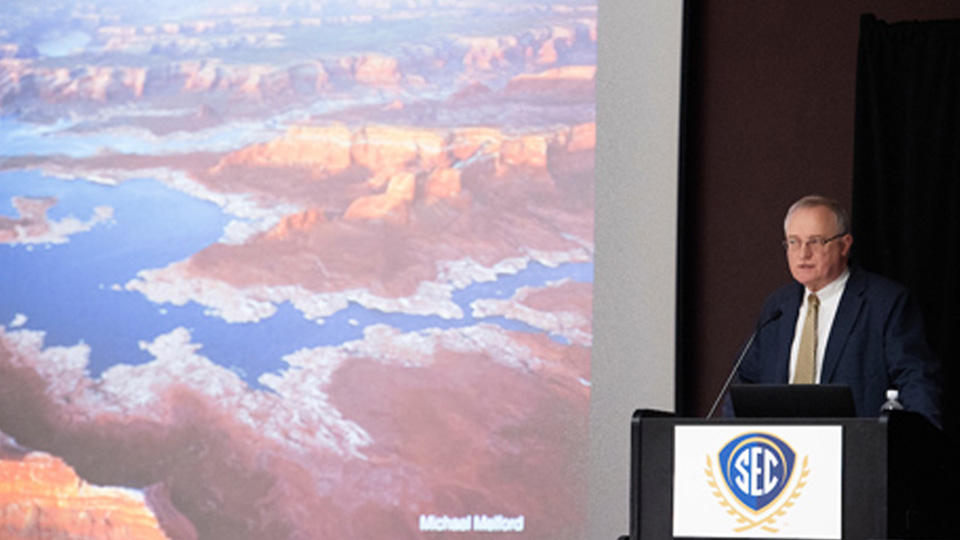 Dennis Dimick provides a keynote address on the opening day of the SEC Academic Conference at Mississippi State University.

“The farm is gone now, and so are [my parents] but it is the platform in which I gained so much interest in these issues,” Dimick said. The conference is focusing on “The Future of Water: Regional Collaboration on Shared Climate, Coastlines, and Watersheds.”

During his career, he has guided creation of several major National Geographic magazine projects, including an April 2010 issue on global freshwater. Additionally, he led a 2011 series called “7 Billion” on the growing global population and the 2014 “Future of Food” series on global food security. In 2004, he orchestrated a 74-page project on climate change called “Global Warning: Bulletins from a Warmer World.”

From women in Kenya who walk miles every day to get water for daily living needs to water powering the modern world, Dimick’s photographs included a wide variety of water visuals to stimulate conference discussion regarding solutions. Representatives from all 14 SEC universities are participating at the event focused on collaborative research.

“These are the kinds of trends that are driving your discussions today,” he said, also asking, “How are we going to manage the resource against demand?”

Dimick said that in 1951 when he was born, global population was 2.5 billion. Projections estimate 9.7 billion by 2050. With increased demand for water come increased challenges, but population isn’t the only concern, he said.

“It’s not just quantity of water—whether there is water—it’s also quality of water,” he said, explaining that “bad water is the root of many human diseases.”

“This brings us all back to the question of food security,” he added. He said agricultural research is needed to adapt to changing conditions and increased needs.

Dimick shared trends of land development and talked about balancing human habitation with the natural world. He said endangered species are a particular concern in the Southeastern U.S.

Among his accomplishments, Dimick co-organized the Aspen Environment Forum from 2008-2012, and he regularly presents lectures on global environment issues. He holds degrees in agriculture and agricultural journalism from Oregon State University and the University of Wisconsin-Madison. For 17 years, he has been a faculty member of the Missouri Photo Workshop and in 2013 received the Sprague Memorial Award from the National Press Photographers Association for outstanding service to photojournalism.