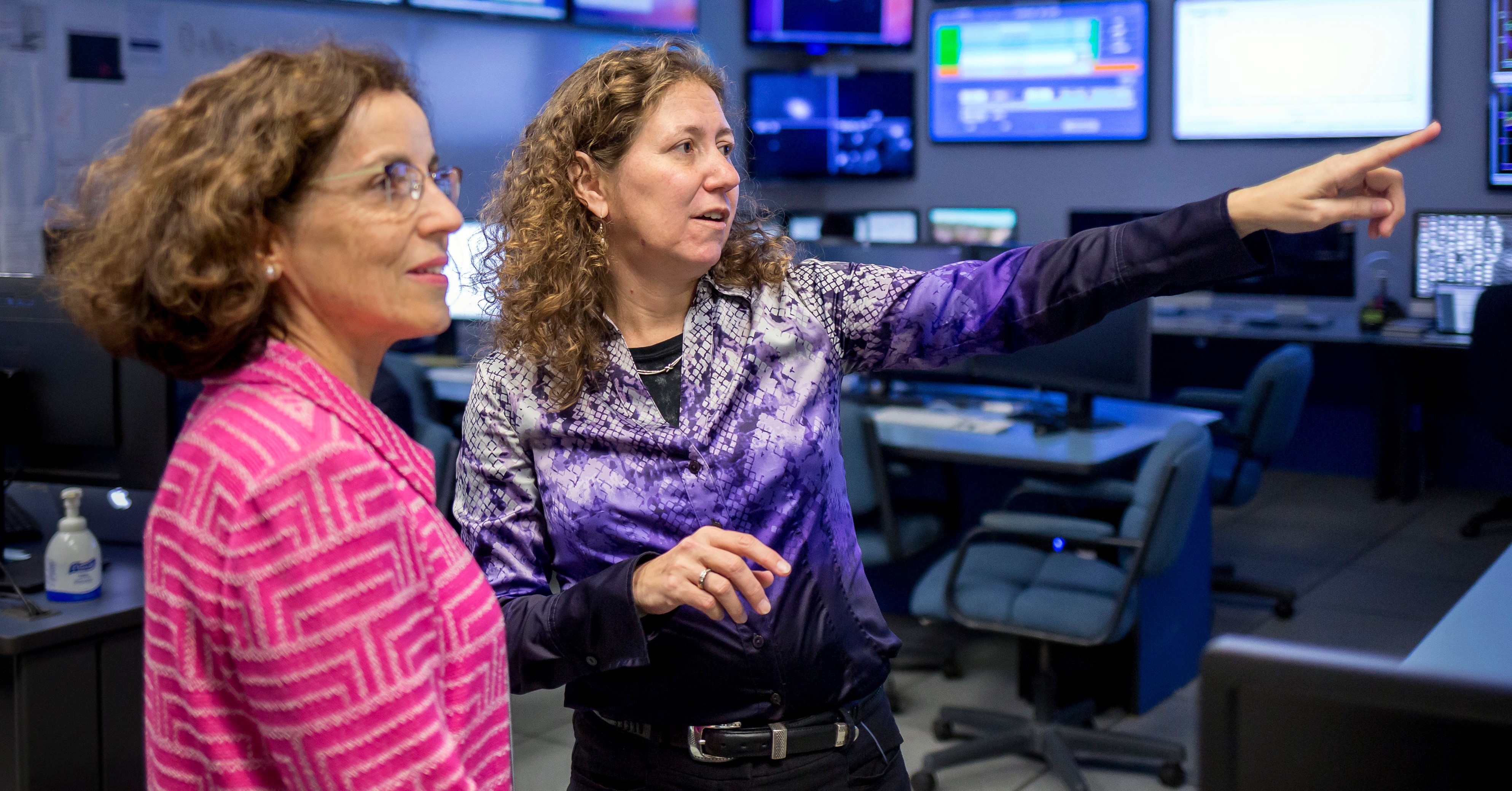 Dr. Gabriela González, right, was named the 2019 SEC Professor of the Year.

If you want to know what gravitational waves are, have a seat with Dr. Gabriela González. She’s a Professor of Physics and Astronomy at Louisiana State University, and she’s also the 2019 SEC Professor of the Year.

This worldwide leader in gravitational wave research has proven It Just Means More by collecting all kinds of awards. To name a few, she received the National Academy of Sciences Award for Scientific Discovery and the Bruno Rossi Prize from the High Energy Astrophysics Division of the American Astronomical Society. She was also named one of the world’s “ten people who mattered” by Nature in 2016, Scientist of the Year by Great Minds in STEM, and one of the top 100 Leading Global Thinkers by Foreign Policy magazine for the LIGO Scientific Collaboration.

What’s LIGO? So glad you asked.

LIGO stands for Laser Interferometer Gravitational-Wave Observatory and it’s the foundation for Dr. González’s success. The program includes more than 1,000 scientists representing 20 nations and is funded by the National Science Foundation. It consists of two highly sensitive instruments: One observatory is in Hanford, Washington, and the other is in Livingston, Louisiana (on LSU property). They operate in unison as a single observatory, and from 2011 to 2017, Dr. González served as the LIGO Scientific Collaboration’s global spokesperson and scientific leader. In 2016, she was one of the scientists at the podium making the worldwide announcement that gravitational waves, or ripples in space and time, had been discovered at the LIGO observatories. She was also in Stockholm in 2017 when LIGO leaders were awarded the Nobel Prize in Physics after proving predictions made by Albert Einstein more than 100 years ago.

“When I went to college in Argentina, I studied different topics, and I discovered this theory of space-time — this theory of relativity by Einstein,” González said. “Then I came to the U.S. to study relativity, and I met a professor who was working on a project to measure space-time. I was helping put together the LIGO observatory in Louisiana, and when they offered me a faculty position at LSU, that was a dream come true.”

Dr. González’s research focuses on LIGO instrument development as well as the reduction and characterization of noise to enhance the laser interferometers’ sensitivity to detect gravitational waves, calibrate the detectors, and analyze data. As LSU President Dr. F. King Alexander puts it, “The caliber of Dr. González’s body of research, combined with her many accomplishments and exceptional leadership, attests to the extremely broad impact she has contributed to her field.”

It’s no wonder SEC Commissioner Greg Sankey said, “She exemplifies all that we expect a faculty member to be in the Southeastern Conference.”

As for those doctoral students and postdoctoral fellows she mentors? They’re soaking up some of the highest-caliber wisdom in that field, which is great, because obviously they have big shoes to fill.

“Being able to conduct research with one of the world’s leading experts in the groundbreaking field of gravitational wave science is an incredible experience. Not only is Dr. González an amazing scientist, but she’s an incredible mentor and teacher,” said Shania Nichols, a doctoral candidate whom Dr. González advises.

If you’re still looking for More, take note: Dr. González also spearheaded a local school outreach initiative that has received more than $1 million for K-12 students in Louisiana. In all, that’s why the SEC is so proud to recognize her with its highest faculty honor. But given Dr. González’s track record, resting on her laurels isn’t part of the game plan. Instead, she’ll continue to break through in a field that boggles even the brightest of minds.