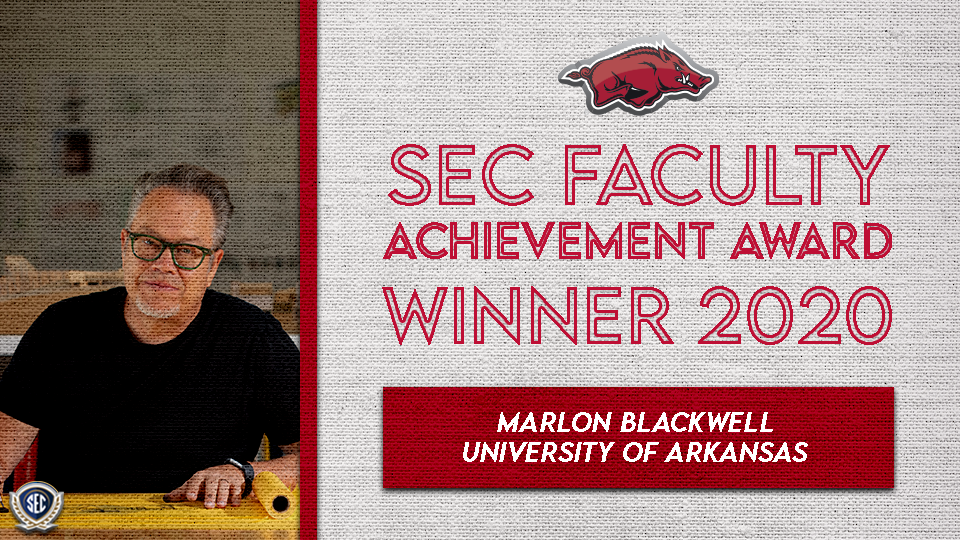 BIRMINGHAM, Ala. – Marlon Blackwell, Distinguished Professor in Architecture in the E. Fay Jones School of Architecture and Design, has been named winner of the 2020 SEC Faculty Achievement Award for the University of Arkansas, the SEC announced Wednesday, April 1.

Prof. Blackwell has been an educator and architect for more than 30 years, and he recently received the 2020 American Institute of Architects Gold Medal, the Institute’s highest honor, recognizing individuals with enduring impacts on theory and practice. He was inducted into the National Academy of Design in 2018 and served for six years as department chair at Arkansas. Co-principal of Marlon Blackwell Architects, Blackwell lectures nationally and internationally, and he continues to serve on design award juries and as a visiting design critic throughout the country.

“Marlon Blackwell is a world-class architect and AIA Gold Medal recipient whose work in top-tier publications and museum, home, office and performance space designs have been seen around the globe,” said Jim Coleman, Provost and Executive Vice Chancellor at the University of Arkansas. “His achievements in practice are only matched by nearly three decades of dedication to excellence in professional undergraduate education.”