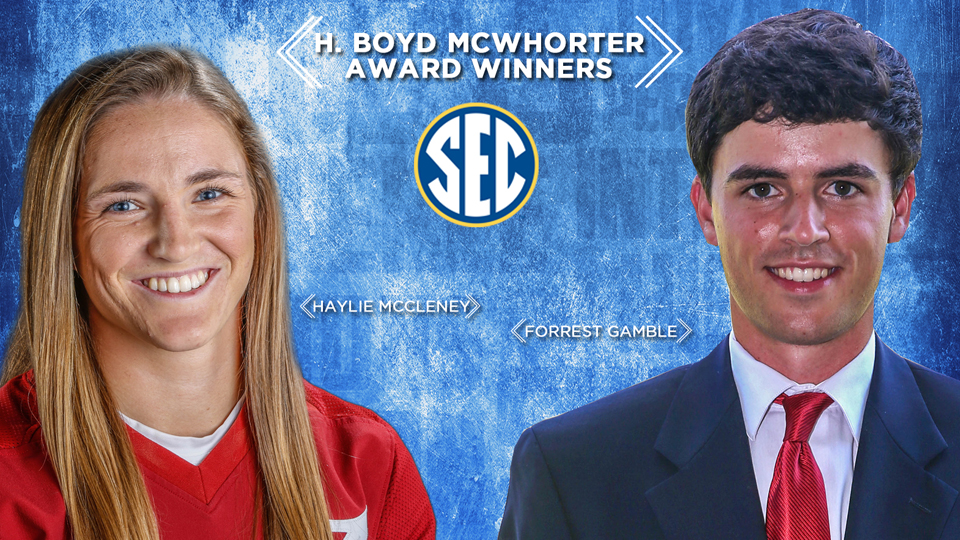 The two were chosen by a committee of Faculty Athletics Representatives from SEC universities and both will receive a $15,000 post-graduate scholarship, provided by AT&T, an SEC Corporate Sponsor, and the Allstate Sugar Bowl.

“Forrest and Haylie are the type of student-athletes who make a commitment to excellence in the classroom and in competition that are representative of the high standards of the Southeastern Conference,” Sankey said.  “Their accomplishments and their character make them ideal choices for the H. Boyd McWhorter Scholar-Athlete Award.”

Gamble, a Physics major with a grade point average of 3.97, was the 2015 SEC Men’s Golf Scholar-Athlete of the Year and a CoSIDA Academic All-American the same year.  He has been named to the Chancellor’s List at Ole Miss every semester during his career with the Rebel golf team.

Gamble finished in the top-ten this year at the FAU Slomin Autism Invitational to lead the Rebels to a first place finish, firing a season-low round of 2-under par 69 in the opening round.  He finished in the top 20 at the Shoal Creek Invitational in his hometown of Birmingham, Alabama last fall and paced the Rebels with two rounds of even-par 72 at the Old Waverly Collegiate Championship this April to help Ole Miss finish second.

He also fired a career-low 66 at the 2015 SEC Championships at Sea Island, Georgia, en route to a tie for an 11th place.  He competed in every tournament his freshman season, earning his first top-five finish at the Querencia Cabo Collegiate in 2013.

On the diamond, McCleney is a three-time All-American (2013-15) and four-time finalist for USA Softball Player of the Year (2013-16) while also earning All-SEC honors three years in a row.  She is just the second player in program history to be named First Team as both an All-American and Academic All-American in the same season.