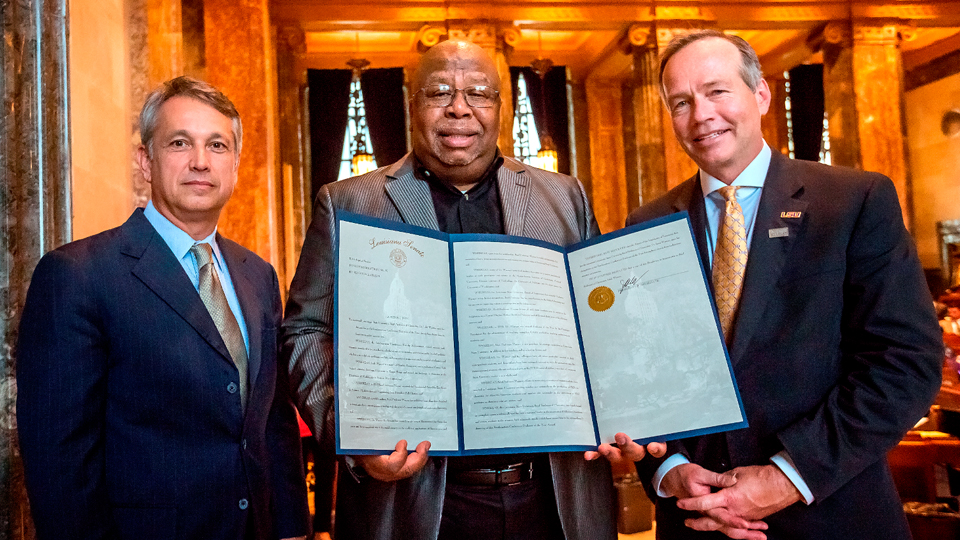 (Left to right) Louisiana Senator Eric LaFleur, Dr. Isiah Warner and LSU President Dr. F. King Alexander pose for a picture during LSU Day at the Louisiana State Capitol in April. Dr. Warner was recognized for being named the 2016 SEC Professor of the Year.

To most people, Dr. Isiah Warner represents cutting-edge research and countless accolades. But to those closest to him, the 2016 SEC Professor of the Year from Louisiana State University is the optimist, visionary, father-figure whose care for students came to define a legendary career.

Melissa Crawford was a freshmen chemistry major at LSU when she met Dr. Warner, who was serving as Chair of the Chemistry Department at the time.

“From the beginning, he was welcoming and he took time out of his schedule to check on all of the chemistry students,” said Crawford. “His door was always open if we needed advice on school or just to talk about life.”

Dr. Warner had received the same kind of guidance as a senior in high school. An English teacher, who he refers to as an impactful figure in his life, suggested he take a summer chemistry program at Southern University in Baton Rouge. At that time, Warner already knew he wanted to study science at Southern, but the Bunkie, LA., native was unsure of the specific area.

“When we contacted Southern, we were told the program was already full,” recalls Warner. “But the chair of the department said if I could pay half of the registration fee, he would allow me to participate.”

Warner’s family was well aware of his passion for math and science, but they did not have the money to pay the program fee. So, his father decided to ask Isiah’s grandfather for help, and knowing his grandson’s abilities and potential, he paid for Isiah to attend the Southern program.

After graduating from Southern and earning a Ph.D. from the University of Washington, Warner worked at Texas A&M University and Emory University before settling at LSU, where he discovered the chemistry department had only graduated six African American Ph.D. students in its history.

Unsatisfied with such outcomes, Dr. Warner wrote a proposal that was funded by the National Science Foundation to start the LA-STEM Research Scholars Program, a multi-faceted and holistic undergraduate training model designed to promote diversity while increasing access to achievement in science, technology, engineering and mathematics (STEM) disciplines. Enrollments at LSU sky-rocketed, and the university became a model for attracting underrepresented groups.

LA-STEM Program participants have received numerous awards, including LSU’s first Gates Cambridge Scholar, which gives students with outstanding intellectual ability the opportunity to study at the University of Cambridge for their postgraduate degree. These accomplishments do not surprise those who have been influenced by Dr. Warner.

Crawford, who currently serves as Program Manager of the LA-STEM Program, describes Dr. Warner as having foresight not only in his research, but also in people.

“Dr. Warner sees potential in everyone he meets,” said Crawford. “There have been numerous students who others would see as sub-par or unable to compete but Dr. Warner was able to identify the student’s strengths and pull the best out of them. I have never met anyone quite like him.”

Gloria Thomas was a graduate student at LSU when she found a broken instrument in Dr. Warner’s research laboratory. Although she was not a member of his research group, Thomas asked about the instrument.

“Time in the lab was very precious and we needed all of the resources available when it was our rotation,” said Thomas. “Dr. Warner said if I could get the machine running again, I could not only use the machine, but I could have it.”

Thomas eventually repaired the machine, and Dr. Warner honored his word by letting her have as much time as she needed with the equipment. She would go on to use a majority of the instrument’s data in her dissertation.

“I think that is a testament to his dedication to student success,” said Thomas. “I wasn’t one of his students and my work wasn’t advancing his research, but he wanted what was best for me, and I continue to see him do that for all students.”

Dr. Warner is the fifth SEC Professor of the Year, an honor which he calls one of the most recognizable of his career.

“I won two national awards from the American Chemical Society, but the award from the SEC is the first to be printed in my hometown newspaper,” laughed Warner. “I have received numerous phone calls from former classmates, students and colleagues. Everyone knows about the Southeastern Conference and recognizes the enormity of this honor.”

Despite the awards and praise, Dr. Warner wants to be thought of most as someone who helped people.

“I once had a former student tell me, ‘You cared about the students as much as you did about the science,’” said Warner. “That is a statement I am very proud of and that’s how I would like to be remembered.”