Professor of the Year Johnson Embraces Ideal of Student-Athletes 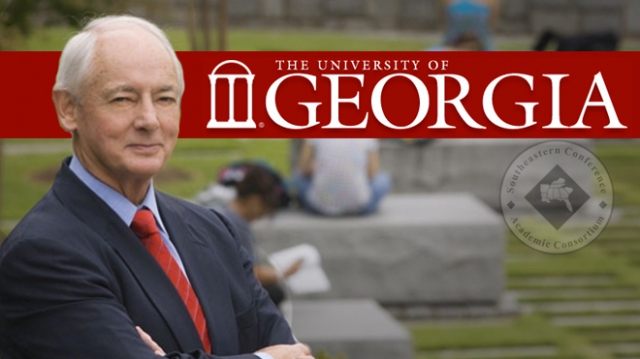 DESTIN, Fla. – The Greeks would be proud of Dr. Loch K. Johnson.

Not only is Johnson the Regents Professor of Public and International Affairs at the University of Georgia, a role that he has performed with such success that he was named the Southeastern Conference’s inaugural Professor of the Year last week at the SEC Spring Meetings in Destin. He also believes that to be successful, his students should meet the Greek ideal of being well rounded.

“I have a dream in which every athlete is a scholar and every scholar is an athlete,” Johnson said. “I don’t expect every athlete to be a Rhodes Scholar, but I do expect them to take their studies seriously and walk away with a degree at the end of their time. As for scholars, they don’t need to be a starting quarterback in the SEC, but they should lead healthy lives based on physical fitness and nutritional eating, making one fit. The Greek ideal that they often wrote about is to have a strong mind and a strong body. That’s what I hope my students will embrace as a goal.”

Johnson himself is quite accomplished and has won numerous awards for his teaching and research. He is a Josiah Meigs Distinguished Teaching Professor, which is the University of Georgia’s highest honor for teaching at the undergraduate and graduate levels. He also is the author of 20 books.

Despite his lengthy resume of accomplishments, Johnson was honored and humbled to earn the SEC’s Professor of the Year honor.

“It’s a fantastic honor because I’m really dedicated to teaching and research, and to be recognized for that is a wonderful pat on the back, especially by such a prestigious organization as the SEC,” Johnson said. “The procedure was fairly intricate. At all 12 campuses, there was a committee of faculty members selected by the provost to choose a faculty member for recognition on their campus. I was astounded enough to win on the University level, I never imagined that I would go on to win overall. I am surprised, grateful and humbled.”

With the honor, the SEC became the only Division I conference within the NCAA to recognize university faculty for their achievements, unrelated to athletics or student-athletes. The SEC provides its Professor of the Year recipient with a $20,000 honorarium.

In addition to his academic work, Johnson also has worked in national government in both the Congress and the Carter and Clinton White Houses. He is an expert on national security issues.

“I’ve tried to go back and forth between academe and the government because I’m really interested in imparting to students how government works and that requires close-up observation,” Johnson said. “I’ve been a staff aide both in the U.S. House and Senate and twice in the White House under Presidents Carter and Clinton. My goal each time was to carefully observe how politics and the three branches of government work and come back to the classroom to let my students know how that corresponds to what they’re reading in their textbooks.

“My field in the government is in the intelligence and national security domain and a lot of that is secretive, so I can only bring back so many observations,” Johnson continued. “I’ve never been in intelligence, I’ve always been in the Congress or White House evaluating the work that officers in our 16 secret agencies are carrying out. Political scientists call that oversight or accountability. My work has been in the domain of accountability in America’s secret agencies.”

Johnson’s path to his current career is not unlike that of so many others. Inspired by teachers and growing up in a U.S. Army family, Johnson developed a deep love for education and government.

“Like a lot of people, I had an inspiring teacher in high school and another in college in the field of international affairs,” Johnson said. “Their lectures were so interesting to me that I decided to go that route. Growing up in a U.S. Army family, I did a lot of travel. That combination of inspiring teachers and seeing the world as a young man directed my career pathway towards the field of international affairs.”

In government, Johnson’s interests were piqued and his expertise refined by those he served, specifically Senator Frank Church of Idaho and Congressman Les Aspin of Wisconsin, who later became the U.S. Secretary of Defense.

“I’ve been lucky to work with people who were smart and well connected to the vision of what America’s future should be,” Johnson said. “Between academe and the government, my work has been based on a desire to have experiences in both and share with my students. The interest in the CIA was fortuitous because I worked for Frank Church as a Congressional fellow early in my career and he was later chairman of the investigative committee on the CIA, and he asked me to be his assistant. My experience has come through academe and research, but also in the halls of the Congress and the White House.”

Because of his experiences, Johnson knows the importance of civic responsibility among all peoples, and he shares that belief with his students.

“I try to tell my students that it’s important to lead lives of consequence and to prepare themselves by rigorous study and a rigorous understanding of issues,” Johnson said. “I want my students to learn as much as they can about facts and theories of politics. It is important in a democracy that you have a sense of civic virtue, whether that’s in simply voting or being involved on the school board or getting involved in the federal, state or local government. I try to remind them that this is a democracy and they all need to be engaged.”

Engagement is just one of a handful of components that are part of the well-rounded person that Johnson envisions his students being. He knows participation in athletics are equally important.

“I think that when one goes to college or university, it is great to have the full collegiate experience, not simply going to classes, as pivotal as that is,” Johnson said. “It is important to have debating societies and drama and guest speakers and robust programs. It is fun to go to athletic events. I can think of no better way that students can sharpen their leadership skills than to be on an athletic team. It doesn’t just matter who can run 100 meters the fastest or carry the pigskin 40 yards through heavy traffic, it’s about character building and leadership building. We also have a rich intramural program at Georgia. There are a lot of people involved in sports.”

In fact, according to Johnson, some of the best pupils over the years have been student-athletes. At Georgia, for example, this year’s McWhorter Scholar-Athlete of the Year recipient was swimmer Wendy Trott.

“I think there is a mythology out there that if you’re an athlete, you’re not going to be a very good student, but that’s not what the record indicates,” Johnson said. “When you’re in a sports program, you have to be self-disciplined and you have to be very good at time management. Being good at team play and working with others are all skills that are highly valuable when it comes to the academic side of the University. When I think about my students who have been on one sports team or another, they are often the most punctual in being in class, they take the best notes and they’re really well organized because they know their day is crowded with other responsibilities, so they’re going to get it right the first time.”

Johnson has four key principles that he employs every day he walks into the classroom:

Those four principles have helped Johnson become one of the nation’s elite professors. He is thankful for the opportunity to teach at the University of Georgia, where students are a top priority.

“Georgia is very student oriented,” Johnson said. “Even though it’s a large institution, we pride ourselves on taking teaching seriously. I think we have the best provost in the United States in Jere Morehead. He is so inspiring and dedicated to helping create a wonderful working environment for faculty and students.”

Considering Johnson’s ideals, he shares a love of both athletics and academics.

“It is particularly gratifying to win an award from the SEC, an athletic conference,” Johnson said. “I’ve always been deeply involved in sports. In high school, I played all the major sports and in college, I was on the rugby and track teams. I’ve always tried to have a blend of athletics and academics. That’s what I try to get my students to practice as well. To earn this award from an athletic organization is especially thrilling.”