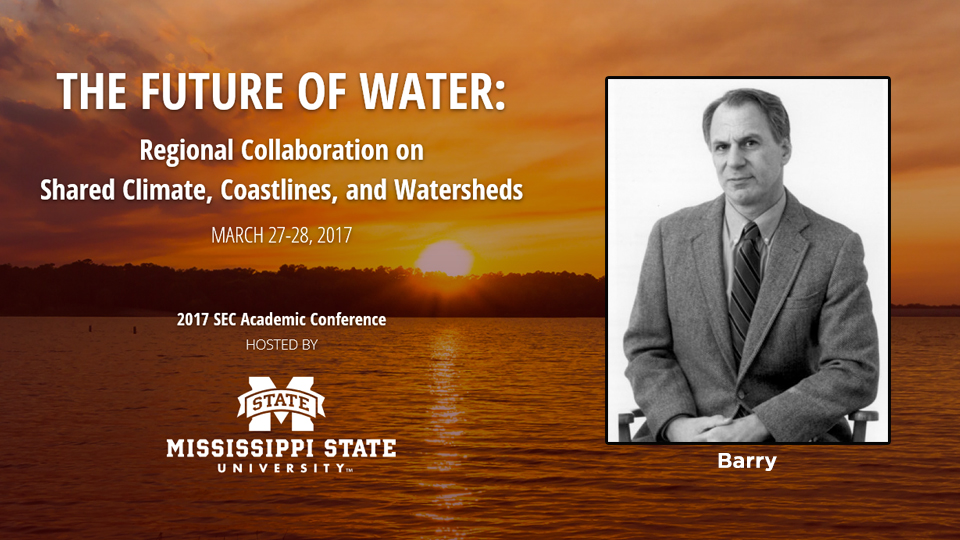 STARKVILLE, Miss.—John M. Barry, the best-selling and award-winning Louisiana author, is the latest keynote speaker to be announced for the Southeastern Conference’s spotlight on collaborative research.

Mississippi State is the 2017 host for the SEC event, which will take place March 27 and 28 at The Mill at MSU Conference Center.

“The Future of Water: Regional Collaboration on Shared Climate, Coastlines and Watersheds” is the theme of this year’s SEC Academic Conference. For complete conference details and registration, visit www.secconference.msstate.edu.

“The opportunity for those attending the SEC Academic Conference to interact with eminent scholars and thinkers like John Barry, Dennis Dimick, and Jay Famiglietti demonstrates the commitment of Mississippi State to present a meaningful and forward-looking exercise in collaborative research into a globally relevant topic,” said MSU President Mark E. Keenum.

Barry’s 1998 book, “Rising Tide: The Great Mississippi Flood of 1927 and How It Changed America,” won the Society of American Historians’ prestigious Francis Parkman Prize for the year’s best book of American history and was a continuing inclusion on the New York Times’ non-fiction best-seller list.

A New Orleans resident, he received a similar major honor from the National Academies of Science for “The Great Influenza,” an in-depth study of the 1918 pandemic that infected 500 million. A Times reviewer praised the 2005 book as “the most panoramic history of the subject.”

Beyond the successful career of an author, Barry was an adviser to the Bush and Obama presidential administrations, as well as the United Nations and World Health Organization, in his varied areas of research expertise. In addition to being the only non-scientist on the federal Infectious Disease Board of Experts, he serves on advisory panels at the Massachusetts Institute of Technology’s Center for Engineering Systems Fundamentals and Johns Hopkins University’s Bloomberg School of Public Health.

“Roger Williams and The Creation of the American Soul: Church, State, and the Birth of Liberty” is Barry’s latest book. A 2012 Penguin Books release, it won the New England Society Book Award and was a finalist for the Los Angeles Times Book Prize. For additional biographical information, visit www.johnmbarry.com.

MSU officials making preparations for the March conference said increased climate variability and water demand are bringing water issues to the forefront. Drought, declines in aquifers used for irrigation, and sea-level rise are among core topics of interest. The conference is designed to stimulate communication and collaboration toward sustainable and resilient water resource management in the Southeast, with overarching themes to include shared inland waters and aquifers, coastlines, climate and regional policy.

The SEC Academic Conference represents an expanded slate of academic programming currently supported by the Southeastern Conference. The on-campus event is expected to showcase SEC university research in areas of critical importance within the region and around the nation. SECU is the academic initiative of the SEC, and it serves as the primary mechanism through which the collaborative academic endeavors and achievements of SEC universities are supported and advanced.