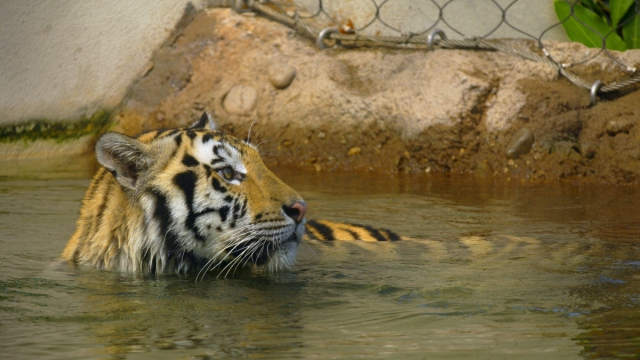 LSU’s Mike the Tiger is the only tiger living on a college campus in the United States.

BATON ROUGE, La. – Two decades ago, Dr. David G. Baker was unaware of the importance of collegiate mascots and the fervor surrounding Southeastern Conference (SEC) athletics. Today, he is responsible for the care of the only tiger living on a college campus in the United States.

Baker is Director of the Division of Laboratory Animal Medicine and Attending Veterinarian for Louisiana State University (LSU). His job description includes serving as the personal veterinarian for Mike the Tiger, LSU’s Bengal tiger mascot.

“I’m responsible for all aspects of his care,” Baker said. “I hire and train a team of veterinarian students – two, third or fourth-year students – who care for him on a day-to-day basis, and I handle all of his medical treatment, with assistance as needed.”

Unrelated to his responsibilities with Mike the Tiger, last year Baker was selected as a participant for the 2012-2013 edition of the SEC’s Academic Leadership Development Program, which is a part of SECU, the conference’s academic initiative.

The SEC ALDP seeks to identify, prepare and advance academic leaders for roles within SEC institutions and beyond. It includes two components – a university-level development program designed by each institution for its own participants and two, three-day SEC-wide workshops held on specified campuses for all program participants.

“Dr. Baker’s work with Mike the Tiger is one example of how intercollegiate athletics positively intersects with and bolsters academics on any given SEC campus,” SECU Executive Director Torie Johnson said. “To hundreds of thousands of LSU sports fans, he’s the person who cares for their beloved mascot. To the students he has mentored and trained, he is the person providing a virtually unmatched opportunity in veterinary medicine.”

The SEC ALDP was something Baker said was beneficial for his career as an academic leader.

“It was a good experience,” Baker said. “We [LSU participants] met every week and visited with a different administrator at LSU. We learned about how universities operate and, specifically, how LSU functions.”

Baker, who earned four degrees, including a DVM and Ph.D. from the University of California-Davis, accepted a position at LSU in 1996 with little understanding of how important his new position would be publically.

“At the time, I didn’t even know LSU had a live tiger,” Baker said. “Actually, when I went to vet school, I planned to become an equine practitioner, but life has a way of changing courses.”

Baker quickly learned the importance of Mike the Tiger to the LSU community and fan base.

“We’ve had a Tiger here for over 75 years, so there’s a lot of history,” Baker said. “He’s a part of the culture down here. I’ve learned a lot about the importance and role of symbols in a university community because Mike is a symbol. He’s more than that because he evokes very strong passions from people here.”

Baker is the only veterinarian who is responsible for the direct and full-time care of a live mascot on a campus in the SEC. He has enjoyed the relationships he has built with the other mascot caretakers across the conference, many of whom have reached out over the years to Baker, seeking his expertise.

“There are certain questions that come up that need veterinary input and occasionally they will call,” Baker said. “I interact with them at LSU football games and have found them to be a really great group of people. They are highly conscientious and take their roles as caretakers for live mascots very seriously.”

Caring for Mike the Tiger is certainly the most visible part of Baker’s job, one that requires him to interact regularly with the media and the public. His favorite responsibility, however, involves the students that he works with in the classroom and the laboratory.

“I’ve had nine teams of students work for me or care for Mike under my supervision,” Baker said. “Mentoring them and watching them grow into professors is the most rewarding aspect of my position.”