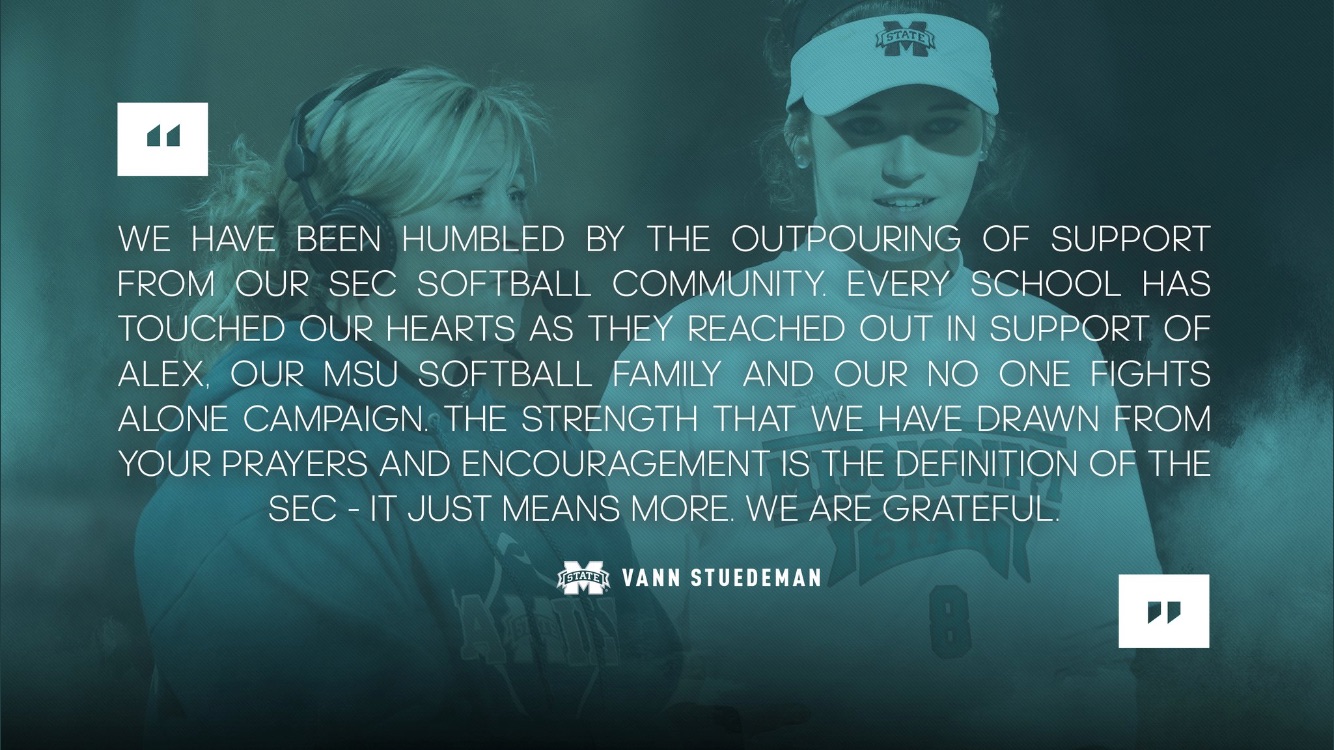 Jake Bentley of the South Carolina football team and the collective group of the SEC softball teams are recipients of the 11th SEC Sportsmanship Awards.

“The stories of Jake Bentley and the SEC softball programs are stories of sportsmanship and compassion that are common across the SEC,” said Commissioner Greg Sankey. “Empathy for others, even when they are your opponent in competition, is the definition of sportsmanship, and I am proud of this year’s recipients because they set a standard that is true to the values of the Southeastern Conference.”

Jake Bentley, a junior quarterback for the South Carolina football team, earned the men’s SEC Sportsmanship Award for the compassion he showed a fellow but opposing quarterback in a game at Tennessee.

In a tight game in Knoxville, South Carolina took a 15-9 lead with 1:13 left to play. Tennessee freshman quarterback Jarrett Guarantano led the Volunteers to first and goal at the two-yard line with nine seconds to play, but threw three incomplete passes to end the game. As the Gamecocks celebrated, Guarantano sat dejectedly near the sideline. Bentley jogged toward him, bending down to offer encouragement to the first-year quarterback after a difficult finish. Bentley told him “it’s just one game” and he reinforced that Guarantano had played well. Bentley told Guarantano that he has a long career ahead of him as a quarterback in the SEC and he encouraged him to “keep his head up and move forward.”

“Jake is a great ambassador for the team and the Athletics Department, consistently representing South Carolina at events and in the media with poise, personality and grace in victory and defeat,” said South Carolina Athletics Director Ray Tanner. “After each game, he makes it a point to seek out the other team’s quarterback, to share specific conversation among his counterparts around the SEC as they share a brotherhood at one of the most scrutinized positions on the field.”

The SEC softball teams were named winners of the women’s SEC Sportsmanship Award for their show of support for Mississippi State student-athlete Alex Wilcox who is currently undergoing treatments for ovarian cancer.

Following Mississippi State announcing its “No One Fights Alone” campaign to bring awareness to ovarian cancer and Alex Wilcox’s fight, every softball team in the SEC developed a method for displaying its support throughout the season. Teams have honored Wilcox with moments of silence to honor those fighting the disease, by showing a video about Wilcox produced by Mississippi State, or by wearing teal uniforms, batting practice tops and ribbons. Some teams have displayed Wilcox’s name on their helmets and pregame gear, or have worn bracelets with Wilcox’s name and “No One Fights Alone” written across them.

“From sending encouraging videos, letters and social media posts to hanging posters in dugouts, every team in the SEC has shown unwavering and selfless support to a very special young woman and has brought MSU’s season rallying cry to life that truly no one fights alone,” said Mississippi State Athletics Director John Cohen.

“We have been humbled by the outpouring of support from our SEC softball community,” said Mississippi State head softball coach Vann Stuedeman. “Every school touched our hearts as they reached out in support of Alex, our MSU softball family and our ‘No One Fights Alone Campaign.’ The strength that we have drawn from your prayers and encouragement is the definition of the SEC – It Just Means More.  We are grateful.”

Below is a list of all-time SEC Sportsmanship Award recipients: