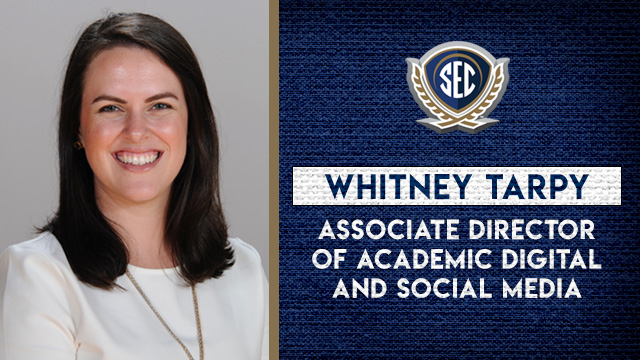 Southeastern Conference Commissioner Greg Sankey announced the addition of Whitney Tarpy to the SEC staff as Associate Director of Academic Digital and Social Media on Thursday.

Tarpy brings more than a decade of communications experience in higher education to the SEC’s academic relations area, both in academics and athletics. In her role at the SEC, she will lead all academic social media and digital efforts, including content development and strategic initiatives that highlight the accomplishments and impact of SEC member universities.

In addition, Tarpy will serve as liaison to the SEC’s academic social media managers and oversee the SEC’s academic website and brand management. She will work closely with SEC universities to help publicize a range of academic SEC programs and events.

“We are thrilled to welcome Whitney to the SEC staff as a member of our academic relations team,” said Dr. Torie A. Johnson, SEC Associate Commissioner for Academic Relations. “She brings a wealth of experience to the role, and her unique perspective as a former athletics communicator will only help as we elevate our academic messaging strategy.”

Tarpy recently served as the Manager of Marketing and Communications at the University of Mississippi School of Pharmacy. She helped promote its nationally ranked degree programs as well as globally recognized research and leadership through digital, print and media relations.

Prior to that, she worked in sports information at the University of Evansville, Western Kentucky University and the University of Georgia. Tarpy implemented communications plans for each of her primary sports that included leading the teams’ websites and social media presence.

Tarpy earned her bachelor’s degree in Journalism from Ole Miss and master’s degree with an emphasis in Sport Management from UGA. As a student and graduate assistant in those respective athletic departments, she volunteered at numerous SEC tournament, championship and media events.