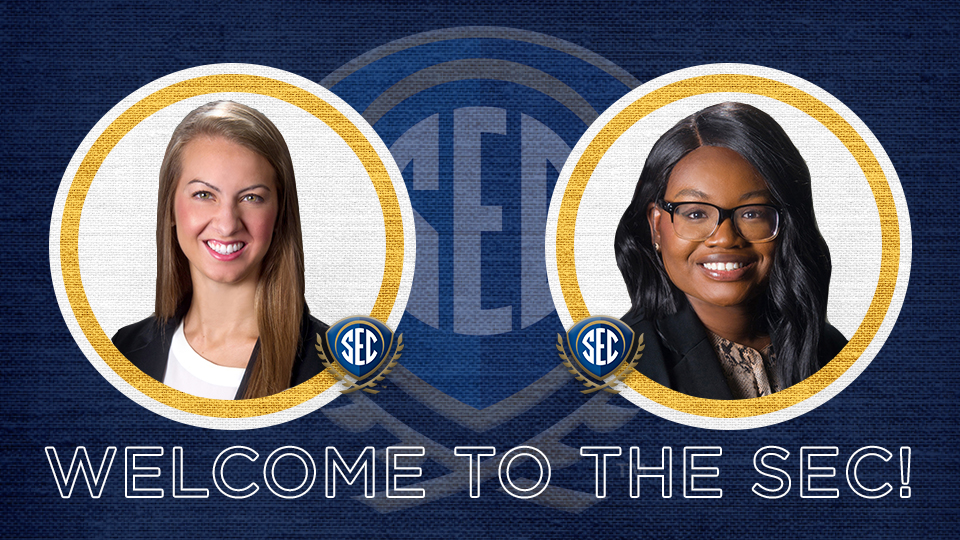 Taylor earned her bachelor’s degree in journalism from the University of Memphis and her master’s degree in higher education leadership from Mercer University. She previously served as a Senior Admissions Counselor at the University of Alabama and in various areas across the campus spectrum, including fundraising and career services at Memphis, and fraternity and sorority life at Mercer. She was also editorial associate at Southern Bride Magazine where she created, wrote and edited content for social and digital assets. As the Assistant Director of SEC Academic Relations, Taylor will provide both content development and communications management of programs designed to highlight the full range of academic and intercollegiate athletic accomplishments of SEC member universities.

Thomas moves to the SEC from Troy University, where he worked as a technician in the Troy telecommunications department and as a graduate assistant in the athletic department. A football student-athlete at Troy and Alabama A&M University, Thomas earned his bachelor’s degree in hospitality, sport and tourism management in 2016 and his master’s degree in sport and fitness management from Troy in 2019.  In his role as video technician for the SEC, Thomas will provide support for all aspects of the SEC’s video operations program.

Preston is a former women’s tennis student-athlete at Liberty University, where she was a two-time team captain and the program record holder in both singles and doubles.  She later served as a student assistant coach.  Preston earned her bachelor’s degree in digital marketing and advertising in 2018 and her MBA in 2019, both from Liberty. She joins the SEC staff with experience in event coordination, marketing and graphics design, including multiple internships in those areas while also serving as a volunteer for the 2019 SEC Women’s Basketball Tournament. In her role with the SEC, she will provide support for a variety of academic programs and activities.

Cosper was a three-year starter on the University of Arkansas women’s basketball team from 2016-2018.  She assisted in the Arkansas athletics communications department and served as an intern with the Razorbacks’ marketing department. Cosper earned her bachelor’s degree in communications from Arkansas in 2017 and is on track to earn her master’s degree in December 2019. Cosper will provide support in the areas of Student-Athlete Engagement and Competition. She is the first intern hired by the Conference as part of a reconstituted SEC internship program.