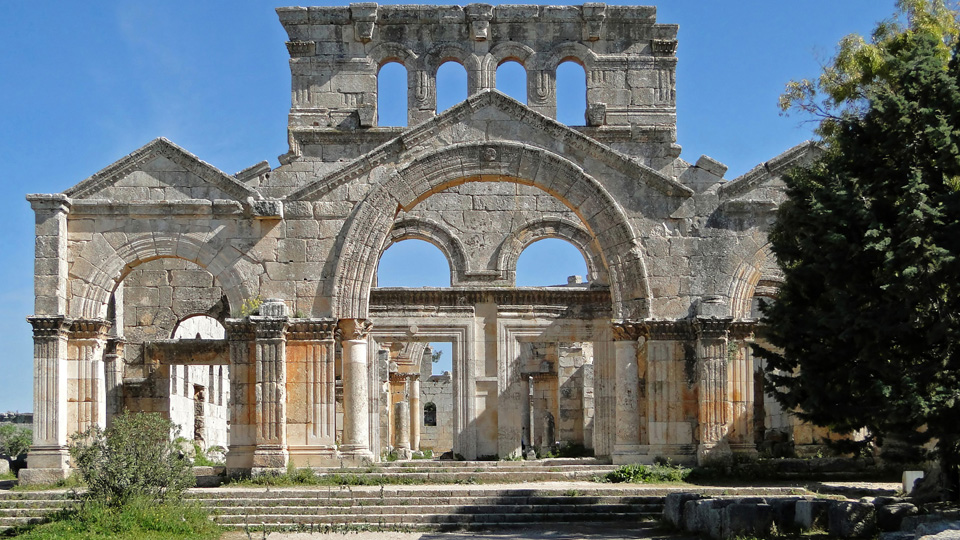 The south facade of Church of Saint Simeon Stylites in Syria

Throughout the course of history, civilizations have sometimes fallen when faced with political or religious opposition, or due to internal divisions. When the population of the people within those civilizations starts to dwindle, so does the culture, traditions and language they have possessed for generations. But faculty from two SEC universities are working to prevent that from happening to one Middle Eastern culture that dates back more than 1,500 years.

Dr. David Michelson, Assistant Professor of the History of Christianity at Vanderbilt University, and Dr. Daniel Schwartz, Assistant Professor of History at Texas A&M University, recently participated in the SEC Faculty Travel Program to work on a grant application for the National Endowment for the Humanities (NEH). The project, which later received funding from the NEH, called for support of a digital humanities collection of Syriac literature.

According to Dr. Michelson, Syriac is one of many minority cultures in the Middle East that has a long and rich history. But due to their status as a minority culture in the region, they aren’t well-known in the Western world. The professors want to harness digital tools to reproduce Syriac documents that are currently available, and ones yet to be discovered, in an innovative way.

Syriac, as defined on the digital collection’s website, is a dialect of Aramaic that originally developed in the kingdom of Edessa (modern Urfa in Turkey), beginning approximately in the first century of the common era. The language flourished in the Persian and Roman Empires, and at its peak, text in Syriac comprised the third largest surviving collection of literature (after Greek and Latin) from the period of Late Antiquity.

“The process of writing an application to the NEH is complex,” said Dr. Schwartz. “The SEC Faculty Travel Program allowed us to sit down for a week in person, as opposed to conference calls or Skype, and discuss project priorities and craft a compelling application.”

Although Dr. Michelson and Dr. Schwartz both specialize in digital humanities, Texas A&M already had an established digital scholarship center, which they used to enhance the digital tools needed for the project.

Dr. Michelson and Dr. Schwartz’s goal is to create a digital infrastructure that allows scholars to contribute and build the collection of Syriac documents over time. Other initiatives include technological enhancements that will permit submissions to be reviewed by editors and creating a handbook and collection of images of documents. Aside from the academic work, both feel a strong sense of urgency to protect Syriac’s place in history.

“In March, the U.S. State Department claimed that Syriac was facing a cultural genocide,” said Dr. Michelson. “We definitely want to underscore that the support from the SEC and NEH is helping us preserve this part of Middle Eastern culture.”

The SEC Faculty Travel Program is part of SECU, the academic initiative of the Southeastern Conference. SECU serves as the primary mechanism through which the collaborative academic endeavors and achievements of SEC universities are promoted and advanced.

To learn more about the project and Syriac, visit www.syriaca.org.