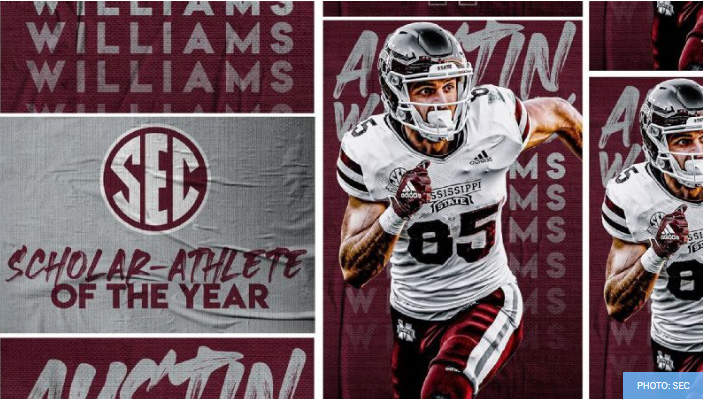 ATLANTA, Ga. – Mississippi State senior wide receiver Austin Williams has been named the SEC Football Scholar-Athlete of the Year by a vote of the league’s head coaches, it was announced Thursday.

Williams is a two-time first-team Academic All-American and has posted a 4.0 cumulative GPA during his time at Mississippi State. He is currently working on his third degree. He was previously selected as a member of the 2022 NFF National Scholar-Athlete Class and is a finalist for the William V. Campbell Trophy, which is college football’s premier scholar-athlete award. Williams earlier this year was named the 2021-22 SEC H. Boyd McWhorter Scholar-Athlete of the Year, the highest honor an SEC athlete can earn in any sport.

A native of Ocean Springs, Miss., Williams has 32 receptions for 269 yards and five touchdowns this season. He is also ranked second for the lowest drop rate of any active SEC wide receiver with a minimum of 100 targets since 2019 (2.0 percent).

Williams is the first Mississippi State student-athlete to earn SEC Football Scholar-Athlete of the Year honors since the award’s inception in 2003. He was named to the SEC Football Community Service Team on Wednesday.