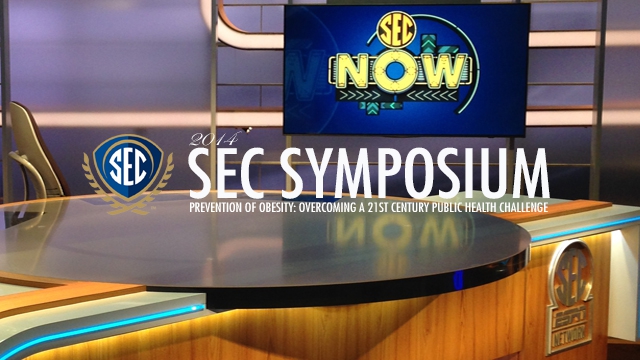 Entitled Prevention of Obesity: Overcoming a 21st Century Public Health Challenge, the second SEC Symposium will take place September 21-23 at the Hyatt Regency Atlanta. This annual academic conference-type event is designed to address a significant scholarly issue by utilizing the range of disciplinary strengths of the SEC’s 14 member universities.

“We are pleased that the SEC Network, through its digital SEC Network+ platform, will provide coverage of this year’s SEC Symposium,” said Charlie Hussey, Associate Commissioner for SEC Network Relations. “In addition to the more than 550 exclusive, live athletic events planned for SEC Network+, this SEC Symposium coverage is yet another way to showcase the SEC by promoting the academic and research accomplishments of our conference institutions.”

SEC Network + is the digital platform of the SEC Network, which can be accessed at SECNetwork.com or on the WatchESPN mobile and tablet applications to customers who receive the SEC Network through their cable, satellite or telco provider.

“The commitment from the SEC Network raises the exposure of the SEC Symposium to a new level,” said Torie Johnson, Executive Director of SECU, the SEC’s academic initiative. “In committing time, talent and resources to covering this unique event, the SEC Network, along with the Conference’s leadership, is making a strong statement about the importance of telling the entire story of the Southeastern Conference and its institutions.”