SEC Professor of the Year McSween Is Living Childhood Dream 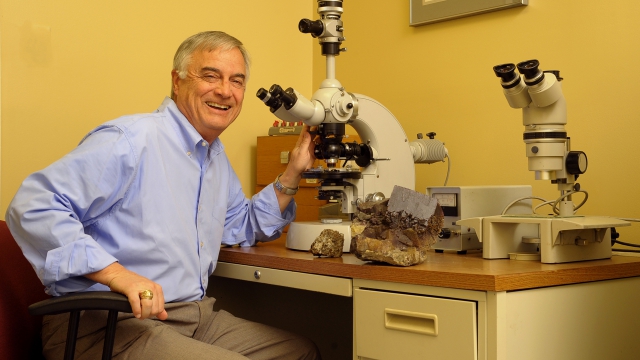 DESTIN, Fla. – Timing, they say, is everything and, in the case of Dr. Harry “Hap” McSween, timing has played a significant role in defining his life and career path.

McSween, Chancellor’s Professor and Distinguished Professor of Earth and Planetary Sciences at the University of Tennessee, Knoxville, will be recognized on Thursday at the Southeastern Conference Spring Meetings in Destin, Fla., as the 2013 SEC Professor of the Year.

In its second year of existence, the SEC Professor of the Year Award goes to one SEC faculty member whose record in research and scholarship places him or her among the elite in higher education.

McSween, who has won a number of national and international awards, is arguably the world’s foremost expert on the composition of Mars and has long been funded by NASA for research on meteorites. His influence is so renowned that he even has an asteroid – 5223 McSween – named in his honor by the International Astronomical Union.

Still, McSween remains humble. In his view, he is nothing more than a man living his lifelong dream.

Growing up in Clinton, S.C., Hap developed an early interest in collecting minerals and quickly devoted himself to learning everything he could about his hobby and, later, the related field of geology.

“I had a couple of friends who were collecting minerals and they got me interested in it,” McSween said by telephone Tuesday from his office in Knoxville. “I had an uncle in New York who was a mineral collector and he heard I was interested in what he did. He started sending me little packages of minerals every couple of months.

“He was smart enough to send me a little book on minerals that got me thinking scientifically,” he continued. “They weren’t just interesting crystal forms and pretty colors; he helped me understand what they meant.”

McSween attended The Citadel, a military university in Charleston, which did not offer a major in geology. Instead, he majored in chemistry and later began a commission in the Air Force before having his passion re-energized by the Space Age and the accompanying Apollo missions.

“I remember in pilot training watching the first lunar landing and the first astronauts walk on the moon,” he said. “I realized, ‘Hey, they’re collecting rocks.’ I started paying attention while I was in the Air Force to what was happening in the Apollo program.”

McSween would go on to earn an M.S. in geology from the University of Georgia and a Ph.D. from Harvard University.

In 1977, having just recently received his doctoral degree, McSween introduced research findings that drew more than a few eyebrows.

“I was trying to find a way to occupy my summer before I came to UT as a new faculty member,” he said. “Another graduate student and I started working on an obscure class of meteorites that no one really paid attention to. After spending our summer studying them, we came to the conclusion that they might be pieces of Mars. That was a really radical idea at the time. We basically got laughed out of the room.”

That discovery was the first of many McSween made and one that would change the course of his work. NASA’s eventual confirmation of the theory helped him get involved in Mars Pathfinder missions in the 1990s and other opportunities with NASA.

“Mars Pathfinder in 1996 was the first time we were going to have the opportunity to analyze rocks on Mars,” McSween said. “The small team realized they didn’t have anyone who knew anything about Mars rocks. Someone said, ‘How about Hap McSween? He thinks he does.’ I was invited to participate.”

At about the time McSween was entering the field of planetary sciences, a paradigm shift was happening in space exploration that was a perfect fit for his background.

“I live in a geology department and the most interesting thing is that over the past 30 years or so, over my career, these space craft missions have transformed the planets from astronomical objects into geological objects,” McSween said. “That has been a really substantial shift of scientific real estate into the field of geology.”

That shift has led to a life’s work that not only includes the research component and his involvement with NASA, but also his role as a teacher to University of Tennessee students.

“I love the research, but I have a number of colleagues who are at NASA research institutions rather than being at universities,” McSween said. “I think they have exciting careers, but there is something magical about being able to involve students in your research.

“I honestly think I have learned more from my students than I have taught them,” he continued. “After a long career, you worry about running out of new ideas before you run out of career but, with students, there is no danger of that. They just keep stimulating you with these off-the-wall questions that really aren’t so off-the-wall. That’s one of the beauties of a research university, which all of the SEC institutions are, research and teaching go hand-in-hand.”

Planetary sciences are just that, a science. But McSween impresses upon his students that creativity is just as important in science as in other fields.

“I really encourage them to be as creative as possible,” he said. “Science isn’t this dull, go-in-a-laboratory-and-do-experiments-that-nobody-cares-about thing; it’s the ultimate act of creativity. You have to be able to think outside the box to properly interpret the results you have.”

In turn, McSween’s students seem to appreciate his instruction, naming him the University of Tennessee Department of Earth and Planetary Sciences best teacher six times. His colleagues equally enjoy working with McSween.

“Hap’s the real thing,” said John Zomchick, Vice Provost for Faculty Affairs, who worked for McSween during his time as Interim Dean of Arts and Sciences. “It’s hard to capture his commitment to UT, to higher education and science without sounding over the top. I don’t know that I’ve met a better person in my professional circles.”

McSween has come a long way from the boy collecting minerals in rural South Carolina, but that passion has driven a career that has spanned four decades and has resulted in significant research.

And as for what McSween will do when his career comes to a close … well, that won’t be happening any time soon.

“I’ve reached the age where most of my college friends are retiring and talking about what they’re going to do next,” McSween said. “I started thinking ‘Are you people crazy?’ I’m having such a great time. I feel like I’m at the top of my game and I’m enjoying it immensely.”