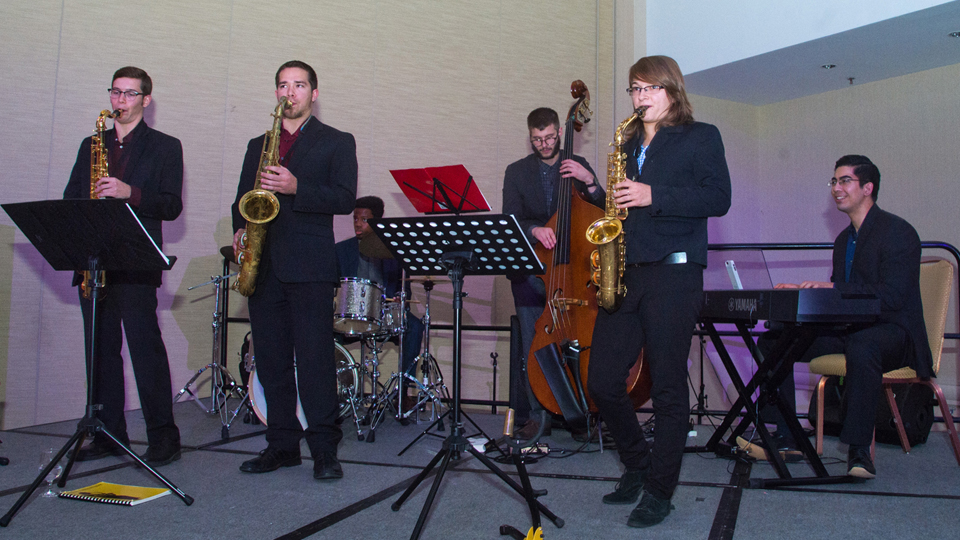 The SEC Student Music Ensemble performs during the 2016 SEC Legends Dinner in Atlanta.

The 2017 SEC Football Championship weekend will feature the return of the SEC Student Music Ensemble. Six SEC students will comprise a jazz combo that will perform Friday night at the SEC Legends Dinner presented by AT&T and Saturday at the SEC Pregame Hospitality Party.

“The SEC Student Music Ensemble is a great opportunity for student musicians to get to know their counterparts at other SEC universities,” said David D’Angelo, Lecturer of Jazz Studies at the University of Georgia and ensemble director. “Since time is limited, students have to quickly learn how to function at a high level with new players in different surroundings.”

Students were nominated by their universities for demonstrating award-winning competence in a range of music genres. The ensemble’s performances throughout the weekend will focus on jazz music.

“Being selected to represent my university means the world to me,” said the University of Mississippi’s Lazarrus Miller. “I’m excited to see how great of a product we can put together since we have never met.”

Aside from performing, students will have the opportunity to attend the Dr Pepper SEC FanFare and the SEC Football Championship Game at Mercedes-Benz Stadium. The musicians will be recognized for their efforts following their performance at the SEC Legends Dinner presented by AT&T and during Saturday’s game.

“The students know they are not only representing their universities, but also the music programs at all SEC universities,” said D’Angelo.

Below are the members of the 2017 SEC Student Music Ensemble.