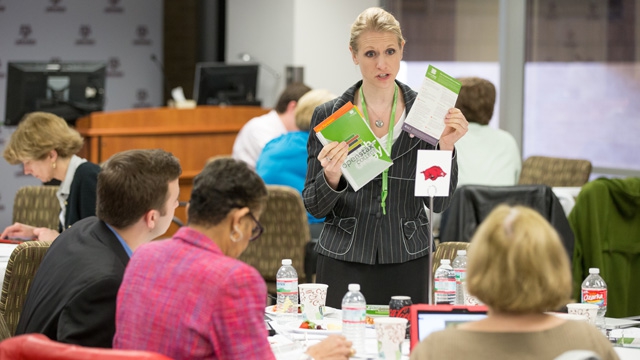 Students and library staff from SEC universities met at Texas A&M University recently to learn, collaborate and form strategies that provide open access and open educational resources on their campuses. The event was supported in part by the first SEC Academic Collaboration Award.

The workshop, entitled Developing Partnerships to Advance Open Access Initiatives at SEC Universities, gave participants the opportunity to hear from nationally-recognized experts, work with facilitators and create plans for pushing openness in research and resources through student government action.

“The groups involved in the workshop were very different,” said Hallie Thompson, a graduate student from the University of Missouri. “But the different perspectives made the conversations very useful for future goals.”

According to a 2014 study by the Student Public Interest Research Group, the average cost of textbooks is more than $1,200 per year, which makes access to resources a trending topic in higher education.

“I’m excited to see the student government groups and libraries, who haven’t had much conversation in the past, come together and form connections that will lead to new opportunities and ideas,” said Dr. Bruce Herbert, Director of Scholarly Communications at the Texas A&M University Libraries. According to Dr. Herbert, the workshop was designed to give the universities time to create a plan because experience has shown they are far more likely to continue to work once they return home.

Keynote speakers included Heather Joseph, Executive Director of the Scholarly Publishing and Academic Resources Coalition (SPARC); Ada Emmett, Head of the Office of Scholarly Communication and Copyright at the University of Kansas, who was key in creating one of the first open access mandates at an American university; and Nicole Finkbeiner, Associate Director of Institutional Relations at Openstax College, a nonprofit organization working to provide open access textbooks. Participants also heard from a panel that included Texas A&M Provost Dr. Karan Watson.

“The next steps may seem simple, but it is important for the universities to write, distribute and pass both the open educational resources and open access student government legislation that was discussed,” said Thompson. “We will have a powerful tool for communication with policy makers at all levels once a consensus plan of action is formed among the institutions.”

The SEC Academic Collaboration Award is overseen by SECU, the Academic Initiative of the Southeastern Conference. SECU works to support and promote the academic endeavors and achievements of the students and faculty at the Conference’s 14 member universities.