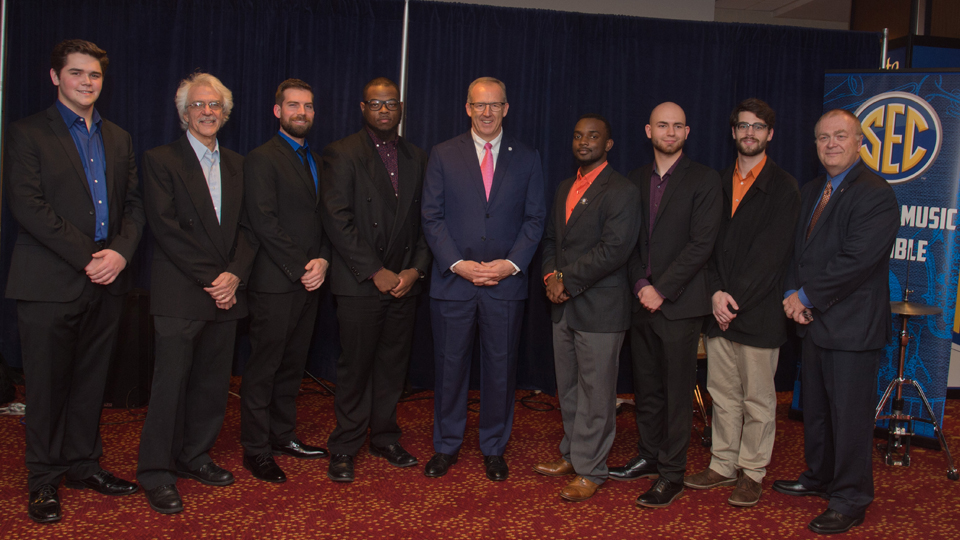 The SEC Student Music Ensemble provided the soundtrack for two events that surrounded the 2017 SEC Football Championship in Atlanta. The ensemble, which played jazz music throughout the weekend, was comprised of six SEC student musicians who performed at the SEC Legends Dinner on Friday night and SEC Pregame Hospitality Party on Saturday.

“It means a lot to be selected for the SEC Student Music Ensemble,” said Scaife. “Not many student musicians are able to say that they have done something of such a high caliber.”

One of the unique challenges for the ensemble was the improvised nature of the performances. The musicians, along with directors David D’Angelo from the University of Georgia and Michael Pendowski from Auburn, met for the first time on Friday afternoon and only had a couple of hours to rehearse. Although the students received music sheets in advance, they were pushed to sync their talents before the SEC Legends Dinner’s reception that evening.

“Jazz music is a unique and versatile genre,” said Miller. “Depending on the composer’s wishes, the possibilities are endless with what you can implement and transfigure.”

The group provided entertainment during the pre-dinner reception and during the dinner itself. SEC Commissioner Greg Sankey individually recognized the students and directors for their efforts following the performances.

Saturday’s setting was more casual as the ensemble played for SEC Pregame Hospitality Party guests prior to the 2017 SEC Football Championship. Afterwards, the group enjoyed the pregame festivities before attending the first football championship game played in Mercedes-Benz Stadium.

“Being able to mingle with fellow musicians from other states guarantees a good time,” said Scaife. “I experienced a vibe of prosperity that I would like to obtain for the rest of my life.”

This was the second time a student ensemble was invited to the SEC Football Championship and plans are already underway for the 2018 event.