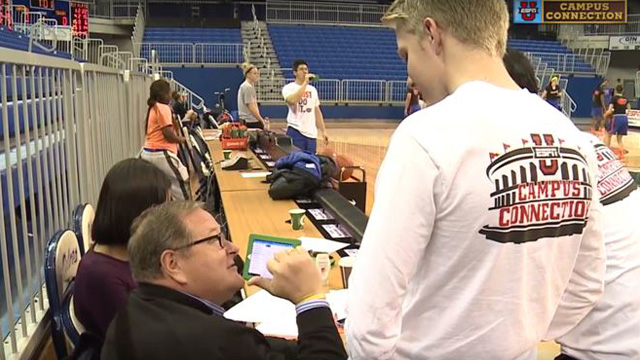 ESPNU’s Campus Connection is set to visit five SEC campuses during the next three months to broadcast men’s basketball games. ESPNU, which has partnered in this endeavor with the SEC since 2008, will next broadcast the contest between the University of Dayton and Vanderbilt University on Dec. 9.

Campus Connection gives communication students at SEC universities the opportunity to apply what they have learned in their coursework to a live ESPNU telecast. Students support the broadcast in various ways, such as stage manager, videographer and reporter.

“It showed me what it’s like to not only be behind the scenes, but also in front of the camera and what all goes into production, directing and field reporting,” said Texas A&M University student Mikayla Steinkamp, who was a field reporter during an Aggie football game this fall.

Not only will SEC students get hands-on experience, they will also have a chance to network with ESPN professionals. To date, more than 150 students have participated in an ESPNU Campus Connection broadcast.

Below is a schedule of upcoming ESPNU Campus Connection broadcasts. More dates and locations will be added throughout the spring.