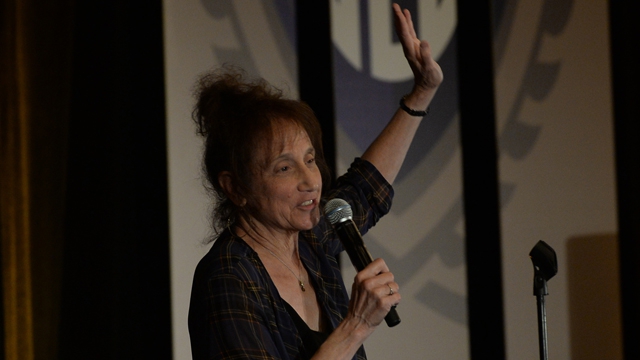 Liz Lerman has spent a lifetime rattling around in other people’s universes.

Lerman was the keynote speaker on Sunday, the opening day of the 2015 Southeastern Conference Symposium. It was a variation of that statement – one she heard a Nobel Laureate say on the radio – that characterizes much of her life’s work.

“If you bring unlikely things together, you will spark new ideas,” said Lerman, a 2002 MacArthur Genius Grant Fellow and 2011 United States Artists Ford Fellow in Dance. “It’s amazing what people will say and the things you will find out that you didn’t know. It broadens who you are.”

Lerman’s address resonated with attendees at the SEC Symposium, which in 2015 is entitled Creativity, Innovation & Entrepreneurship: Driving a 21st Century Economy.

The goal of the 2015 SEC Symposium is to explore the university’s role in preparing individuals to be creative, innovative and entrepreneurial thinkers and to evaluate the ways in which universities serve as drivers of economic development.

“Since we had creativity as a theme and Liz herself is quite the entrepreneur, I thought this embodied the Symposium,” said Lucinda Lavelli, Dean of the College of the Arts at the University of Florida, which is the lead university for the 2015 SEC Symposium. “Her keynote laid the groundwork for the creativity that fuels entrepreneurship and innovation.”

Lerman’s message on creativity personified the concept of the SEC Symposium, which is designed to address a significant scholarly issue by utilizing the range of disciplinary strengths of the SEC’s universities.

It is the idea of collaboration across disciplines and universities that Lerman believes will provide significant solutions for the challenges of the 21st century.

The collaborative approach, Lerman believes, will be most important to the university students and future leaders who will be tasked with finding opportunities from today’s challenges. It’s a method she feels that they embrace.

“The students were the first ones up to talk to me today,” Lerman said. “I really believe they can make a difference. If they look at what’s around them and bring their knowledge to bear, they can do great things. What I want to do is to give young people the tools so that they can achieve what they want to achieve.”

The 2015 SEC Symposium continues on Monday at the Hyatt Regency Atlanta.