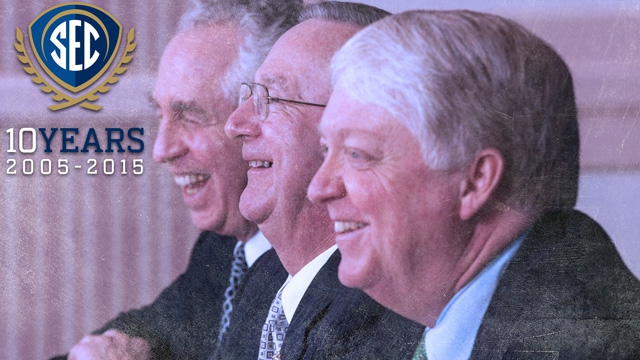 BIRMINGHAM, Ala. – The Southeastern Conference will commemorate the 10-year anniversary of its SECU academic initiative during a week-long recognition scheduled to begin on Tuesday, August 18, the SEC announced on Monday.

Originally incorporated as the SEC Academic Consortium (SECAC) in August 2005 and later reorganized as SECU, the SEC’s academic initiative was established to advance academic excellence through the collaboration of the SEC’s member universities.

The academic consortium was initially headquartered at the University of Arkansas. In 2011 it was moved to the SEC office and merged into the SEC’s administrative structure to take advantage of the resources available there, including oversight by the SEC Presidents and Chancellors.

“Our collaboration is very strong, and it is the common thread that runs through all SECU initiatives,” said Vanderbilt University Chancellor and former SECU liaison Nick Zeppos. “From the engineering student exchange program with SEC students studying abroad at the Politecnico di Torino in Italy and Italian students studying at various SEC schools – to the SEC Symposiums bringing the brightest minds together to discuss issues such as renewable energy and preventing obesity – to the SEC Academic Leadership Development Program through which we work together to prepare academic leaders – we are strengthened as our member institutions work together to achieve our shared goals.”

During the week-long recognition, the SEC will share reflections from administrators who were involved in the development of the academic consortium; spotlight programs and activities that were established prior to the reorganization and enjoy continued success today; and tell the SECU story in videos and photos, both online and through social media.